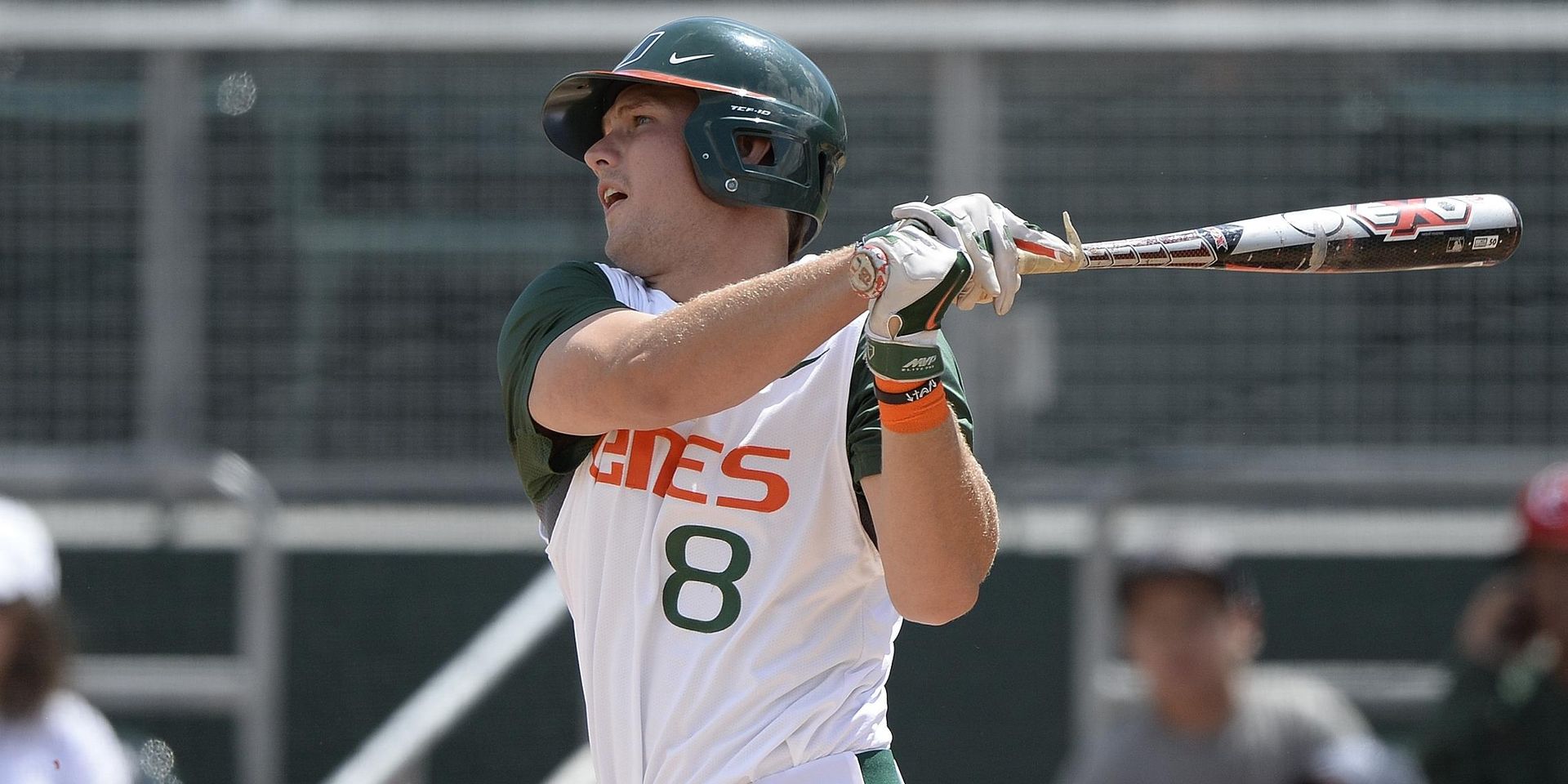 CORAL GABLES, Fla. – Junior David Thompson cracked a walk-off solo home run in the bottom of the tenth inning, and No. 19 Miami captured a thrilling 3-2 victory over NC State in its ACC home opener at Mark Light Field.

Thompson, who entered the at bat 0-for-3 on the night, delivered when it counted most against NC State’s Tommy DeJuneas to give the Hurricanes (13-6, 2-2 ACC) their third straight victory.

“It felt pretty good,” Thompson said with a smile. “I was looking for a fastball and he threw a changeup that sunk into the inside corner.

The win was Miami’s third walk-off of the season, and second on home runs.

“It’s been a lot of fun. We’ve come up big in late innings, and hopefully we continue that for the rest of the year,” Thompson said.

But Miami received a masterful performance from its bullpen, which allowed just one hit after the fourth inning. Six pitchers combined to pitch through the 10th, none tossing more than senior Sam Abrams’ 3.1 innings.

“We knew we were going with ‘Charlie Wholestaff,’ and pitch whoever we had to in the bullpen and put it together,” Morris said. “Credit to our pitching staff – they did a great job coming in and pitching in situationally and making it happen.”

Bryan Garcia earned the win with two clean innings of relief, while junior George Iskenderian finished with his fifth multi-hit effort in his last six games, including his first home run as a Hurricane.

With Zack Collins on base after a one-out walk, Iskenderian cranked a full count fastball from NC State starter Cory Wilder over the leftfield fence.

Sayles tossed just two-thirds of an inning in his start, giving way to reliever Sam Abrams in the first after allowing two singles and a walk.

But Abrams induced a groundout from Wolfpack designated hitter Ryne Willard, stranding two runners to keep the deficit at just 1-0.

Miami had a chance to tie the game in the home half of the inning, loading the bases on three consecutive walks with just one out. But sophomore Willie Abreu grounded into a 4-6-3 double play to end the threat.

With the score tied 2-2 in the fourth, Miami’s bullpen allowed just one single and one walk with seven strikeouts the rest of the way. Daniel Briggi and Michael Mediavilla each pitched one scoreless inning, while Cooper Hammond and Garcia each threw two scoreless.

“It was a big win for us. It’s great to come back and win. Their guys pitched well against us – our bullpen pitched really well,” Morris said.

Thompson’s 10th-inning at bat came just two innings after striking out with a runner in scoring position.

“I was still confident. I had a chance earlier to get a big hit with a guy at second [base], and I struck out. I was glad I had another opportunity to hopefully have a big at bat there,” he said.

The drama provided for another rewarding night for Miami and the 2,420 in attendance.