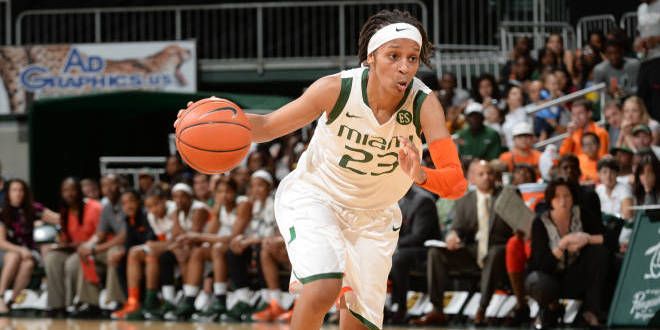 WINSTON-SALEM, N.C. – The University of Miami lost a heartbreaker to Wake Forest Thursday night at Lawrence Joel Veterans Memorial Coliseum.Sophomore guard Adrienne Motley scored a game-high 19 points for the Hurricanes, but a buzzer beater by the Demon Deacons gave them a 60-59 victory.

“The second half our defense was great, but offensively we just really struggled and the only thing that really went in, in the second half for us were our threes,” Miami head coach Katie Meier said. “A lot of our twos were good looks and we just [did not convert]. Twenty-six points in the second half is not going to win many road games, but our defense did hold them. We tried to just hang in there.”

Miami (18-10, 8-7 ACC) forced the Demon Deacons into nine first half turnovers that led to 13 points for the Hurricanes. Meanwhile, Wake Forest (11-18, 2-13 ACC) had just three points off turnovers before the break.

The Demon Deacons got hot from beyond the arc in the opening 20 minutes though, connecting on 6-of-9 attempts from long range. A 32 percent three-point shooting team on the season, their 18 points off threes accounted for over half their total before the intermission.

Miami also was hot from deep in the first half, shooting 6-of-13 (46.2 percent) from three-point land, with Motley going 3-of-4. The Newport News, Va. native made five of her six field goal attempts in the first frame and led all players with 14 points and three assists at the half.

Wake Forest held a one-point advantage, 34-33, as the teams entered the locker room, but Miami had some momentum after scoring seven of the final 10 points before the break.

The Demon Deacons came out strong to open the second half and took a six-point lead, 51-45, with 9:53 to play. Miami had an answer though as it quickly countered to take the lead just minutes later.

Motley knocked down her career-high fourth three-pointer with 7:28 on the clock to put the Hurricanes on top 52-51.

“I think we were getting it done from the three-point line tonight and she had great numbers there,” Meier said of Motley’s play. “She actually was getting a little frustrated, but when you look at her numbers, she was 50 percent from the field, 50 percent from three, so great job.”

A free throw by redshirt senior Jassany Williams with 5:58 remaining would make it an 8-0 Miami run.

Wake Forest ended a four-minute scoreless drought with a three-pointer by senior guard Millesa Calicott with 5:39 left to re-take a one-point lead.

The teams would play back and forth basketball the rest of the way, including continuing to exchange three-point baskets. Redshirt junior Michelle Woods hit a triple right in front of the Miami bench to put the Hurricanes up 59-58 with 2:20 left, drawing a huge cheer from her teammates and coaches.

Not another point was scored until the clock showed triple zeroes. Wake Forest freshman guard Amber Campbell hit a buzzer beater to give the Demon Deacons a 60-59 win.

Woods and Williams both scored nine points for the Hurricanes in the defeat. All of Woods’ points came off three-pointers.

Calicott set career highs with 18 points and five made three-pointers for Wake Forest. Demon Deacon senior forward Dearica Hamby, the third leading scorer in the ACC at 19.9 points per game, was limited to nine points on 3-of-15 (20 percent) shooting by the Hurricanes.

“Well, we did a great job on [Hamby] and they needed a career high from their other senior [and she] hurt us from the outside, but the kids played defense tonight,” Meier said. “We just got to put a complete game together on the road and Wake Forest played extremely well, they did a great job, but we need to play better basketball this time of year.”

Miami will head home for its final game of the regular season. The Hurricanes face No. 9/8 Florida State Sunday, March 1 at 3:00 p.m. at the BankUnited Center in Coral Gables, Fla. It will be senior day for the trio of Suriya McGuire, Necole Sterling and Jassany Williams.