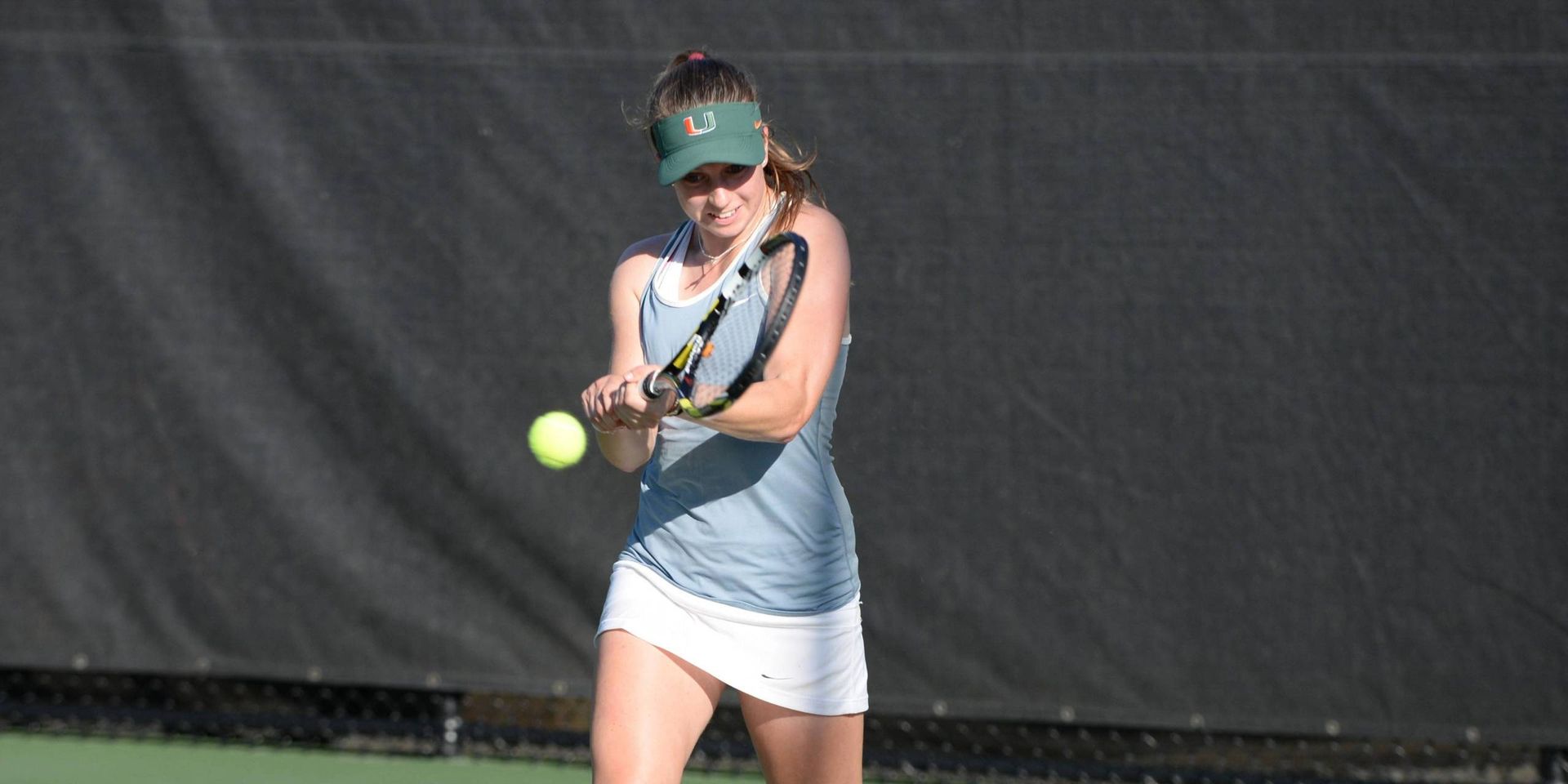 @HurricaneTennis Rolls to 6-1 Win over FGCU

CORAL GABLES, Fla. – The University of Miami dominated FGCU in its final match before ACC play gets underway next week.

The ninth-ranked Hurricanes used some new lineups in both doubles and singles en route to downing the Eagles 6-1 Friday night at the Neil Schiff Tennis Center.

“Really proud of the freshmen,” Miami head coach Paige Yaroshuk-Tews said. “To have four freshmen out there playing four out of six spots, I think just says a lot about the future of the program.”

Miami (4-2) began play by cruising in doubles action, led by the No. 17 ranked pair in the nation, senior Monique Albuquerque and junior Clementina Riobueno. The duo took down Julianna Curtis and Johanna Sterkel, 8-1, with Riobueno clinching the win on a ferocious slam.

Playing together for the first time all year, senior Lina Lileikite and freshman Silvia Fuentes impressed in their doubles match as well. They defeated the FGCU (2-7) pair of Candela Munoz Giron and Breana Stampfli, 8-2, to give Miami the doubles point.

Junior Stephanie Wagner and freshman Sinead Lohan paired up for the first time all year as well and their match was left unfinished with them leading 6-4 over Elizabeth Means and Sarah Means.

“It gives us a little flexibility going forward,” Yaroshuk-Tews said of the new lineups for the Hurricanes. “Sinead and Steffi seemed to play pretty good doubles together. We might get a different look at three. Two [Albuquerque and Riobueno] is starting to turn the corner and really starting to put their foot on the gas, so I’m happy to see that. And then giving the kids different opportunities to play different spots in singles was big. As a freshman, [for Sinead Lohan] to come out here and play on court one, it’s a big deal. So, overall I was happy with what they did.”

After helping Miami win the first doubles match, Albuquerque was the first player to win a singles match as well. The senior quickly defeated FGCU’s Curtis, 6-2, 6-2.

A bit after that, Miami won a quartet of matches in a fairly short burst. First it was Fuentes who defeated Elizabeth Means, 6-1, 6-1, an impressive showing for the Ciudad Rodrigo, Spain native.

Needing one more victory to clinch the match, it was Wendy Zhang who provided it. The No. 98 ranked player in the country, Zhang knocked off Candela Munoz Giron, 6-1, 4-6, to give Miami the victory.

Although the result was decided, there were still matches to complete. Riobueno won 6-3, 6-3 over Breana Stampfli and then Lohan battled past Sarah Means, 6-0, 7-5. Lohan trailed 4-0 in the second set before coming back to win it and take the match.

While Miami does have one more conference match left on its schedule on March 17, the Hurricanes enter ACC play Friday, Feb. 27 against Wake Forest.

“It seems like once you start ACC play, everything is just kind of a blur,” Yaroshuk-Tews said. “If you’re not ready to play you’re going to have your tail handed to you and the girls know that and the level has to be high beginning Friday, but I think we’re ready. I think we’re ready and it’s only going to make us better.”

Action against the Demon Deacons, ranked No. 51 in the nation, will begin at 4:00 p.m. at the Neil Schiff Tennis Center.