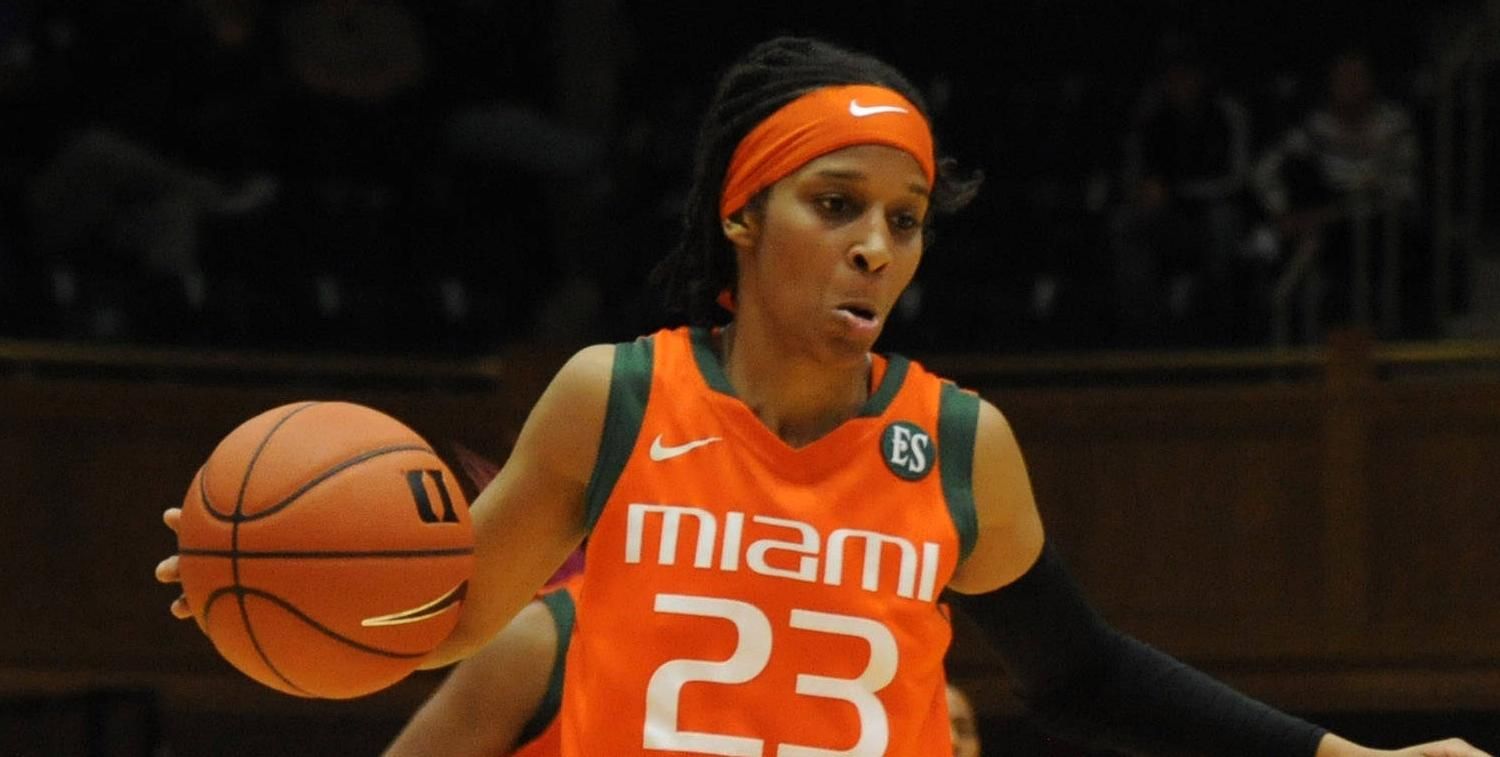 RALEIGH, N.C. – The University of Miami fell to NC State in a tough, hard fought contest, 68-65, Thursday night at Reynolds Coliseum.Miami sophomore guard Adrienne Motley had a game-high 27 points on 11-of-16 shooting (68.8 percent) from the field in what was a tale of two halves.”We just need to recognize when she’s having a night like that and get her more shots late in the game, but that was a great performance by her,” Miami head coach Katie Meier said. “I thought the four guards, the two from NC State [Len’Nique Hoskin-Brown and Miah Spencer] and then Chelley [Woods] and Mot, were just pretty special.”

After being held at arm’s length for much of the first session, NC State cut the deficit to one, 23-22, with exactly four minutes left before the break.

Then, the Hurricanes took over for the remainder of the half.

Redshirt junior Michelle Woods hit her third three-pointer of the game, then Motley knocked down consecutive threes and just like that the Miami (18-8, 8-5 ACC) lead ballooned to 10.

The Hurricanes were not done yet though as senior forward Necole Sterling got a steal and passed to sophomore guard Jessica Thomas, who hit senior guard Suriya McGuire for a transition bucket.

Sterling then drilled a three-pointer on Miami’s next possession and freshman forward Erykah Davenport followed that up with a layup to make it a 16-0 run for the Hurricanes in under three minutes.

NC State (15-11, 6-7 ACC) scored with five seconds left to stop its scoreless drought, but that would not be the final basket of the half. Motley got down the court and pulled up from three-point range just before the buzzer sound and drilled her third three-pointer in the final four minutes of the half.

Motley’s long range jumper made it a 19-2 run for Miami entering the break and the Hurricanes led 42-24 as they entered the locker room.

Motley scored 17 points in the first 20 minutes on 7-of-9 shooting, including 3-of-4 from long range. Woods added 13 before the intermission on 5-of-8 shooting, including a 3-of-5 mark from beyond the arc. Both players set season highs for first half points.

Miami outscored NC State 9-0 in fast break points in the opening session and had an 11-4 advantage in assists.

Woods scored the first two points after halftime to make it a 21-2 run for Miami and a 20-point Hurricane lead.

NC State would not go away though and closed to within nine points, but Miami’s dynamic backcourt duo quickly responded. Woods hit a three-pointer and Motley made a jumper to push the advantage back up to 14 with 13:22 to go in the game.

From there, NC State managed to battle back and tie the game, but did not take the lead until there was 2.6 seconds on the clock. Redshirt senior Len’Nique Brown-Hoskin hit a deep, contested three-pointer that put the Wolfpack ahead for good, as Miami’s last second shot would not fall.

“The fact that they cut it close didn’t surprise me, but at the end of the game, honestly, credit to NC State for some of the shots that they did hit,” Meier said. “They make special shots. They’re a talented team in that sense.”

After shooting 8-of-15 (53.3 percent) from three-point range in the first half, Miami went 1-of-9 (11.1 percent) beyond the arc after the break and the Hurricanes missed a pair of good looks from long range in the final minute and a half.

In addition to leading all scorers in the contest, Motley finished with eight rebounds to tie her career best.

Woods tied a career-high with 20 points and also equaled her career best with four made three-pointers. The Naples, Fla. native played a career-high 34 minutes and pulled down five rebounds, which marked the fourth time in the last five games she has posted five-plus rebounds.

“She was great,” Meier said of Woods. “I just think with Nigia Greene, we couldn’t use her in the second half, she was a little gimpy, so that really hurt our rotations with the guards and they were just, I think, somewhat exhausted, so Chelley was doing really well, but towards the end there, I think some of her turnovers were just [because] she was just exhausted, and that’s on me.”

McGuire had a solid all-around game for the Hurricanes with five points, five assists and seven rebounds. The five assists matched her season best and tied her with sophomore guard Jessica Thomas for the game high.

Brown-Hoskin finished with 20 points for the Wolfpack, while sophomore guard Miah Spencer added 19.

Miami held NC State to 7-of-25 (28.0 percent) shooting from three-point range, but two of its makes came in the final minute of the game, first to tie the score and then to take the lead.

“It’s just that time of year where someone’s got to step up and take control of the game and make sure that we don’t lose a game like this because this one’s tough,” Meier said, “but you pack up, you go home, you get your legs back, and get ready for a very, very talented North Carolina team.”