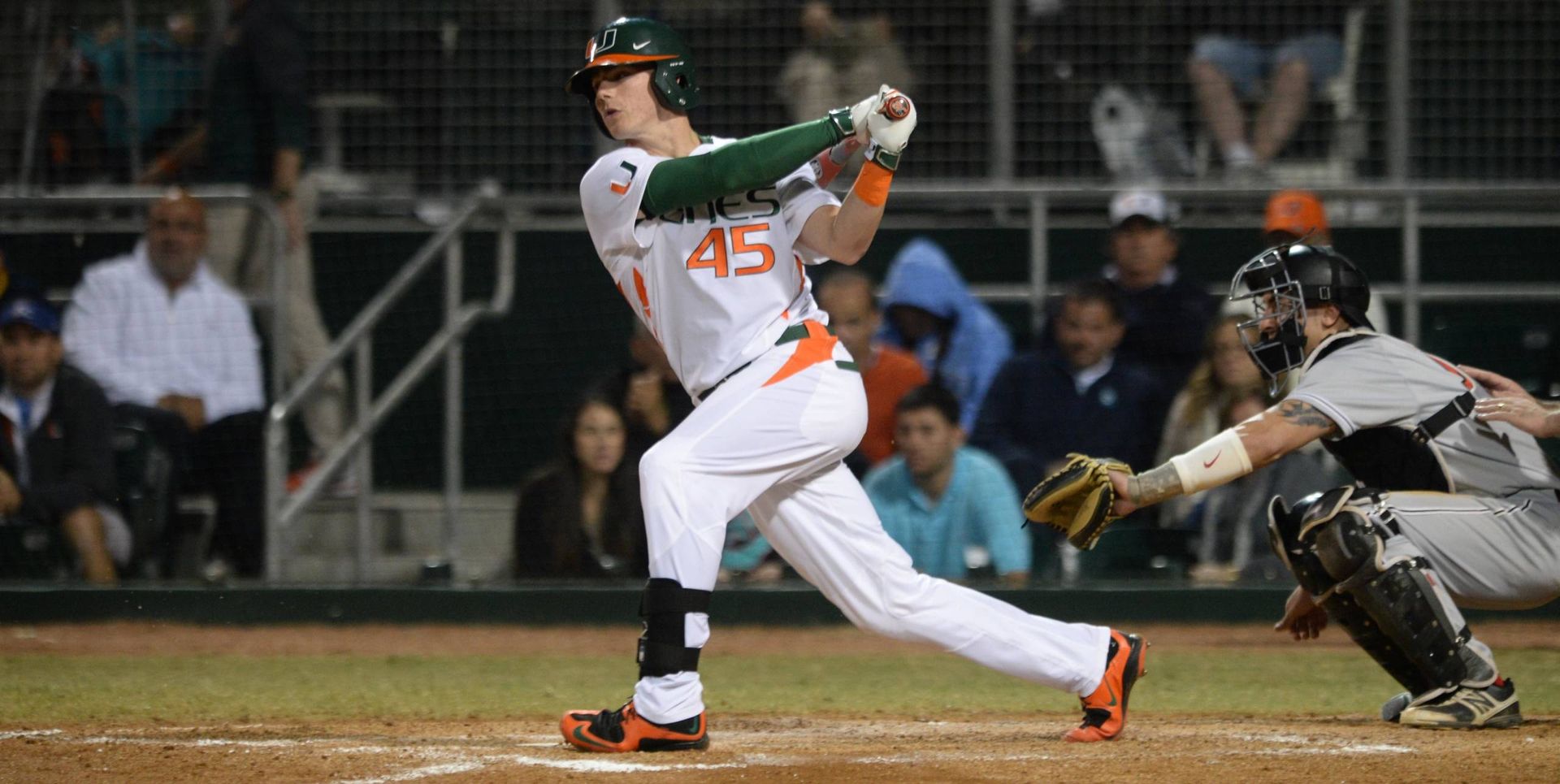 BOCA RATON, Fla. – An eighth-inning solo home run from freshman Carl Chester gave No. 8 Miami a chance to steal a road win, but FAU plated two eighth-inning runs of its own, and the Hurricanes fell to the host Owls 5-3 at FAU Baseball Stadium.

Chester tied the game 3-3 with his first career home run, but FAU loaded the bases against Cooper Hammond and Michael Mediavilla, scoring runs on a wild pitch and a sacrifice fly to seal the victory.

Trailing 3-0 for most of the game, Miami staged a dramatic seventh-inning rally that cut the deficit to just one run. Chester extended his hitting streak to five consecutive games with a single to open the inning, and wound up on third base after a hard-hit liner from sophomore Zack Collins was mishandled by FAU outfielder Christian Dicks.

An RBI groundout from sophomore Willie Abreu plated Chester to make it 3-1, while FAU’s second error of the inning – this one an errant throw from shortstop CJ Chatham on a groundball from junior David Thompson – plated Collins for Miami’s second run of the inning.

Miami might have tied the game two batters later, but a groundball off Garrett Kennedy’s bat hit baserunner George Iskenderian in between first and second base for the unlucky final out of the inning.

“I think it was a little bit of a lack of concentration,” Iskenderian said of the play. “I saw the ball the whole way. I think I should have jumped earlier or stepped on the brakes. That can’t happen, there’s no excuse for it.”

Chester once again came through for the Hurricanes, however, belting a no-doubter to left field off FAU reliever Bo Logan an inning later. Chester’s home run was the first extra-base hit of the night for either team.

“The encouraging thing was we came back late and tied the game up. Again, we made some mistakes late that you can’t make…if you don’t play well, you don’t win.”

Chester said connecting on his first home run as a Hurricane felt “amazing.”

“It was a fastball up and in,” Chester said of the pitch. “I just got around on it, and put a good swing on it.”

FAU (4-0) jumped out to a lead by the second inning, as sophomore righthander Derik Beauprez was tagged for three runs on six hits by the talented Owls offense.

A failed pickoff attempt of Brendon Sanger opened the game’s scoring, as Brett Lashley hustled from third during a relay on the basepaths and beat the throw home from second baseman Edgar Michelangeli. An RBI single from Owls third baseman Ricky Santiago made it 2-0, and a balk from Beauprez with runners on second and third made it 3-0 in favor of the hosts by the bottom of the second.

Miami stranded five runners in the game’s first two innings, including a bases-loaded situation in the first. Walks to Ricky Eusebio and David Thompson sandwiched around a single from Willie Abreu loaded the bases for Iskenderian, but the hot-swinging junior popped out to FAU shortstop CJ Chatham in shallow center for the final out of the first.

The Hurricanes stranded 12 runners on the night.

Sophomore lefthander Danny Garcia was effective in relief, throwing 2.2 scoreless innings after entering to open the third inning. Redshirt junior righthander Ryan Otero followed up Garcia with 1.1 scoreless innings of his own.

After connecting for 21 hits their last time out against Rutgers, the Hurricanes struggled to string together offense off FAU starter Brandon Rhodes after the second inning. The lefthander kept Miami off balance through his six-inning outing, striking out four hitters while allowing just five singles.

Rhodes exited after 97 pitches, giving way to the Owls bullpen.

“He’s good. He’s beat us twice before. He has good stuff, he can move the ball, and he can pitch,” head coach Jim Morris said. “He has good breaking stuff, he’s hard to run on. He does a lot of good things.”

Miami immediately found success in the seventh, as Chester opened the inning with a single off Owls reliever Reily Monkman. Despite the late theatrics, FAU regained its lead and held on late.

“They played better than we did. We made too many mistakes mentally and physically. We didn’t play well enough to win,” Morris said afterwards.

The Hurricanes travel to No. 6 Florida this weekend for a rivalry series with the host Gators at McKethan Stadium. First pitch for Friday’s opener is set for 7 p.m.