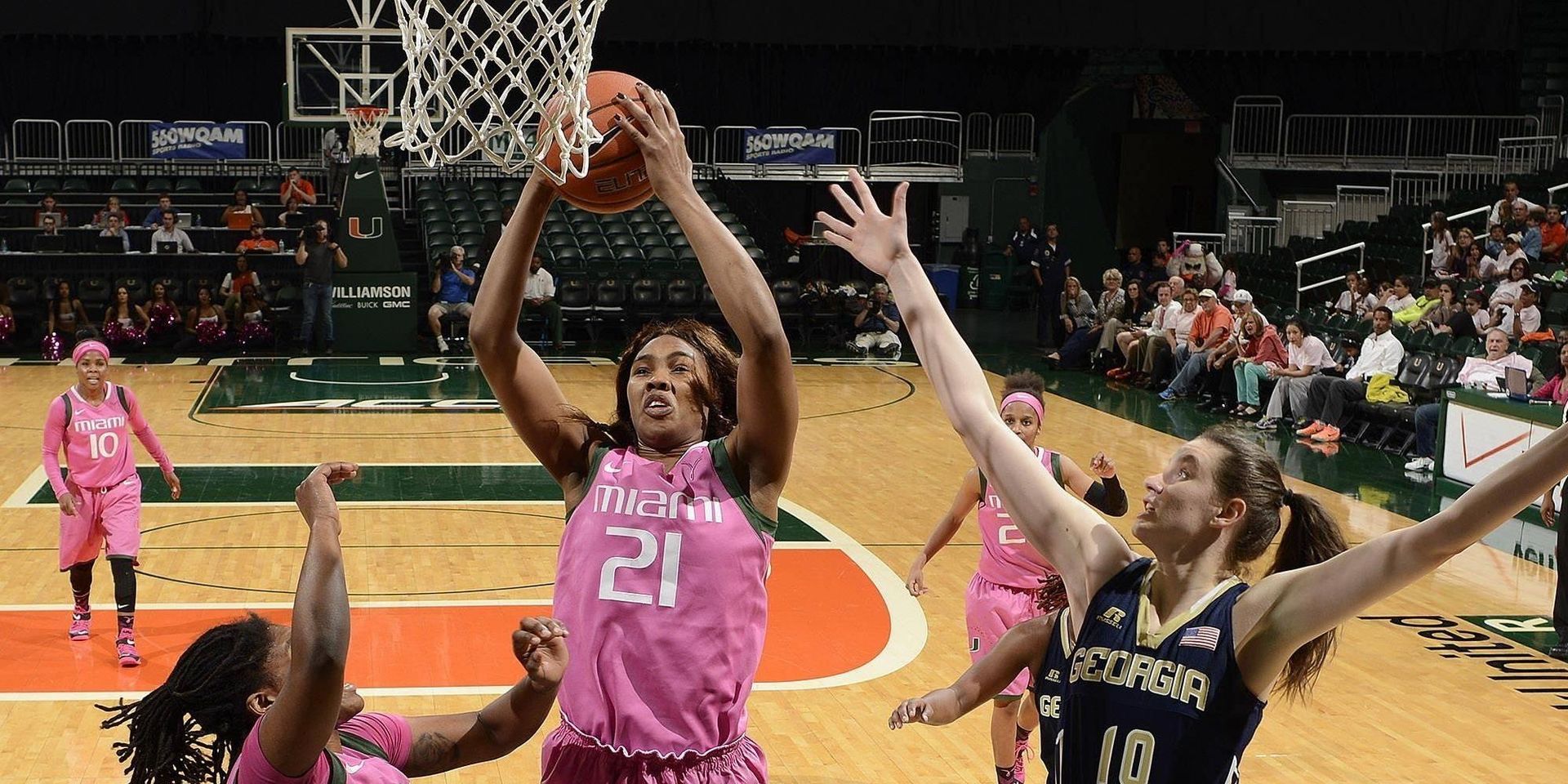 CORAL GABLES, Fla. – The University of Miami staged a tremendous comeback to defeat Georgia Tech Sunday at the BankUnited Center, battling back from a 10-point deficit with fewer than four and a half minutes to go.

The Hurricanes closed the game on a 15-0 run over the final 4:17 to pick up a 64-59 victory and remain undefeated at home in ACC play.

“The seniors did special things and if they want this season to be as special as I think it can be, they need to step up and win the game like that,” Miami head coach Katie Meier said. “The veterans, Chelley [Woods] and the three seniors, were amazing.”

Sophomore guard Adrienne Motley had a superb game and paced all scorers with 18 points, including nine in the first nine minutes, but it was Miami’s upperclassmen who made the biggest plays down the stretch.

Georgia Tech went on a 10-0 run to take a 59-49 lead with 4:46 to go, but 29 seconds later a pair of free throws by senior forward Necole Sterling began the Hurricanes’ charge to victory.

Redshirt junior Michelle Woods knocked down a three-pointer to slice Miami’s deficit down to five with 3:56 to go. Woods then drained a pair of free throws and Motley followed that by making one of two from the line two make it a two-point game with 2:20 left.

A steal by freshman forward Erykah Davenport with 1:50 remaining gave the Hurricanes a chance to tie the game or take the lead. They did the latter.

Miami missed a three-pointer, but it went out of bounds off a Georgia Tech (14-12, 4-8 ACC) player. Another Miami miss was rebounded by Davenport to keep the possession alive and Meier called timeout and subbed in redshirt senior Jassany Williams, who would change the game.

The Davie, Fla. native came in, grabbed three consecutive offensive rebounds and then found Woods, who buried a three-pointer to give Miami the lead with 33 seconds to play.

Williams then blocked a shot at the other end, which led to Woods being fouled and she calmly hit both shots to put Miami up by three with 11.1 ticks left.

Back on defense, senior forward Suriya McGuire got in the passing and tipped the ball off a Yellow Jacket and out of bounds with one second left. Sterling then added two more free throws to ice the game and give Miami a 64-59 win.

“Chelley was really one of the few people that I saw on her face that she was not rattled by the deficit. She was a little bit frustrated, but she was encouraging. She was trying to uplift her team,” Meier said. “The first three was all her and the second three was off of Jazz’s heroic rebounding effort. So, it just came time. Ray Ray wasn’t having her best game, but in the end she gets this monster tip and gets us possession to where we can seal the game off.”

Woods finished with 13 points, shot 3-of-5 from three-point range and made all four of her free throw attempts. She also tied for the team lead with six rebounds.

Redshirt freshman guard Nigia Greene had one of the best games of her Miami career against her hometown school, as the Atlanta native scored 11 points, matched a career best with three steals and finished at plus-16 in the plus-minus column, the only player on either team in double digits.

Miami held Davis, the Yellow Jackets’ leading scorer, and junior guard/forward Aaliyah Whiteside, their third leading scorer, to a combined 8-of-26 (30.8 percent) shooting from the field.

The Hurricanes wore pink jerseys as a part of Sunday’s Play 4Kay game, which many schools across the country do this week. The series of games is named for Hall of Fame coach Kay Yow, who passed away of breast cancer in 2009.

“My favorite quote from Coach Yow was, ‘When life kicks you, let it kick you forward.’ And I said, ‘We’re going to get kicked around a little bit tonight, just remind yourselves to just get kicked forward and operate in a lot of positivity,’” Meier said. “And I thought that, that was really crucial because there was plenty of reason to lose faith tonight, plenty of reason, but there’s just bigger things that happen in the world so we we’re going to just give it our best effort.”

Miami returns to action Thursday when the Hurricanes face NC State on the road. The game is set for 7:00 p.m. at Reynolds Coliseum in Raleigh, N.C.