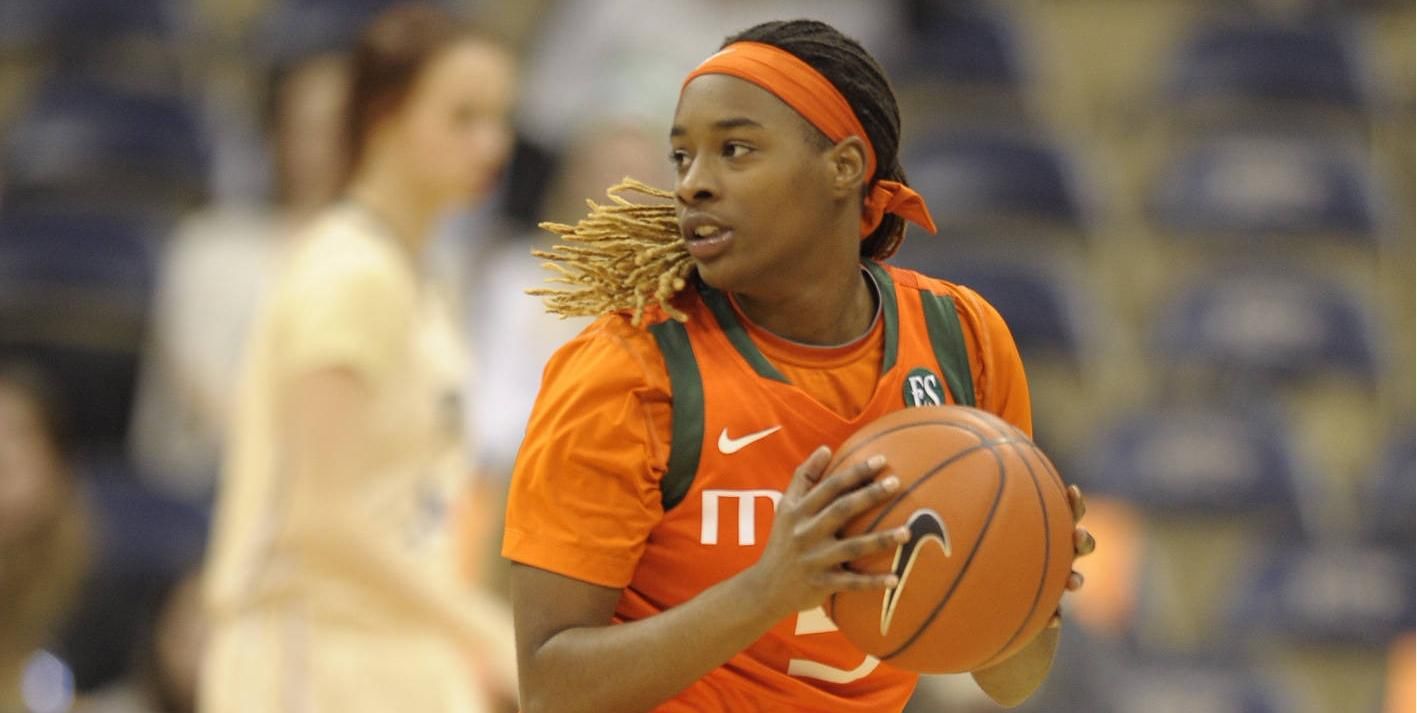 PITTSBURGH – Playing its fourth consecutive Sunday road game, the University of Miami fell 81-66 Sunday at Pittsburgh’s Petersen Events Center.Miami (15-6, 5-3 ACC) and Pittsburgh played a superb back-and-forth first half and it was Michelle Woods who was the main story for the Hurricanes in the opening session.

The redshirt junior guard scored 11 straight points for the Hurricanes, connecting on a trio of three-pointers and a tough bucket in the paint.

“She was just really strong with the ball and they were giving [Adrienne] Motley a lot of attention so it opened up some lanes for Chelley and I thought she had a great recognition,” Miami head coach Katie Meier said.

It marked the first time all season that Woods recorded double digits in the first half and she scored all 11 in a span of under five minutes.

Freshman forward Eykah Davenport also provided a big spark off the bench for Miami before the break. She recorded seven points and four rebounds in 10 minutes of first half action. Twice Davenport grabbed an offensive rebound after a missed free throw and scored.

Senior guard Suriya McGuire also had seven points at halftime and shot 5-of-6 from the stripe in the opening 20 minutes.

“I think we got hurt a little bit, we had the lead by one . . .  and then [Michelle Woods] asked for a sub,” Meier said. “She kind of cramped up and I think that really hurt us and it allowed Pittsburgh to sort of close the half, which took a little bit of the wind out of our sails.”

Pittsburgh finished the half on an 11-5 run after Woods’ exit, including scoring the final six points of the session. Then, the Panthers opened the second on a 12-2 run for a 15-point advantage with 16:25 to go.

With quite a bit of time to play, the Hurricanes would not cave. Miami countered with a quick 12-4 spurt to make it 53-45 with 13:30 on the clock. A three-pointer from sophomore Jessica Thomas, who played just three minutes in the first half due to foul trouble, capped the Miami run.

Pittsburgh was able to maintain its lead though, as the Panthers got hot minutes later from three-point range and would not let the Hurricanes get any closer. At one point, Pittsburgh last four made field goals were from beyond the arc.

“We needed our posts to step up today,” Meier said. “I challenged Jazz [Williams], Erykah and Khaila [Prather] and Erykah really responded.”

Michelle Woods finished with 11 points, while Suriya McGuire chipped in with 10 points on 8-of-10 shooting at the line and also led all players with nine rebounds.

Miami returns to the court for its first home game in over two weeks when it hosts Virginia Tech Thursday, Feb. 5 at 7:00 p.m. at the BankUnited Center.

“Well, the conference is about who you play, where you play them and when you play them,” Meier said of returning to the BUC for a home game. “We’re in a tough stretch right now. The wheels haven’t fallen off by any stretch of the imagination, but you go on the road and you’re missing just 10 percent of your defensive effort, you’ll lose. Well, we were missing 20 percent of our defensive effort tonight against quite possibly the best point guard in the league.”

The Hurricanes defeated the Hokies 62-45 in Blacksburg, Va. in their ACC road opener Jan. 11.