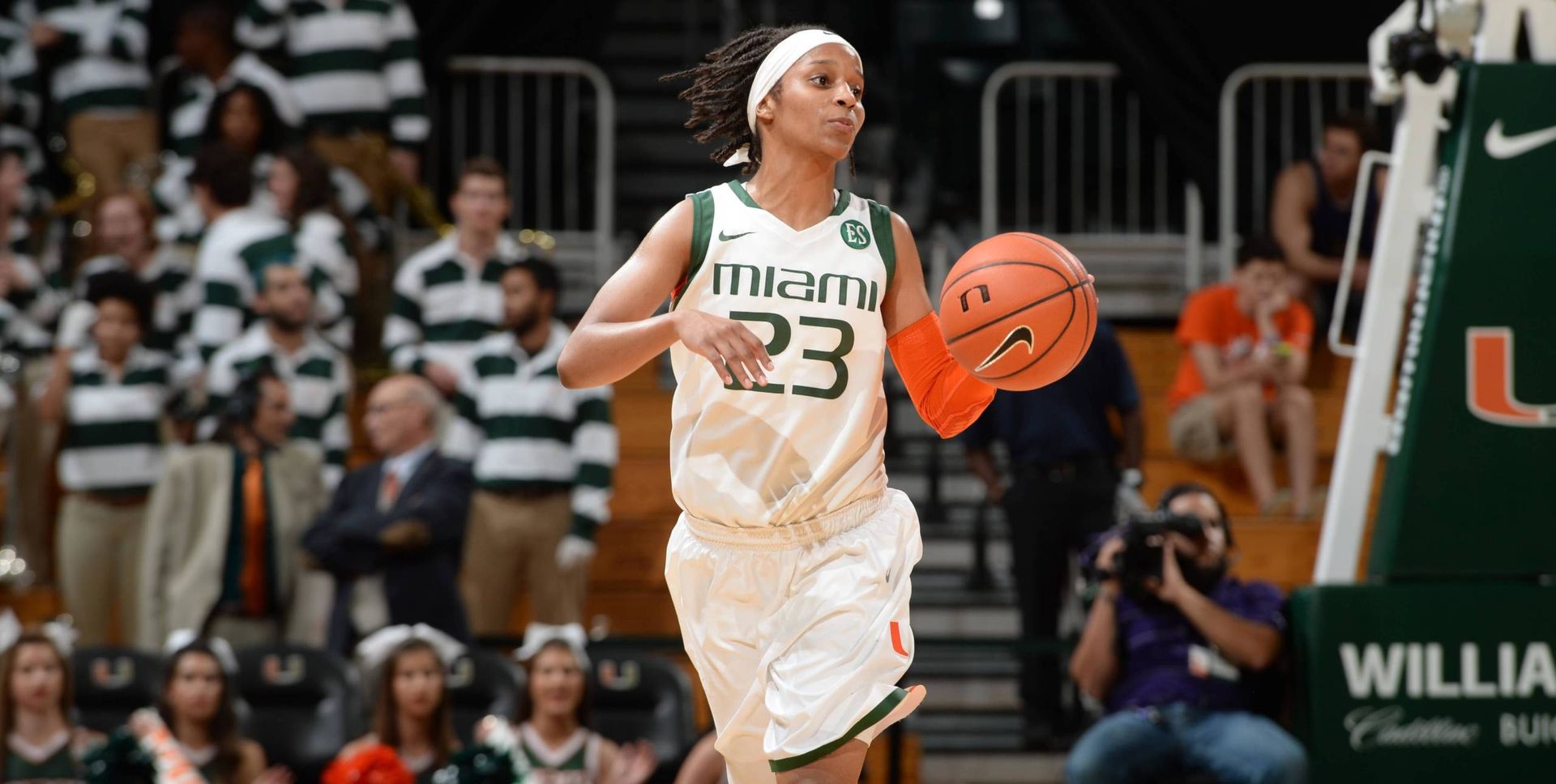 @MiamiWBB Falls Short at No. 4 Louisville

LOUISVILLE, Ky. – The University of Miami put an early scare into the fourth-ranked Louisville Cardinals Sunday at the KFC Yum! Center.

Playing in front of a boisterous crowd of 9,887, the Hurricanes led by as many as 13 points in a 68-55 defeat, despite tremendous effort from the visitors.

“I was proud, we played very hard,” Miami head coach Katie Meier said. “I think at halftime [I felt] we had played a little too hard in the first half . . . You get a lead in the first half on the road you get all excited. The other team’s going to come back. That’s ACC basketball.”

The Hurricanes were led by Adrienne Motley during the stretch, as the sophomore guard caught fire from the field. She scored 11 of the first 19 points by either team and made each of her first five field goal attempts.

“Just the game plan,” Motley said of what helped the team get off to such a fast start. “Coach told us we need to get open shots off of ball screens and we were just executing that.”

Motley shot 6-of-8 from the field in the first half and entered the break with 14 points to lead all scorers, but she was not the only Hurricane who impressed in the opening 20 minutes.

Redshirt senior Jassany Williams had six points, including a pair of jumpers, and two blocks, one of which was a ferocious swat that drew big cheers from the Miami fans behind the team’s bench. Senior forward Necole Sterling had five points at halftime and senior guard Suriya McGuire had five rebounds.

Miami led by as much as 13 in the first half, but the talented Cardinals would not cave. At halftime it was 31-27 Hurricanes.

Louisville (18-2, 6-1 ACC) opened the second half by continuing its strong play and in just under two minutes managed to grab its first lead since a 2-0 scoreline.

From there the Cardinals continued to extend their advantage. The Hurricanes went on a 14-4 run late in the game to cut the deficit to seven with 3:07 to play, but it was not quite enough.

In a battle between two teams tied for first place in the Atlantic Coast Conference, the Hurricanes came up just short.

“We got a lot of young kids out there that are getting unbelievable game experience on the road. We finished that game very young,” Meier said of what she takes away from this game. “As long as we take these lessons and we figure out what it takes to win–we’ve held off at home, but on the road we just got to grow up a little bit. This is a game we won’t forget, we’ll learn from it.”

The Hurricanes have a full week until their next game, which will be Sunday, Feb. 1 at Pittsburgh. The game is scheduled for 1:00 p.m. at the Petersen Events Center and will be broadcast on ESPN3.