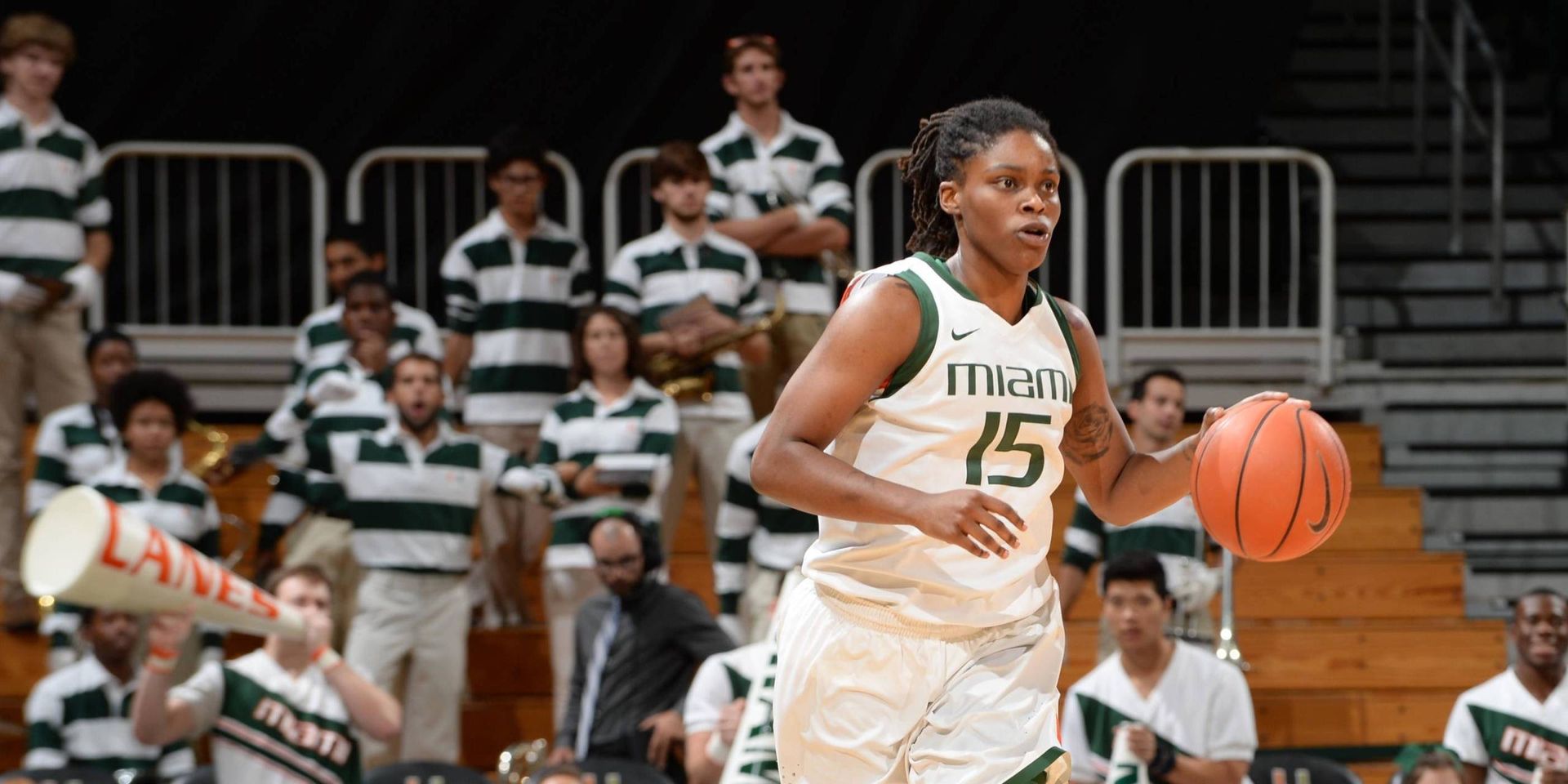 CORAL GABLES, Fla. – The University of Miami returned home to host Clemson Thursday night at the BankUnited Center and put together a tremendous performance against the Tigers to remain undefeated in ACC play.

Miami led 23-19 with seven minutes left in the first half and then took hold of the game. The Hurricanes rattled off a 19-0 run in fewer than five minutes to grab a 42-19 lead with 2:29 to go before the break.

“If you don’t love this team yet, you’re missing something because they’re a lovable bunch,” Miami head coach Katie Meier said after the team’s 12th win in its last 13 games. “Defense means everything, defense is fun. I think one thing about this team that I love is that what other teams don’t like to do, we love to do.”

Senior forward Necole Sterling, making her second consecutive start, was a key cog in the run for the Hurricanes. She opened it with a three-pointer, hit a jumper and had a three-point play to give her eight of Miami’s 19 points on the run.

The Hurricanes’ defense was also tremendous during the stretch, as Miami held Clemson (9-9, 1-4 ACC) scoreless for nearly six and half minutes.

After grabbing hold of the large lead, Miami kept its advantage the same for the remainder of the half, going into the break ahead 45-22.

Sterling had 11 points at the intermission, as did sophomore guard Adrienne Motley, who was named the espnW National Player of the Week and ACC Player of the Week Monday. The pair combined to shoot 7-of-10 from the field and 4-of-5 from three-point range in the first half.

The Hurricanes outrebounded Clemson 24-11 in the opening 20 minutes, including a 12-1 margin on the offensive glass. Miami also outscored Clemson 16-4 in the paint in the first half.

“Our posts are willing to do the dirty work,” Meier said. “I’m asking them to score a little bit more now. I really want to see it, so we try to get the ball inside to them a little bit.”

Miami opened the second half the same way it closed the first half, scoring the first 13 points after coming out of the locker room to grab a 36-point lead. The early second half surge included two three-pointers from Sterling, one from close to NBA range.

Miami held the Tigers scoreless for the first five-plus minutes of the second half. Combining the charges to close the first half and open the second, Miami went on a 35-3 run. That included a stretch of over 14 minutes where Clemson did not make a shot from the field.

Despite their large lead, the Hurricanes continued to play hard the rest of the game and did not let the Tigers get within striking distance at any point.

Necole Sterling recorded 17 points to lead all scorers. The Los Angeles, Calif. native shot 6-of-9 from the field, 4-of-6 from three-point range and made her lone free throw. Sterling has scored 15-plus points three times in the last seven games for the Hurricanes.

“Unbelievable, we needed it from her. It was a great response, I’m so excited and proud of her,” Meier said of Sterling’s play in the win. “Every shot was a real good rhythm shot, but every shot she took was because she did something on the defensive end, and so she knew she had the green light. In our system, if you do something on defense, you get to shoot on the other end. If you’re not working on defense, you’re not allowed to take a shot. She’s doing both right now.”

Miami shot 10-of-21 from three-point range, with five different Hurricanes connecting from long range. The 47.6 percent clip from beyond the arc is the best for Miami this season.

The Hurricanes also had twice as many rebounds as Clemson, finishing with a 44-22 advantage on the boards.

Senior wing Nikki Dixon led Clemson with 10 points, but the Hurricanes held her to just 3-of-12 (25.0 percent) shooting from the floor.

Miami will hit the road for its next game, as the Hurricanes head to Durham, N.C. to face Duke Sunday, Jan. 18. The teams will square off at 1:00 p.m. at Cameron Indoor Stadium.