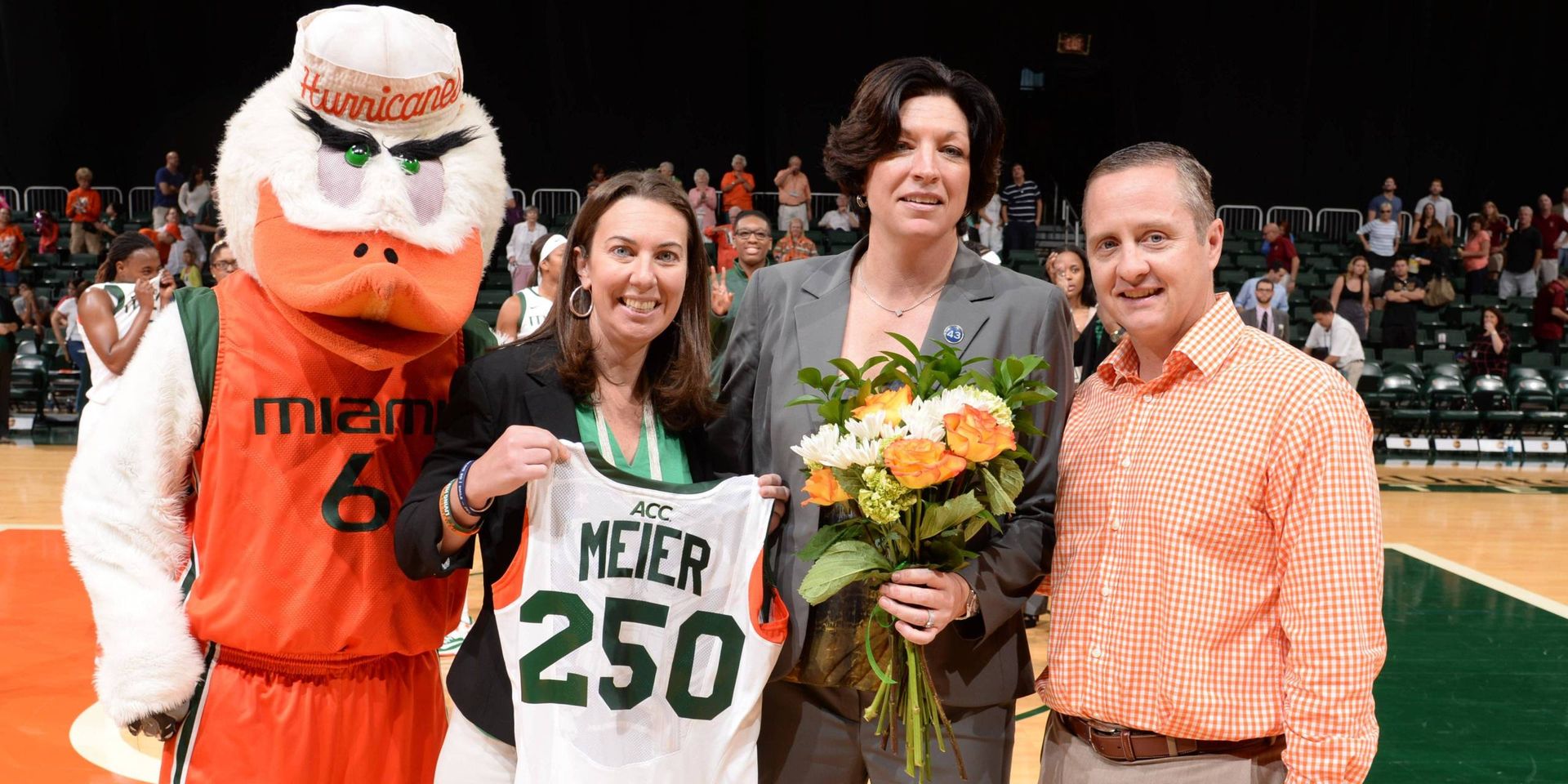 CORAL GABLES, Fla. – In the University of Miami’s first game of 2015 and its opening ACC contest of the season, head coach Katie Meier achieved a special milestone.

Miami’s 74-53 win over Boston College Sunday afternoon at the BankUnited Center gave Meier her 250th victory in 14 years as a head coach.

“They were standing there—great administration—with the flowers and jersey [after the game], which is so sweet, and the college president is on the court. And I just don’t think many women’s basketball coaches get that kind of love across the country,” Meier said. “I don’t think 250 [wins at many schools will mean afterwards]  stop the game and fans stay and your players stand there and you got the deputy AD and the AD and the president and the AD’s wife and all these wonderfully supportive people who are here for you. When you reach a milestone as an individual, it’s just, wow, isn’t that a cool for moment for the fact that we’ve built a great thing here.”

Meier averaged over 18 wins per year in her first 13 campaigns as a head coach and already has 11 this season. In her 10 years at Miami, Meier has posted 174 victories, including 124 since the start of the 2009-10 season.

Meier’s 250th win was never in much doubt, as the Hurricanes did not trail at any point in the contest against Boston College (8-6, 0-1 ACC).

Sophomore guard Adrienne Motley opened the scoring with an impressive three-point play, helping set the tone early for the Hurricanes. Miami (11-3, 1-0 ACC) would quickly seize control of the game, jumping out to a 22-7 lead in the first 10 minutes.

“I think they really are excited about the game plan,” Meier said of why her team has had so many hot starts this season. “We try to keep things kind of simple, but the details that we insist upon, when they do them and it works, I think they really get a lot of energy.”

The advantage would balloon to 20 just minutes later after a pair of three-pointers by freshman forward Laura Quevedo made it 30-10. That marked the third straight game where Miami held a lead of at least 18 points in the first half.

The Eagles played well down the stretch before the break, cutting Miami’s advantage to 11, 34-23, entering the locker rooms.

Nine Hurricanes scored in the opening 20 minutes, led by Adrienne Motley with seven. Laura Quevedo had six points at the break to go along with five rebounds, tying the first half game high.

Despite trimming their deficit down to 11 at halftime, Boston College never got within single digits in the second half.

A big reason for that was the way Miami shot the ball from beyond the arc after the break. In the first four and a half minutes of the second session, Miami shot 4-of-4 from three-point range, with Quevedo and sophomore guard Jessica Thomas each making two.

“I really said we got to be better than [our first half number of] 5-for-16 from the three this half, but the game is going to be decided the first four minutes and they responded,” Meier said of the barrage of three-pointers to open the second half. “And we did it with threes, but they were timely threes and they were Miami threes and nobody forced one and it was good.”

Adrienne Motley added another three-pointer just over two minutes later to make the Hurricanes 5-of-6 from deep to start the half and give Miami a 54-29 lead with 13:53 left.

The Hurricanes would go on to build their lead as high as 30 before winning by a final score of 74-53.

Adrienne Motley led all scorers with 16 points on 6-of-9 shooting to go along with four rebounds, three assists and a career-high five steals.

Laura Quevedo finished the game with four three-pointers to set a career high. The Madrid, Spain native posted 13 points and a game-high eight rebounds in the victory.

“She was awesome today,” Meier said of Quevedo. “Awesome in more so the rebounding, she really does covet the ball and once it’s kind of in her rebound radius, people don’t get it from her.”

The Hurricanes will be back in action Thursday, Jan. 4 when the Notre Dame Fighting Irish come to the BankUnited Center. Miami will face off against the 2014 NCAA Tournament runner-up at 7:00 p.m.