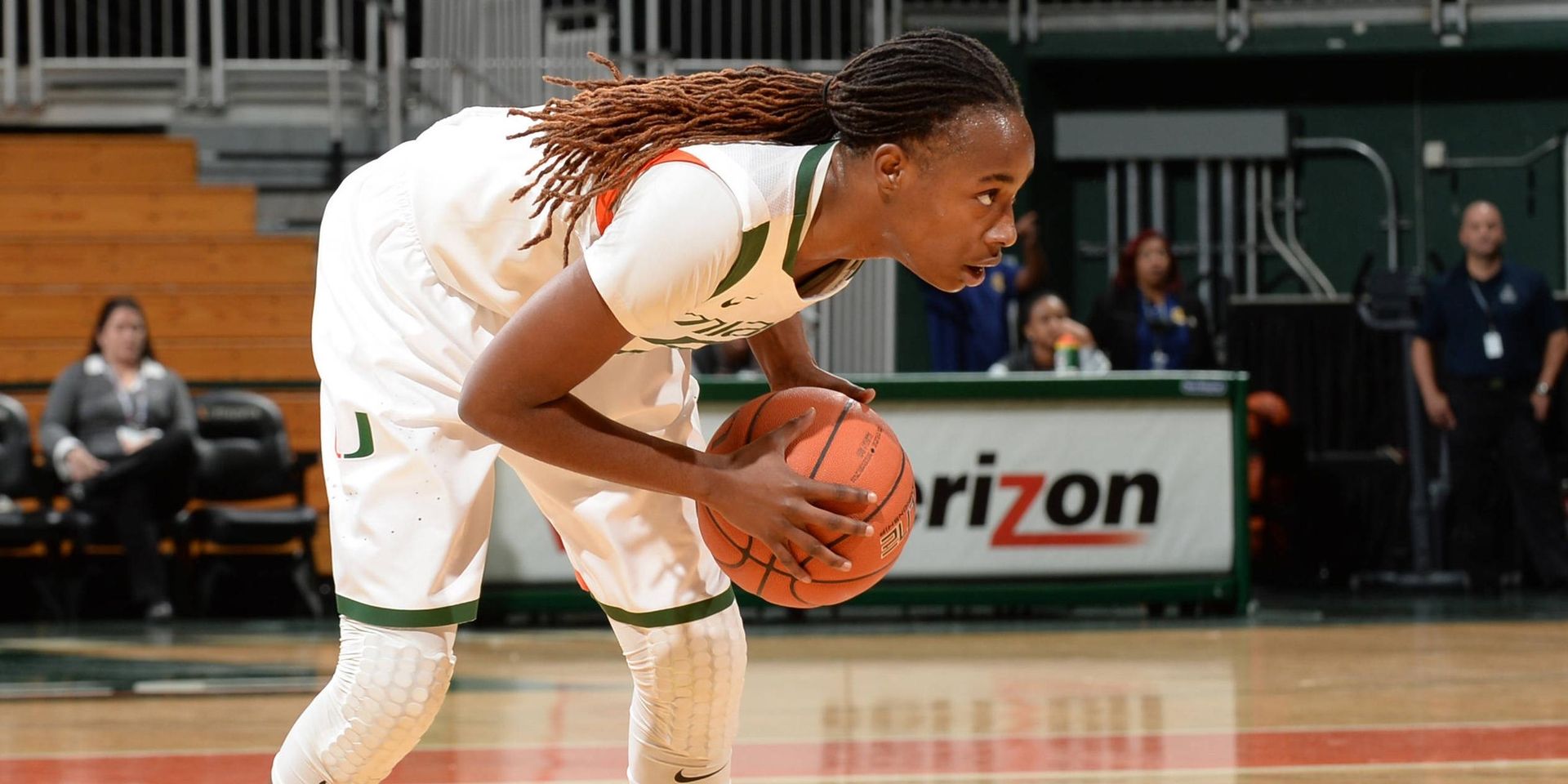 CORAL GABLES, Fla. – After six days without a game, it took the University of Miami about 13 minutes to really get going against Coppin State Saturday afternoon at the BankUnited Center.

Once the Hurricanes got in the groove, they reeled off a big run and went on to defeat the Eagles with a convincing 70-54 victory.

“We’re an energy team and I know Coppin was trying to slow it down and break our rhythm and we were doing everything we could to force tempo and to let our defense dictate our offense and so finally I think we got that going,” Miami head coach Katie Meier said.

With seven minutes left in the first half, Miami (7-2) was up 16-13 over Coppin State (1-8) and the Eagles were very much sticking around in the game. Coming out of a media timeout with 6:39 showing on the clock, senior guard Suriya McGuire hit a pair of free throws to start what would become a big surge for the Hurricanes.

Sophomore guard Jessica Thomas and senior forward Necole Sterling both made three-pointers and just like that Miami had a double digit lead that it would not relinquish at any time.

The Hurricanes scored four more points before Coppin State found the bottom of the net and the 12-0 run pushed the team’s advantage to 15 with 3:11 left before the break.

A Coppin State three-pointer ended its scoreless drought, but Miami scored the next five points to make it a 17-3 run. The Eagles scored the final two points of the half to make it 33-18 Miami at the intermission.

Suriya McGuire had seven points, four rebounds and two steals entering the locker room and was Miami’s main catalyst in the opening 20 minutes.

Freshman forward Khaila Prather also provided a huge boost for Miami down the stretch of the first half, scoring five points in 65 seconds, more than she had scored in any game of her young career. The Upper Marlboro, Md. native also had three rebounds, one assist and one block in her eight minutes on the floor before halftime.

“She’s special and she’s been working really hard,” Meier said. “I think both Khaila and Erykah [Davenport], they’re really understand what we need from them. And we have the saying ‘Do what you do’ and I think that’s what she did for us today. She finished around the rim, which was really important and then in our presses and our traps she frightens me and I’m 60 feet away on the sideline so I know their point guard doesn’t like it. [She is] just unbelievable, quick and long and great work ethic.”

The Eagles cut their deficit to 10 with 12:58 to play, but Jessica Thomas responded with a three-pointer at the other end and Miami quickly reasserted itself in the game.

Suriya McGuire continued to bring impressive energy at both ends of the floor in the second half and helped lead the charge to victory.

The Minneapolis native finished the game with 10 points, five rebounds and three steals. She also shot 8-of-10 at the free throw line, with both numbers surpassing her season high and the eight makes setting a new career best.

“I love getting her to the free throw line, it’s a big key to what we’re doing,” Meier said. “And she picked her spots and did a nice job and waited for ball reversal before she attacked and things that we’ve been working on with her. I just think she’s an amazing player and she’s got tremendous athletic ability and we’ve got to take advantage of her God-given gifts.”

The win over Coppin State gives Miami a 6-1 record in its seven game homestand. The Hurricanes will next travel to New Orleans for the Tulane/DoubleTree Classic. Miami faces UCLA (3-4) Thursday, Dec. 18 at 6:00 p.m. and then meets Tulane (7-1) the next night at 8:00 p.m.

Miami’s next games at the BankUnited Center will come Dec. 28 and 29 in the Miami Holiday Tournament.