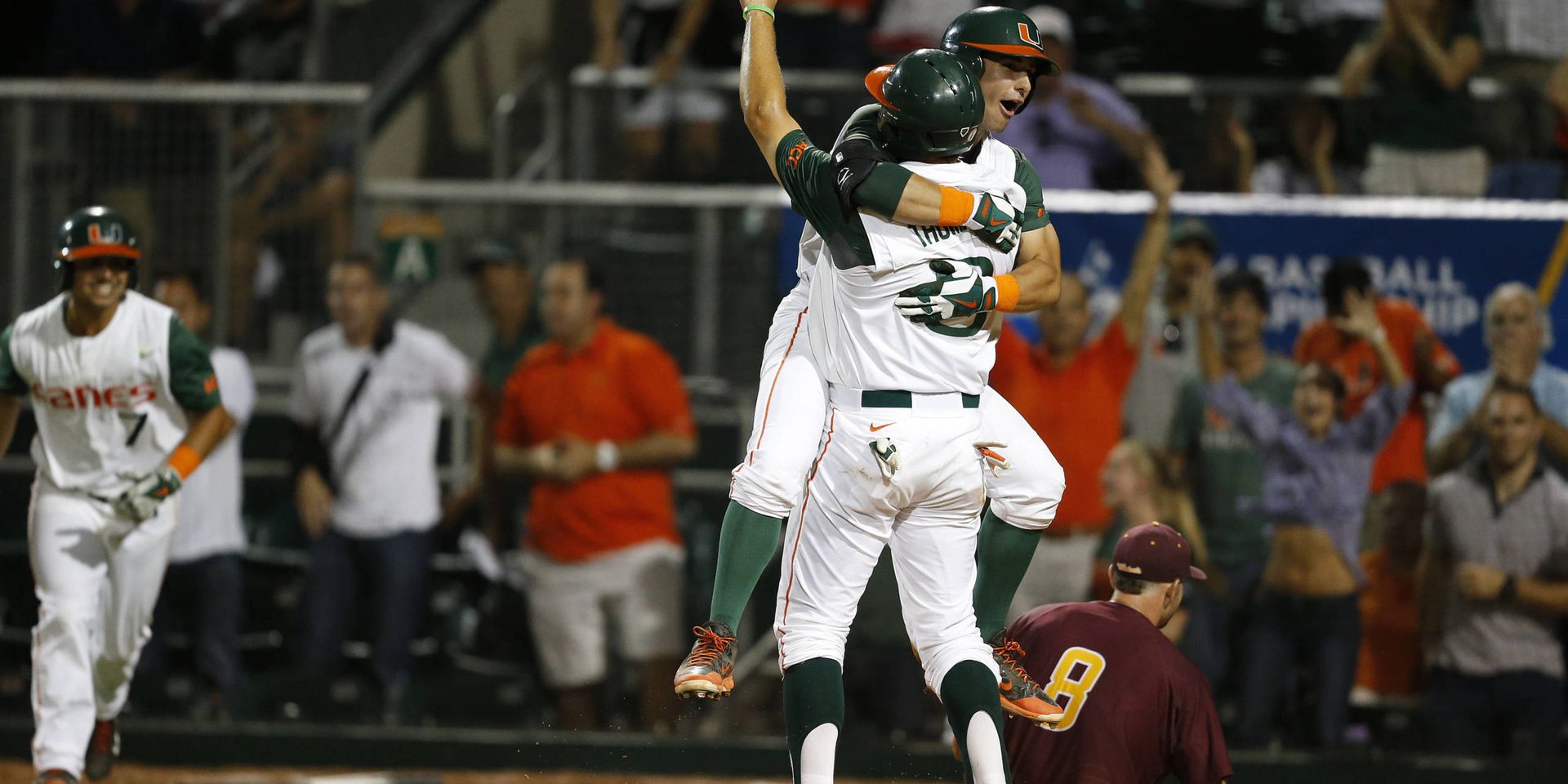 CORAL GABLES, Fla. — Top-seeded Miami opened its run at the 2014 NCAA Coral Gables Region in thrilling fashion Friday night, toppling No. 4 Bethune-Cookman 1-0 on a walk-off wild pitch in the bottom of the ninth inning.

With David Thompson on third base and Brandon Lopez at first, a pitch from Wildcats reliever Scott Garner to freshman Johnny Ruiz made its way past catcher Zach Olszewski and towards the Mark Light Field backstop. Thompson raced home and slid in safe, beating Olszewski’s throw to Garner and sending his teammates and the crowd of 1,843 into a frenzied celebration.

The win advanced Miami (42-17) into the winner’s bracket of the Regional, and set up a matchup with second-seeded Texas Tech to be played Saturday night at 7 p.m.

“They have a really good club, and they’re well-coached… it’s just a great win for us,” Morris said. “You just have to find a way to win and that was a crazy way to win it.”

Not to be outdone by his team’s late theatrics, redshirt sophomore Andrew Suarez tossed the first complete-game postseason shutout by a Hurricane since David Gutierrez in a win over Jacksonville on May 31, 2009. The dominant outing by Suarez (6-3), who tied a career high with 10 strikeouts on the night, occured over nine shutout inning and just 94 pitches.

Morris said his standout lefthander would have returned to the mound in the tenth if the game needed extra innings.

In a brilliant pitchers’ duel, Miami struggled to generate much offense off Bethune-Cookman starter Montana Durapau through his seven innings of work. Though they forced a season-high four walks out of the righthander, Durapau allowed just three hits and struck out five batters to keep the Wildcats (26-32) in the game.

“Yeah, he was unbelievable; he has been all year,” Bethune-Cookman coach Jason Beverlin said. “I’ll put him up against anybody’s number one…he’s pitched that way no matter where we go. We could go play Washington, Miami—it doesn’t matter.”

After being subdued by Durapau for much of the night, the Hurricane offense awoke in the ninth, when Thompson was hit by a pitch from Garner (1-4) and Lopez laced a single to right to put runners on the corners.

Thompson might not have had an opportunity to score the gamewinner if not for a defensive miscue by Wildcats rightfielder Josh Johnson on the play that allowed him to take third. After missing most of the season, Thompson said the win was especially sweet.

“It was awesome. It’s just a blessing to be back out on the field. You know I didn’t play that well today but I found a way to get on base,” Thompson said. “Andy pitched a heck of a game and we just found a way to win. It was an amazing feeling.”

Lopez finished the night 2-for-3 – the only Hurricane to record more than one hit in the contest – and reached base three times.

With Ruiz facing a 1-0 count, Garner’s pitch got away from Olszewski and gave Thompson the chance to be the hero.

“We called a changeup low and we weren’t going to give that guy anything to hit,” Garner said of the pitch. “It just got away from the catcher a little bit—things happen. I saw the runner coming and thought we had a chance, but it just didn’t work out for us.”

Four of the seven hits allowed by Suarez occured in the game’s first three innings. The Miami, Fla., native settled down after a rocky start, however, and kept the Wildcats largely off-balance and entirely off the scoreboard.

“I felt like all of my pitches were working and my command got better as the game went on,” Suarez said. “I was leaving some down the plate and they were getting some hits and then after that I just worked on keeping the ball low.”

Suarez had tossed nine innings in three games this spring prior to Friday night: March 15 against Georgia Tech, April 12 against Pittsburgh and April 26 against Clemson. He exited all three of those games with no-decisions, despite allowing a combined total of three runs in 27.0 innings.

“We played some good defense and of course Lopez got the big hit right-center to get Thompson to third,” Morris said. “We don’t want to forget that and all the things that happened tonight.”

The Hurricanes will battle the Red Raiders tomorrow night at 7 p.m. in a game slated for broadcast on ESPN3. In an elimination game, third-seeded Columbia – who fell 3-2 to Texas Tech in Game 1 of the Coral Gables Regional – will face Bethune-Cookman at 2 p.m.