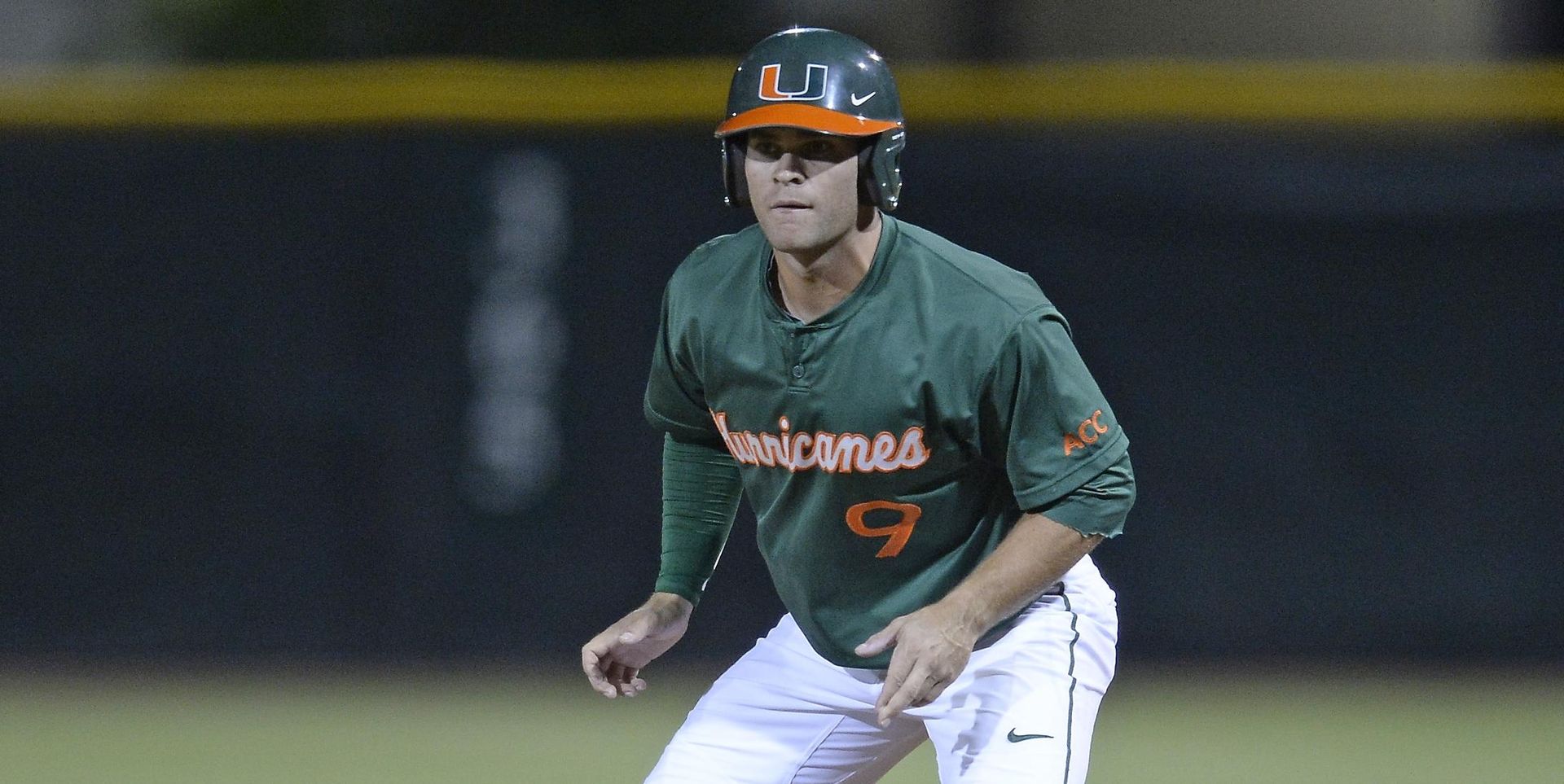 CORAL GABLES, Fla. — No. 5 Miami reeled off its 22nd win in its last 24 tries Wednesday night, completing a season sweep of visiting Florida Gulf Coast with a 7-3 win at Alex Rodriguez Park at Mark Light Field.

After earning an extra-innings victory against FGCU at Hammond Stadium on March 19 and recording a 4-0 home win on March 26, Miami used a well-balanced offensive attack to finish off the three-game sweep.

“It was a good win for us. You never know when exams are over with exactly how you’re going to play,” head coach Jim Morris said.

Five different players recorded at least one RBI in the win, while senior Tyler Palmer paced all hitters with a career high-tying three hits and two RBI.

“Our top four hitters have done a really good job the last couple of weekends,” Palmer said. “The top of the order has been seeing the ball well, and the bottom of the order has come up big for us lately too.”

Sophomore Thomas Woodrey, with help from freshmen Cooper Hammond and Bryan Garcia, combined to allow zero runs over the game’s final 4.1 innings, with Woodrey improving his personal record to 4-0 in the win.

Sophomore Johnny Ruiz made his return to the lineup after missing the past nine games with a labrum injury. Ruiz, who pinch hit for starting third baseman Laz Rivera in the third inning, finished 1-for-2 with a run scored.

“It feels good. I was out for two weeks, and it was tough watching the team,” Ruiz said of his return. “Even though we were playing well, it was tough. You always want to play – I’m competitive, it’s just my nature to want to be out there and help my team the best I can.”

Miami (35-14) jumped out to an early 3-0 lead, plating a run in the first and two more in the second in support of senior righthander Javi Salas.

Dale Carey was issued a walk to lead off the bottom of the first, and took third on a perfect hit-and-run in tandem with Palmer. Freshman Willie Abreu capitalized on the scoring opportunity, connecting on an RBI groundout to second to plate Carey and make it 1-0 in favor of the Hurricanes.

“I thought in that first inning, Abreu had a great at bat,” Morris said. “He hit the ball up the middle, which is what we work on in that situation…a lot of guys contributed, and overall it was a good game for us.”

FGCU starter Nick Deckert (6-5) did well to limit the rally, however, getting a groundout of senior Alex Hernandez for the final out of the inning and stranding Palmer at third.

The hosts tacked on two more in the second on another big hit from Palmer. Walks to freshman Laz Rivera and Carey, as well as a single from senior Brad Fieger, set the stage for Palmer, who had already extended his hitting streak to a career-best 11 games with a single in the first.

The Pembroke Pines, Fla., native came through for the Hurricanes, lacing a one-out single to left to make it 3-0.

“He started me off with a change-up and missed, then he went with a fastball away for a strike,” Palmer said of his at bat. “I figured he’d go back to a change-up…I drove it to the outfield, and it was lucky that it fell.”

Salas pitched his way out of a two runners-on jam in the first, but FGCU struck for two unearned runs in the third after two Miami’s defense committed back-to-back errors in the frame. An error charged to freshman catcher Zack Collins on a weak dribbler up the third base line loaded the bases, and a groundball from Eagles first baseman Nick Rivera then snuck under the glove of Miami third baseman Laz Rivera to score two runs.

Salas worked his way out of it again, however, inducing a nicely turned double play on a ground ball from Cody Hoffner to escape any further damage.

Miami would respond, chasing Deckert after forcing the lefthander into over 60 pitches in just 2.1 innings. A sacrifice fly from Fieger in the third inning off Eagles reliever Garrett Anderson moved Miami’s lead back to two runs at 4-2.

Salas, who allowed three unearned runs on the night, was relieved with two outs in the fifth by Woodrey. The lefthander came up with a big strikeout of pinch hitter Kevin Young for the final out of the fifth, leaving the bases loaded and keeping Miami in front 4-3.

Miami tacked on a run in the sixth on an RBI single from Carey and two more in the seventh on a two-RBI double from Brandon Lopez.

Three players extended career-best hitting streaks in the victory: Palmer (11), Abreu (nine) and Ruiz (six), while freshman Zack Collins failed to reach base for the first time in the last 21 games.

Palmer said his team was satisfied with a successful end to its nonconference schedule, which helped Miami equal its win output from the 2013 regular season (35).

“It feels good. Every midweek team we play is very good, good competition,” Palmer said. “It prepares us for the weekend so we’re ready.”

No. 5 Miami will wrap up its 2014 road schedule in Tobacco Road this weekend, beginning with Friday’s series opener against No. 30 Duke at Durham Bulls Athletic Park. First pitch for game one, set for broadcast on WVUM 90.5 FM and WVUM.org, is set for 6 p.m.