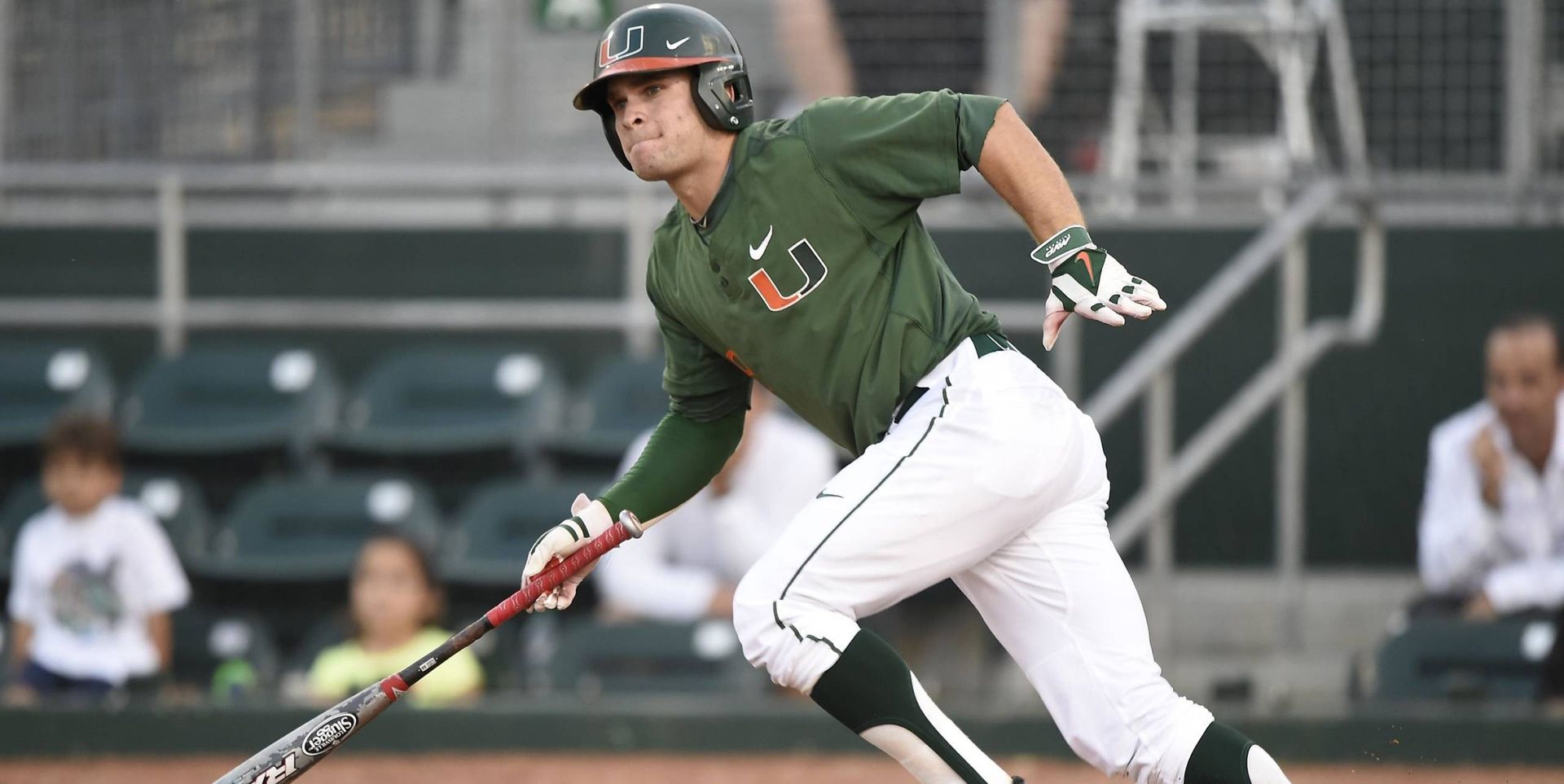 CLEMSON, S.C. — In a pitcher’s duel at Doug Kingsmore Stadium that required 12 innings to complete, No. 11 Miami captured its fifth straight ACC series with a thrilling 3-2 victory over No. 20 Clemson.

With the game knotted up at 1-1 through 11 innings, the Hurricanes took a decisive lead with two runs off Clemson reliever Drew Moyer in the 12th. An RBI double from senior Tyler Palmer put Miami ahead 2-1, while an RBI single from red hot Zack Collins – who extended his hitting streak to seven straight games in the victory – scored Palmer to make it 3-1.

Freshman closer Bryan Garcia allowed a run in the bottom of the 12th, but he struck out pinch hitter Jon McGibbon for the final out to earn his 13th save of the spring.

The game-winning hit was Palmer’s second in the past week.

“I’ve always loved those situations,” he said. “It comes with being a captain – the team is always relying on its leaders to get the job done. I’ve been seeing the ball well, and that’s the big thing in those at bats…I’ve embraced it.”

With the win, Miami clinched its second straight series victory over the Tigers and extended its winning streak over Clemson to five straight games dating back to 2013.

“It’s huge,” Palmer said of the series victory. “It’s nice to get a win here, especially with the atmosphere and fans. It was a really big win for our team.”

A low-scoring affair was expected with two of the ACC’s best pitchers on the mound. Taking the hill opposite one of the conference’s ERA leaders in Tigers righthanded ace Daniel Gossett, lefthander Andrew Suarez more than held his own for the visiting Hurricanes.

Suarez, who had a disappointing effort last time out against Notre Dame, rebounded by allowing just one run over 9.0 innings to help guide Miami to sole possession of first place in the ACC. He struck out seven batters and walked none in another sparkling outing, lowering his season ERA to 2.53 in front of 5,588 fans.

“I knew coming in today, facing Gossett – one of the best pitchers in the ACC and maybe even the country – I had to have my ‘A game’,” Suarez said. “Keeping the ball low and throwing my offspeed pitches for strikes was the key today.”

For the third time this season, Suarez tossed nine full innings but came up with a no-decision. He threw 97 pitches, giving way to the Hurricanes bullpen at the start of the 10th inning.

“I had 97 pitches in the last inning and I wanted to go one more, but I respect the coaches’ call,” Suarez said. “I knew the bullpen would do well, like they have all year.”

For the second consecutive night, Miami jumped out to an early 1-0 lead. The Hurricanes (31-13, 18-5 ACC) struck for a run off Clemson ace Daniel Gossett in the game’s first inning, tagging the righthander on an RBI single from freshman Willie Abreu. Senior Tyler Palmer, who connected on a one-out double to left-center, scored easily on the bloop hit to shallow left field.

Clemson (25-18, 12-10 ACC) tied the game in the third, when the Tigers offense strung together three singles to plate a run. With one out, Steve Wilkerson drove a pitch from Suarez into leftfield to score a run, tying the game 1-1. With two runners on base and still just one out, Suarez did well to limit the damage. The lefthander retired Garrett Boulware on a flyout and struck out Steven Duggar, stranding both Tigers and keeping the score locked at 1-1.

Suarez would settle down after the third to cruise through the game’s middle innings, matching Gossett by allowing just three singles through the seventh. Suarez struck out seven batters on the night – just three shy of his season high – to keep his team in the game. With 60 punchouts through his first 11 starts, the Miami, Fla., native has already surpassed his season strikeout total from 2013 (53).

Unfortunately for Miami’s offense, Gossett delivered a brilliant outing of his own. The righthander fanned a career high-tying 13 strikeouts, scattering seven hits and allowing one run in the first before exiting after nine full innings. He walked four batters on the night, but kept Miami off the scoreboard for his final eight innings.

“He has great stuff, he throws everything for strikes…he’s a great pitcher,” Palmer said. “I thought Andy did a heck of a job dueling with him, and that’s all we could have asked from him.”

Edgar Michelangeli opened the 12th with a walk, and was substituted for senior pinch runner John Lawroski. After a sacrifice bunt from Dale Carey moved Lawroski to second, Palmer laced a 1-2 pitch into the left-center gap to plate the go-ahead run. Collins, who bumped his average to .295 with a 2-for-3 performance, then drove Palmer in with a single to right to pad the Hurricanes’ lead.

No. 11 Miami wraps up its series with No. 20 Clemson Sunday afternoon at Doug Kingsmore Stadium. First pitch for game three, scheduled for broadcast on CSS with ESPN3 simulcast, is set for 1 p.m.