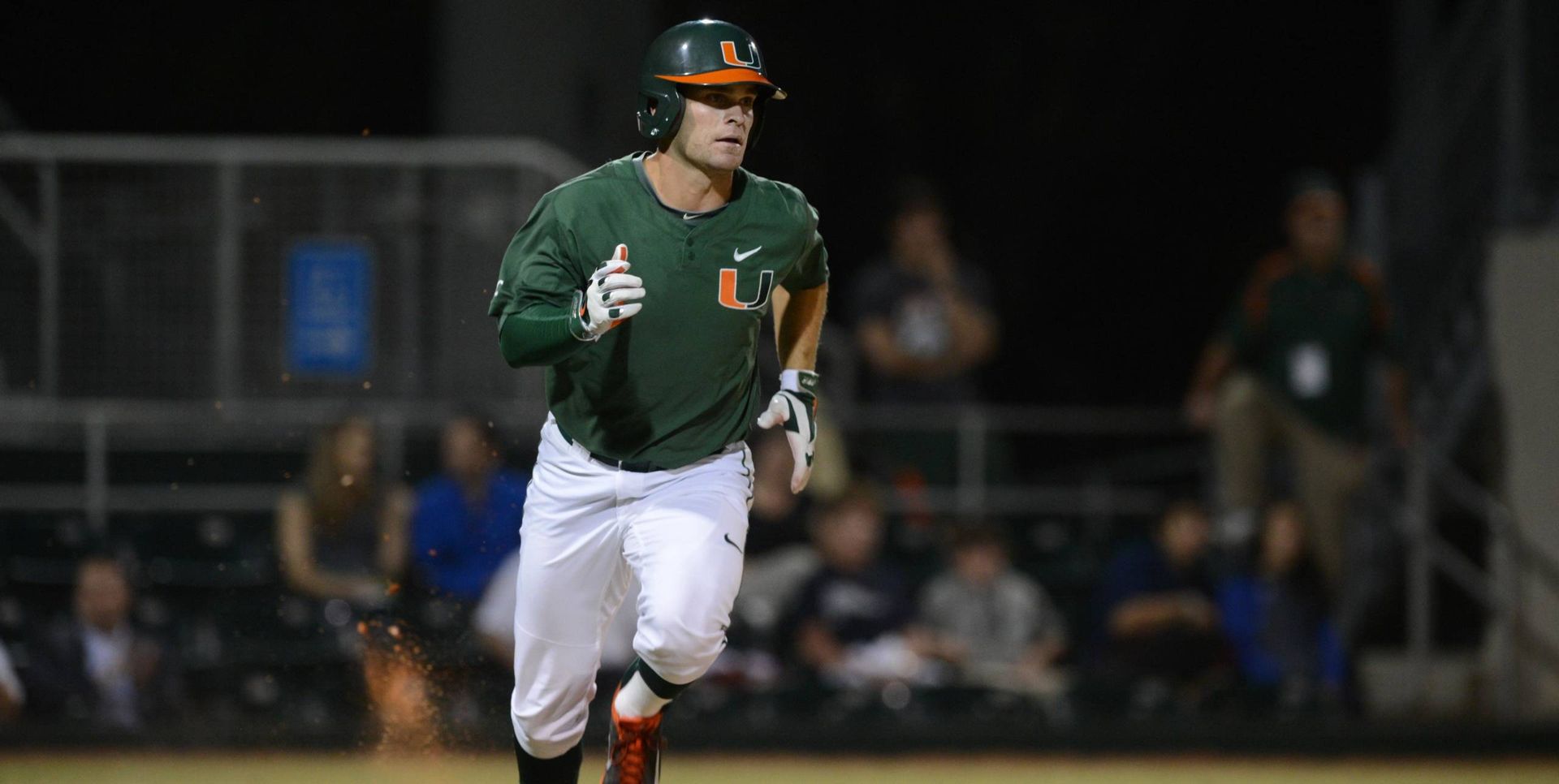 Despite out-hitting the Fighting Irish 14-10, Miami stranded 12 batters on the night and failed to generate any early offense against Notre Dame starter Michael Hearne. The Hurricanes battled back from a 7-1 deficit to cut the lead to 7-4 in the seventh, but were shut down by Irish reliever Donnie Hissa in the ninth.

The loss marked Miami’s first since March 24 – a stretch of 14 straight games, which matched the Hurricanes’ longest winning streak since 2008.

“Throughout this whole streak, we’ve been hitting with men on base,” senior Tyler Palmer said. “That’s how we’ve won 14 games in a row. Today we left too many runners on.”

“The streak was nice, but the things we did during the streak we didn’t do tonight – number one was hitting with guys on base,” head coach Jim Morris said. “We had a lot of opportunities to score runs and we left guys on base. To Notre Dame’s credit, they gave us nothing…they made us earn everything that we got.”

Notre Dame struck first against Miami lefthander Andrew Suarez (4-2), who was sharp until the fifth when the Fighting Irish chased the redshirt sophomore after plating five runs.

An RBI single from Phil Mosey gave the Irish a 1-0 lead in the top of the second, but Suarez retired the next nine batters he faced over three innings to hold the Hurricanes deficit to just one run.

“We can’t always go out there and rely on our pitching to let up one run or no runs,” Collins said. “Even though Andy didn’t have his stuff tonight, he still battled all the way until the end…we just left too many runners on base, that’s the bottom line.”

Miami (27-13, 15-5 ACC) looked like it might tie the game in the bottom of the fourth, when back-to-back singles from Collins and senior Brad Fieger – along with a sacrifice bunt from sophomore Brandon Lopez – put two runners in scoring position. Hearne kept Miami off the board, however, as Mosey fired home from third base to get Collins on a groundout and Edgar Michelangeli grounded into a fielder’s choice to end the threat.

Hearne (3-4) surrendered seven hits but managed to hold the Hurricanes scoreless through his five innings of work. The lefthander struck out two batters and walked none, giving way to Irish reliever Nick McCarty in the sixth inning.

Notre Dame (16-22, 4-16 ACC) exploded for five runs in the fifth, led by RBI singles from Biggio, Ryan Bull and Blaise Lezynski, along with a two-RBI double from pinch hitter Phil DeFilippis. After picking off Biggio to end the rally, Suarez was relieved by sophomore Enrique Sosa after just 5.0 innings.

Miami got one back in the sixth on an RBI fielder’s choice from Michelangeli – making the start at third base in place of freshman Johnny Ruiz, who injured his shoulder during Friday’s game. After allowing a single to freshman Sebastian Diaz to prolong the rally, Notre Dame reliever Nick McCarty struck out Dale Carey for the final out of the inning.

A sacrifice fly from Notre Dame pinch hitter Conor Biggio made it 7-1 in favor of the visitors, but the Hurricanes rallied for three runs in the bottom of the seventh to cut the deficit to 7-4.

A leadoff walk from Palmer and a single from Collins put runners on the corners with just one out. Reliever Matt Ternowchek entered in place of McCarty and promptly allowed an RBI double to Fieger, cutting the lead to 7-2. An RBI groundout from Brandon Lopez made it 7-3, which prompted another pitching change – this time for righthander Scott Kerrigan.

Lefthanded pinch hitter Brad Zunica capitalized on his opportunity, however, driving an opposite field double into the leftfield corner that scored Fieger from third to make it 7-4.

That was as close as the Hurricanes would get, however, as Hissa entered for the final inning and retired three straight batters after allowing a single to Collins.

The loss set up a rubber match to be played Monday night on ESPNU as part of the channel’s “ACC Mondays” series. First pitch is set for 7 p.m.

“We didn’t do what we’ve been doing during our streak…they outplayed us tonight,” Morris said. “We have to be ready to play tomorrow. The streak was good – now we have to try and start another one.”