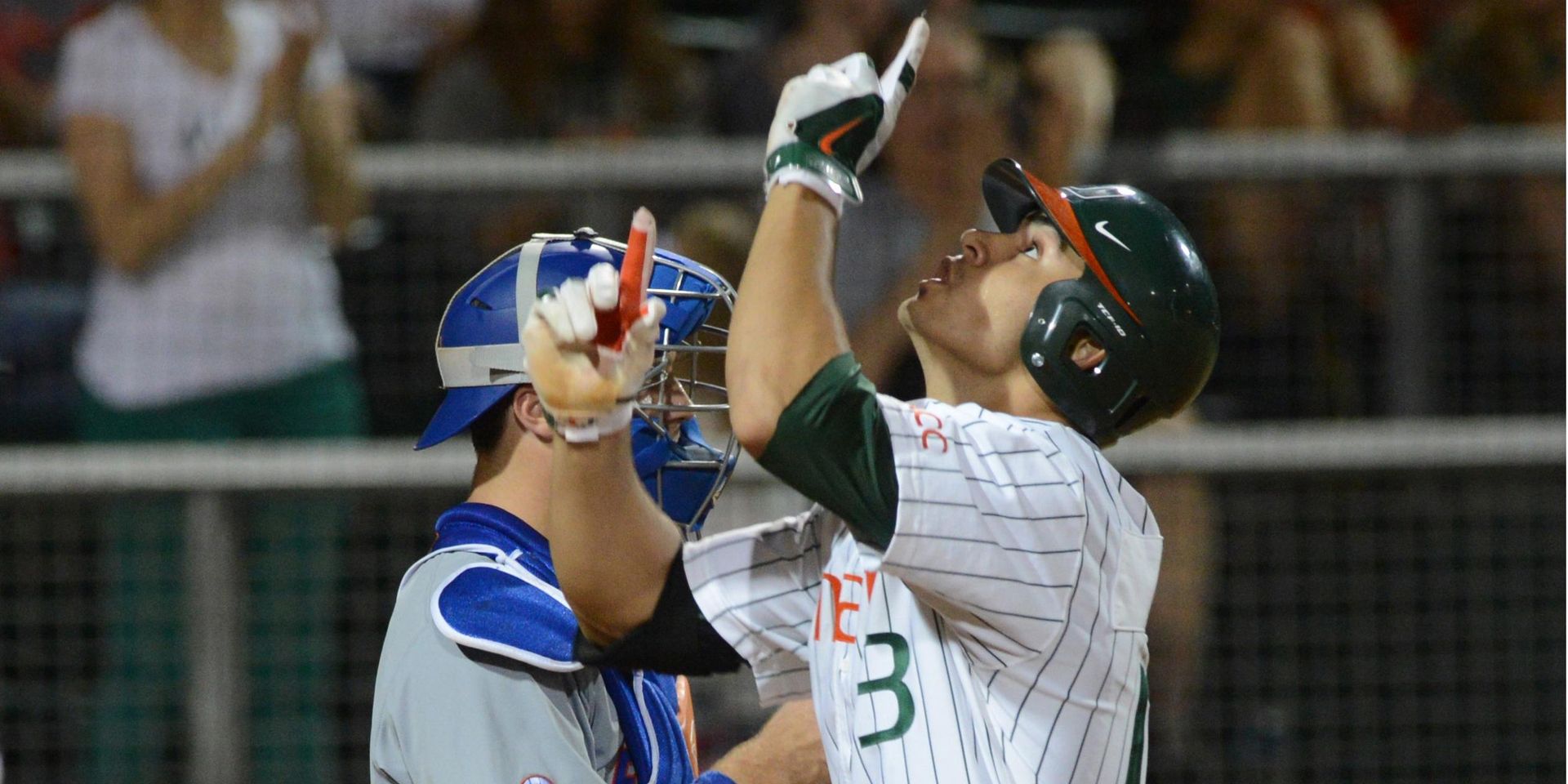 With runners on second and third and already two outs in the inning, Abreu connected on a grounder to Panthers shortstop Dylan Wolsonovich that forced the defender to his backhand. Abreu, hustling his way down the first base line, slid in with an outstretched hand to beat Wolsonovich’s throw, scoring John Lawroski from third and sending his teammates – along with the crowd of 3,117 – into a frenzied celebration.

“It’s something you dream about but never think it’s going to happen until you’re in the moment,” Abreu said of his walk-off hit. “I had a chance [earlier in the game] to score a winning run and I wasn’t able to. But luckily in the next inning I was able to do it.”

“It’s one of those wild games, I’ll say that – it was a great game,” head coach Jim Morris said. “I was jumping up and down at the end because it was so exciting.”

The Hurricanes might never have had the opportunity to walk off if it wasn’t for another stellar performance from one of their starting pitchers. Redshirt sophomore Andrew Suarez threw nine shutout innings and surrendered just three hits, the first of which didn’t come until the seventh.

Suarez, who earned a standing ovation after losing his no-hit bid on a one-out double from Casey Roche, attributed pitch location as the key to his successful night.

“They have a lot of righties, so [pitching coach] J.D. [Arteaga] told me before the game to make sure my changeup was good, and it was on,” Suarez said. “I had them off balance with that, and my fastball [helped].”

Suarez worked his way through the lineup with ease, but unfortunately for Miami, Panthers righthander Joseph Harvey was up to the task. The redshirt junior surrendered just five hits and one walk in his 6.0 innings of work, and did not allow more than one hit in any inning.

93 pitches deep into the outing with the game in a scoreless deadlock, Suarez was pulled after the ninth inning in favor of freshman righthander Cooper Hammond (5-0).

“I wanted to go out for the tenth, but J.D. told me that I had a lot of pitches, and I was fine with it,” Suarez said. “I knew the bullpen would throw well.”

Miami’s other freshman slugger, Zack Collins, nearly ended the game leading off the bottom of the ninth. Collins lifted a pitch from Pittsburgh reliever Hobie Harris (3-4) deep into the outfield, but Roche hauled it in on the warning track in rightfield.

Suarez, who had entered Saturday’s matchup with the Panthers on a personal streak of five straight quality starts, continued his impressive campaign with one of the best pitching performances of his career. He guided Miami to its eighth straight ACC victory, tied for the third-longest stretch in program history, with a career high-tying nine innings.

A one-out double from freshman Johnny Ruiz got action started in the tenth, and an intentional walk to Dale Carey put two runners on base. Lawroski entered the game as a pinch runner for Ruiz, and a groundout from senior Tyler Palmer advanced both runners into scoring position to set up the chance for Abreu’s theatrics.

The Hialeah, Fla., native entered the at bat 0-for-4, but came through when his team needed it most.

“It’s crazy, you go through days when you’re not seeing the ball well and you’re not doing as well as you think you should,” Abreu said. “It was great I was able to get the bat on the ball, not strike out, and I let my speed take care of the rest.”

No. 20 Miami returns to Alex Rodriguez Park at Mark Light Field for its series finale against the Panthers on Sunday, April 13. First pitch is set for 12 p.m.