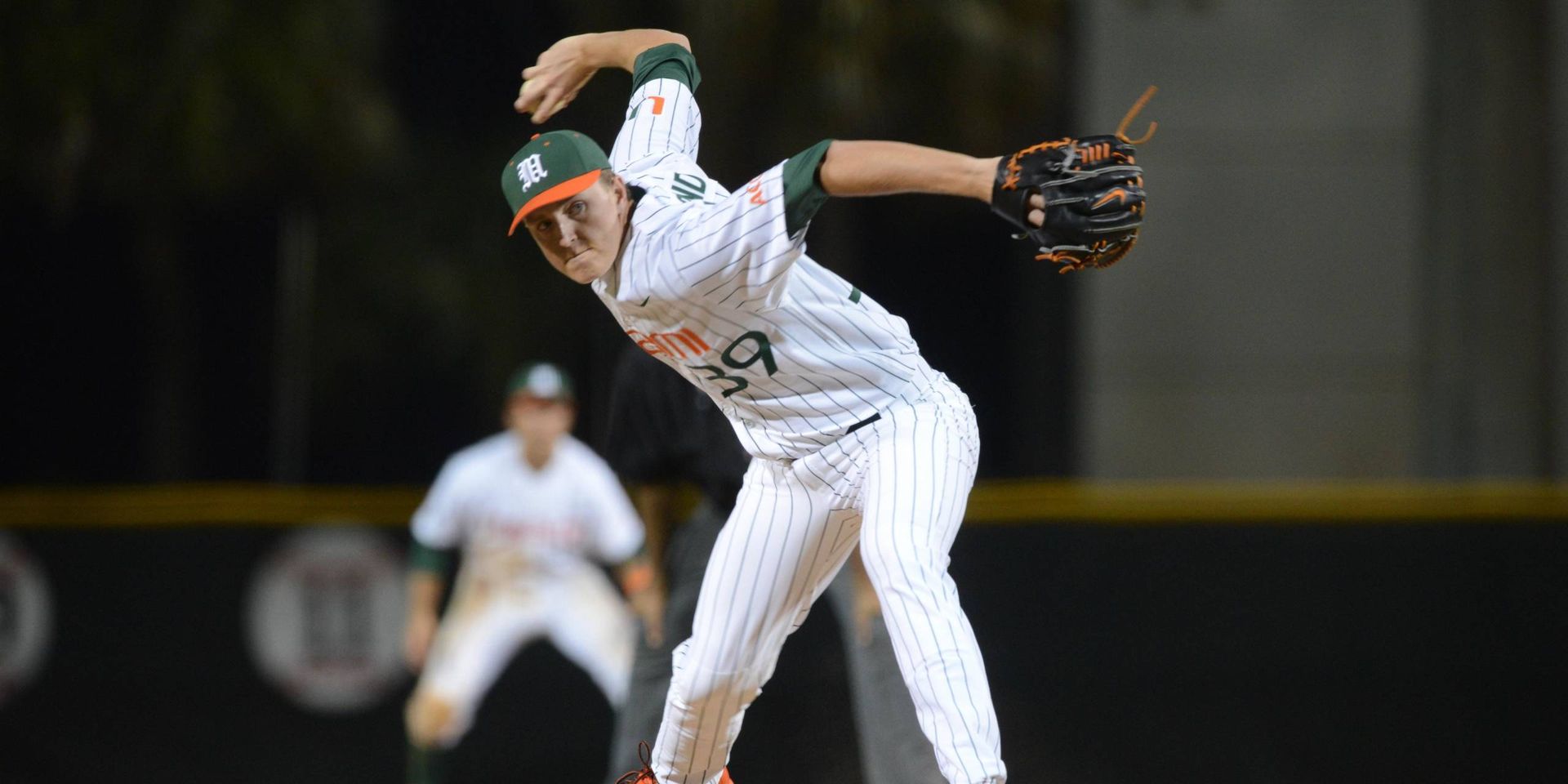 Baseball Clinches Series Over No. 25 Wolfpack

RALEIGH, N.C. — In a game delayed a full day due to inclement weather, Miami picked up a 2-1 win over No. 25 NC State in its series opener against the Wolfpack at Doak Field.

With the game tied up 1-1 Friday night, an 80-minute rain delay eventually turned into a postponing of play. After picking up a win in game two of its series earlier Saturday afternoon, the Hurricanes (16-12, 7-4 ACC) capped an impressive day at the ballpark by finishing off the Wolfpack over final three innings of game one.

Play resumed with one out in the bottom of the sixth, and sophomore lefthander Thomas Woodrey (1-0) picked up right where Chris Diaz left off. Woodrey threw 2.2 scoreless innings en route to his first win of the season, while freshman Cooper Hammond tossed a scoreless ninth for his career-first save.

Miami wasted little time in opening the scoring Friday night, tagging NC State ace Carlos Rodon for a run in the game’s first inning. Senior Tyler Palmer got the action started with a one-out walk, and took second base on a single ripped through the right side by freshman Willie Abreu.

After a successful double steal put both runners in scoring position, senior Brad Fieger drove in his team-high 17th run with a groundout to second to plate the speedy Palmer, as Miami took an early 1-0 lead over the Pack (15-10, 3-8 ACC).

Diaz delivered another dominant outing for the Hurricanes, allowing just one unearned run in 5.1 innings of work. With rain pouring down at Doak Field, the Wolfpack strung together a two-out rally in the bottom of the fifth – its first threat of the night – to plate the tying run. Diaz walked Matt Vernon and hit Jake Armstrong with a pitch to put two runners on base. Though he induced a weak grounder from Cavanaugh, the throw from freshman Johnny Ruiz at third sailed past the glove of a diving Fieger, plating Vernon to make it 1-1.

Miami caught Armstrong in a pickle after a nice throw from Abreu in right, and the score remained 1-1.

Just 71 pitches deep into his outing, Diaz and Rodon were both forced to retire due to the rain delay.

The Hurricanes were able to plate the deciding run off NC State reliever Eric Peterson when play resumed Saturday afternoon. Back-to-back singles from Abreu and Fieger gave Miami runners on the corners, and freshman Zack Collins delivered a sacrifice fly to send Miami to a 2-1 advantage in the eighth.

Hammond pitched a flawless ninth for his career-first save.

The Hurricanes return to the diamond Sunday for the series finale against No. 25 NC State. First pitch for the game, slated for broadcast on ESPN3, is set for 1 p.m.