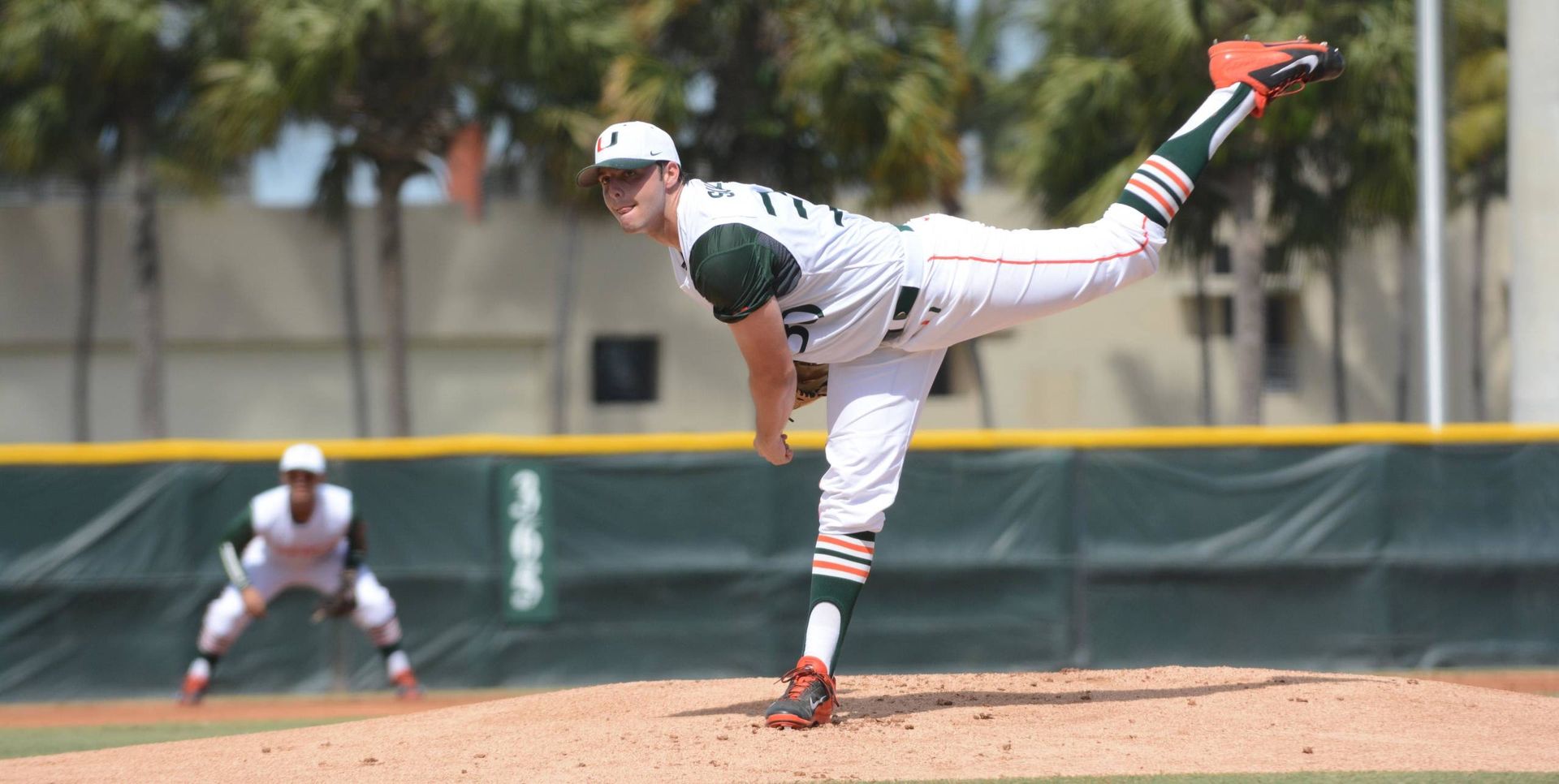 RALEIGH, N.C. — Redshirt sophomore Andrew Suarez lost his no-hit bid with two outs in the sixth inning, but managed to guide Miami to a 2-1 victory over No. 25 NC State Saturday afternoon.

After Friday’s series opener was suspended due to rain, the Hurricanes and Wolfpack opened game two after a 90-minute rain delay. On another damp day at Doak Field, it was Suarez who brought the heat with an eight-inning, 105-pitch performance.

Suarez said the key to his success against the Wolfpack was more of the same. He threw a combination of one-seam fastballs and change-ups up through the fifth, when he started to rely on his offspeed repertoire.

“It was pretty much what I’ve been doing this whole year – keeping the ball low, throwing strikes, and letting my defense do the work,” he said.

Freshman closer Bryan Garcia allowed a leadoff double to open the ninth, but shut the door for his seventh save of the season.

Head coach Jim Morris was impressed by the performance of his team, who has battled the elements throughout its weekend in Raleigh.

“It was a great outing by Suarez,” Morris said. “It was tough conditions again. If you have a ground ball hit to you – and the ball was shooting through, it was slick out there – and you caught it, the ball is soaken wet and you’re throwing to first base. It wasn’t easy for the infielders on either team with those conditions.”

Suarez did not allow a hit until a bloop single from Wolfpack catcher Brett Austin in the bottom of the sixth. The Miami, Fla., native, who entered the game having allowed just three earned runs over his last three starts combined, scattered three strikeouts and just five hits on the afternoon.

NC State senior righthander Andrew Woeck (3-1) delivered an efficient outing for the Wolfpack in his career-first start, but some timely hitting gave the Hurricanes (15-12, 6-4 ACC) their fifth victory over a ranked team this season.

Senior Dale Carey put the visitors on the board with his fifth home run of the season. The Marietta, Ga., native ripped a 1-0 pitch from Woeck over the fence in left to give Miami a 1-0 advantage in the top half of the third.

The home run was Miami’s 15th as a team this spring, which already surpasses the Hurricanes’ 2013 team total of 14.

Carey’s double to lead off the sixth set up Miami’s second run of the afternoon. A one-out RBI single from freshman Willie Abreu roped up the middle off Woeck signaled the end of the righthander’s day, and gave the Hurricanes a 2-0 lead in the middle innings.

The double was Carey’s team-leading eighth of the season, while Abreu reached base for the sixth straight game. Both players recorded their ninth multi-hit games in the victory.

“Willie had a couple of great at bats,” Morris said. “The one of course where he knocked in a run, but his last at bat was really good too. He fouled off four or five 0-2 pitches and finally hit a line drive to leftfield. Our freshmen are getting better. These young guys have to come through.”

NC State cut the deficit to 2-1 on Austin’s first home run of the season in the bottom of the eighth. But after allowing a bloop single to NC State shortstop Trea Turner, Suarez (3-1) retired Jake Fincher on a groundout to first to end the inning.

“In the offseason, [pitching coach] J.D. [Arteaga] and I talked about all the fly ballsI gave up last year,” Suarez said. “We worked on a few pitches – a slider, a one-seam – and we focused on location. That was the key today.”

Garcia entered in the ninth and promptly allowed a double to Wolfpack second baseman Logan Ratledge to open his stint. After a sacrifice bunt from Andrew Knizner moved Ratledge to third, Garcia retired pinch hitter Carlos Rodon on a groundout and got Bubby Riley to fly out to left field to secure the victory.

“We ought to be able to compete,” Morris said. “If our pitchers keeps us in the game – which they’ve been doing – and we’re playing solid defense, I feel good about our lineup. You have to play the whole game to get a win like this.”