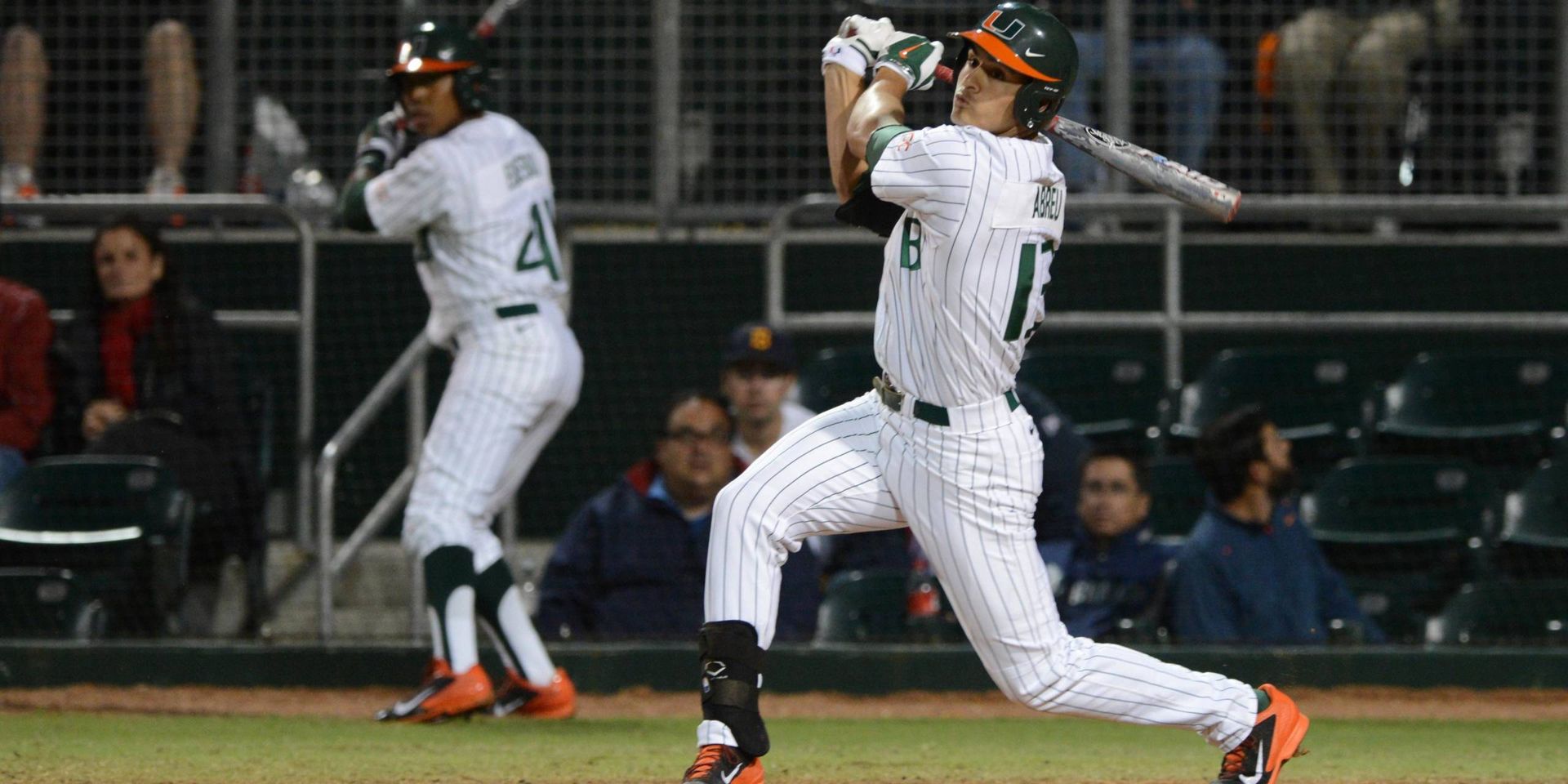 With speedy outfielders Dale Carey and Tyler Palmer on base, Abreu laced a pitch from Brady Anderson (1-1) that split the Eagles middle infield and scored Carey from second. Senior Brad Fieger would add to the onslaught, ripping a ball that FGCU third baseman Ryan O’Malley couldn’t handle to score Palmer.

Miami (12-10) fell behind 1-0 on an RBI double from FGCU catcher Andrew Valencia in the bottom of the second, but took its first lead of the game on a two-out hit from senior captain Tyler Palmer a half-inning later.

Back-to-back walks issued to freshman Johnny Ruiz and sophomore Brandon Lopez by FGCU starter Zack Tillery set up the scoring opportunity for the Hurricanes. After Dale Carey advanced both runners with a groundout, Palmer laced a Tillery offering over the glove of a jumping Alex Diaz at shortstop to plate both runners.

The Hurricanes received an efficient outing from freshman righthander Derik Beauprez, who was making just his second collegiate appearance and career-first start. Beauprez threw 3.0 innings, yielding just one run on the RBI double from Valencia in the second. The Cherry Hills Village, Colo., native allowed four hits and struck out one batter in his stint.

Beauprez gave way to Thomas Woodrey, who was masterful in 3.1 innings of relief. Woodrey struck out three batters and allowed just one hit in the performance – his team-leading 11th outing from the bullpen this season. But after hitting FGCU third baseman Tyler Selesky with a pitch, Woodrey was pulled in favor of freshman righthander Cooper Hammond.

Woodrey was charged with the game-tying run in the seventh, after an RBI single from Valencia off Hammond plated speedy pinch runner Adam Eggnatz.

Garcia pitched a scoreless eighth, stranding FGCU’s Gage Morey at third base with a swingingstrikeout of Kevin Young.

Miami nearly regained a lead in the ninth after Zack Collins cracked a one-out double to the gap in left-center, but pinch runner Johnny Lawroski was stranded at third when Brad Zunica struck out looking to end the inning.

Garcia ran into trouble in his second inning of work, allowing a single and a walk to put two runners on base with two outs in the ninth. But Garcia fanned Diaz swinging, forcing extra innings and maintaining the 2-2 deadlock.

After Miami captured a 5-2 lead, Garcia returned for tenth. The Miami, Fla., native struck out Nick Rivera for the second out of the inning, while Morey was thrown at second base by Kennedy on the play – ending the the contest on an impressively turned double play.

The Hurricanes open their series with No. 3 Virginia Saturday at Alex Rodriguez Park at Mark Light Field. First pitch for game one, slated to be broadcast on ESPN3, is set for 7 p.m.