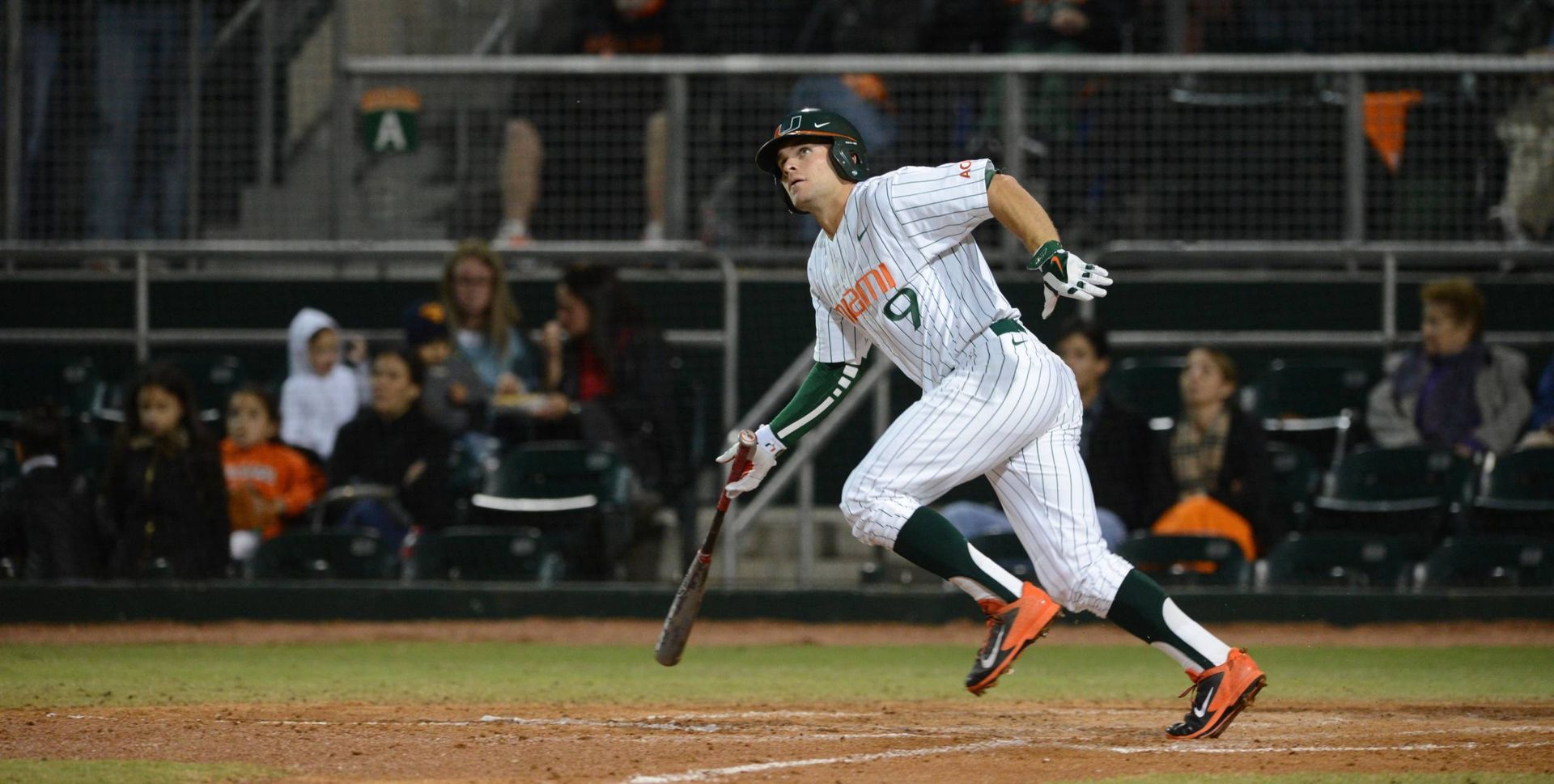 ATLANTA, Ga — In a thrilling back-and-forth affair at Russ Chandler Stadium, No. 13 Miami captured game one of its series with host Georgia Tech by a final score of 10-8.

With the score tied up at 7-7 in the eighth, senior Dale Carey belted a solo home run to give the Hurricanes (11-7, 4-0 ACC) their third lead of the game in the top half of the inning. After freshman reliever Bryan Garcia (1-0) allowed a run in the bottom of the eighth to tie the game, Miami came through for good in the ninth.

Senior captain Tyler Palmer knocked in two runs with a bases-loaded single, setting a new career high with four on the night, to power the visitors to a win.

Aided by two Georgia Tech errors in the second inning, Miami jumped out to an early 5-0 lead off Yellow Jackets starter Zac Ryan. Back-to-back walks to senior Alex Hernandez and sophomore David Thompson opened the inning, while a single from sophomore Brandon Lopez to right field loaded the bases with no outs.

After junior Garrett Kennedy struck out for the first out of the inning, sophomore Edgar Michelangeli laced the first pitch he saw from Ryan for an opposite-field single, scoring Hernandez. Senior Dale Carey, who extended his hitting streak to seven consecutive games earlier in the contest, made it 2-0 on a fielder’s choice mishandled by Tech shortstop Connor Justus.

Lopez would score the third run of the inning on a passed ball charged to catcher Arden Pabst. Yellow Jackets third baseman Elliot Barzilli fielded a chopper and fired home to get Michelangeli on a close play for the second out of the inning, helping Ryan nearly escape the jam down just 3-0.

But an error charged to Ryan on a pick-off attempt of Tyler Palmer scored Carey, and an RBI single from freshman Willie Abreu off Justus’ glove plated Palmer to make it 5-0.

Georgia Tech struck for three runs in the bottom of the fourth off Hurricanes lefthander Chris Diaz to tighten the game in front of 1,309 fans.

RBI singles from Daniel Spignola and Pabst, as well as a sacrifice fly from second baseman Mott Hyde, helped the hosts climb back into the contest and trim the Hurricanes lead to 5-3. A solo home run from Matt Gonzalez to lead off the next inning, the first allowed by a Miami weekend starter all season, cut the lead to just one run at 5-4.

The Yellow Jackets would come all the way back to tie the game on a single from A.J. Murray in the bottom of the fifth. With Thomas Smith on second base, Murray laced a Diaz offering towards Abreu in rightfield. The freshman could not corral the ball cleanly, however, scoring Smith on the play to tie the game 5-5.

Diaz, who struggled with command in the outing, was pulled in favor of freshman righthander Cooper Hammond after 4.2 innings. Hammond got the final out of the fifth by striking out Ryan Peurifoy.

The Hurricanes would respond, however, as a two-run homerun from Palmer crushed off Tech reliever Josh Heddinger saw the vistors regain a 7-5 advantage. With Carey on first after a walk, Palmer belted an 0-2 pitch from Heddinger off the indoor football facility behind the leftfield wall. It was Palmer’s second home run of the year.

Hammond worked himself into a jam in the bottom half of the frame, hitting Hyde with a pitch and allowing a single to Justus, but escaped with an impressive display of composure. The Venice, Fla., native intentionally walked Gonzalez to force an out at any base, and then promptly struck out Barzilli and Murray for the final two outs of the inning, celebrating with a fist pump on the mound.

But the Jackets wouldn’t go away, tying the game in the seventh on a two-RBI double from Hyde off senior reliever Adam Sargent into the right-center gap.

Carey would deliver the late theatrics, taking Georgia Tech reliever Jonathan Roberts deep on just the second pitch of his outing. After trading runs in the eighth, Miami pulled ahead in the top of the ninth on Palmer’s two-out, opposite-field single.

Due to the potential for inclement weather Sunday, the Hurricanes return to Russ Chandler Stadium Saturday for a doubleheader. First pitch for game one is slated for 3 p.m., while game two, scheduled for broadcast on CSS and ESPN3, is set for 7:30 p.m.