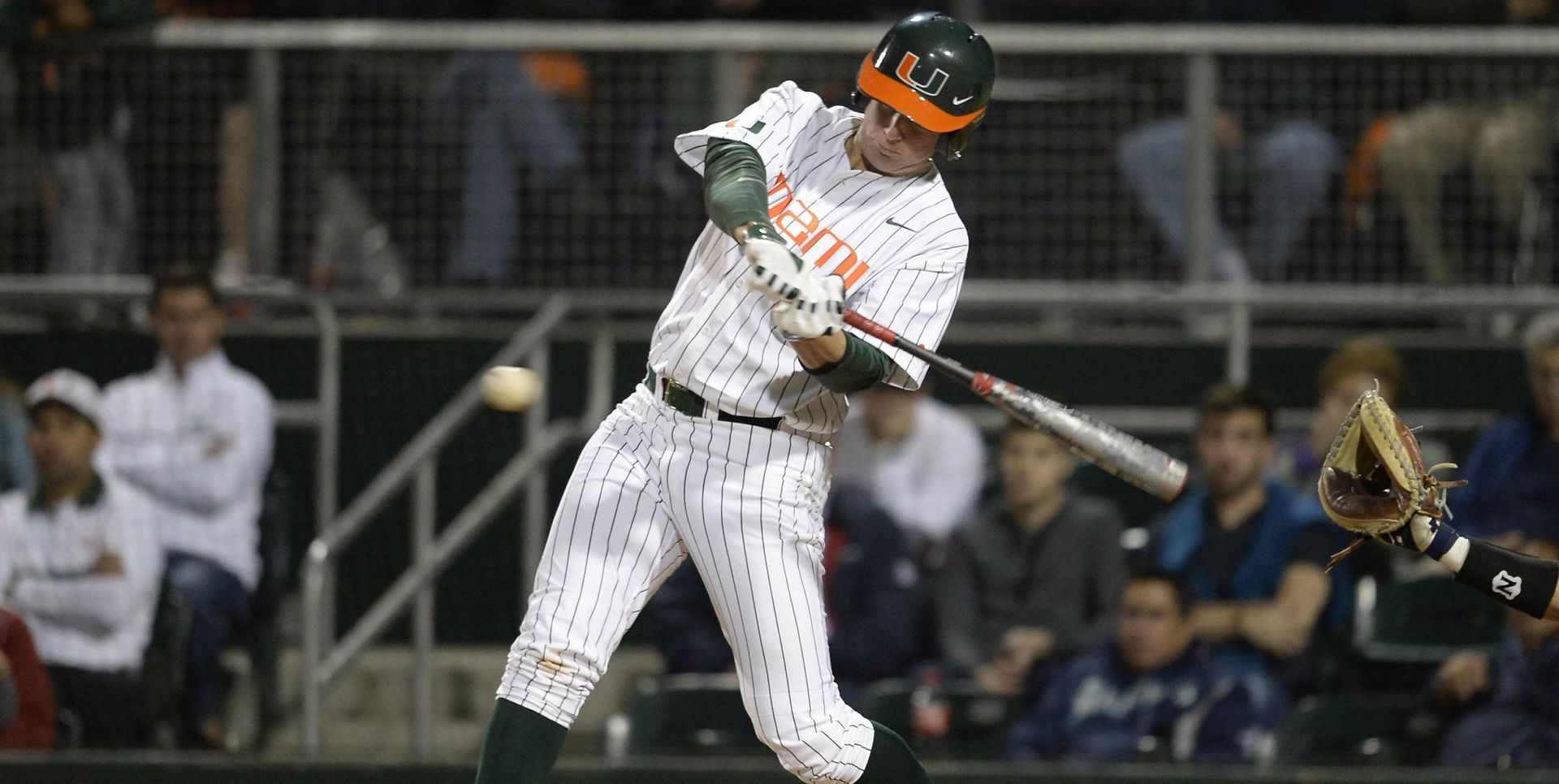 No. 11 Baseball Clinches Series with 5-2 Win

CORAL GABLES, Fla. – Miami got two more home runs from its hot-swinging bats, redshirt junior lefthander Bryan Radziewski delivered an efficient performance, and the No. 11 Hurricanes captured their series against No. 16 Florida with a 5-2 win in game two Saturday night.

Junior catcher Garrett Kennedy and freshman Zack Collins both connected on no-doubters, as a packed house of 4,076 watched Miami power its way to its first series victory over Florida since 2009. Collins became the first Hurricane since Yonder Alonso (2006) to record a home run for his first collegiate hit, while Kennedy’s homer was his second in as many nights against rival Florida.

“I thought it was pretty good team effort, it was a big win,” head coach Jim Morris said. “We had a lot of guys do some good things. Our pitching was very good – Radziewski pitched good, but our whole bullpen did a good job.”

With two more homers Saturday, Miami has six home runs in its first six games of the season.

“Our hard work in the weight room with our new strength coach is really paying off for us,” Kennedy said. “We’re not trying to hit it out, we’re just putting good swings on it and the ball is carrying.”

Unlike Friday night’s come-from-behind victory, it was the Hurricanes who struck first against Gators righthander Brett Morales. A nine-pitch at bat from Johnny Ruiz to lead off the third got the action started, and the freshman infielder was rewarded with a well-earned base on balls. After taking second on a passed ball charged to Gators catcher Taylor Gushue, Ruiz scored on the second hit of the night from senior outfielder Tyler Palmer – a single through the left side.

Palmer also connected on his third double of the season in the game’s first inning, but was stranded at third by Morales.

Pitching with a 1-0 lead, Radziewski worked himself into a jam to open the fourth when the first two Gators reached via bunt singles. But Radziewski got Gushue swinging for the first out, forced a groundout to third from designated hitter Peter Alonso, and caught Richie Martin at third for his second pick-off of the game to end the threat.

A solo home run from Kennedy pulled over the fence in right off Morales made it 2-0 in favor of the hosts in the bottom of the fourth. The home run was the second of the series for Kennedy, who ranked second on the team in homers in 2013.

“I felt comfortable,” Kennedy said. “He came in with a first pitch on the inside corner for a strike, so I told myself he was going to come in again with that and I wasn’t going to miss it.”

Florida would respond, however, getting runs in the fifth and sixth to chase Radziewski after 5.2 innings. Freshman Cooper Hammond (1-0) did well in relief, getting pinch hitter Zack Powers to line out to left field with the bases loaded to end a potential big inning for the visitors. Hammond allowed just one walk in his one inning of work, earning his first collegiate victory in the process.

Collins delivered the play of the game in the bottom of the same frame, sending the first pitch he saw from Gators reliever Danny Young over the rightfield fence for a three-run home run. With sophomore David Thompson on second after a double and freshman Willie Abreu at first after a walk, the Gators coaching staff brought in the lefthander to face Collins with the game tied up 2-2.

“I was pretty confident in myself that I was going to come through right there,” Collins said. “To be honest, all I was thinking was ‘don’t hit into a double play.'”

Instead, Collins sent the first pitch he saw from Young over the fence on a line drive.

“I was pumped,” he said afterwards. “To go up three runs against Florida? That’s awesome. That’s the thing I needed right there.”

Relievers AJ Salcines and Bryan Garcia combined to shut out the Gators over the final two innings, with Garcia picking up a save in back-to-back nights. After throwing 35 pitches in Friday’s save and another 24 Saturday, Garcia earned himself a scratch from Coach Morris for Sunday’s finale.

“Towards the end, I was starting to get a little more fatigued, but I wanted to stay in there and finish it off,” Garcia said.

Morris said afterwards that if he were asked to name a closer, Garcia would be his choice.

“It means a lot, actually, because I didn’t really think I would have that role to start,” Garcia said. “It shows that my hard work paid off.”

Miami returns to Mark Light Field looking for a series sweep of No. 16 Florida Sunday afternoon. First pitch for the finale is set for 1 p.m.