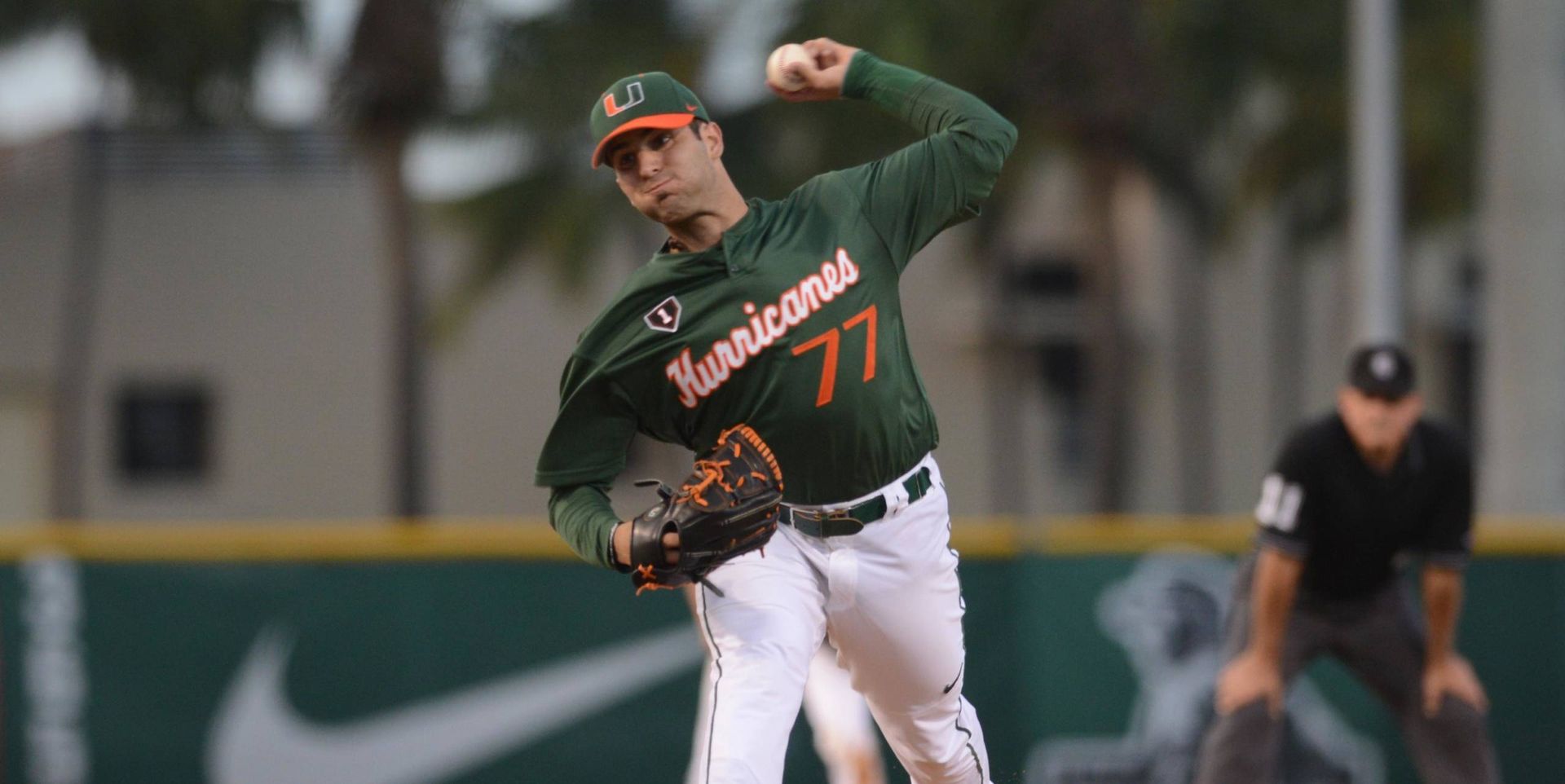 CORAL GABLES, Fla. – Miami’s offense struggled to carry any momentum into Saturday game two matchup with Maine, as the visiting Black Bears evened the series with a 3-1 victory at Alex Rodriguez Park at Mark Light Field.

The No. 13 Hurricanes exploded for five runs in the first two innings of Friday’s season opener, but managed just two hits and one run off Maine starter Scott Heath (1-0) in a disappointing offensive performance. The loss set up a rubber match to be played Sunday at noon.

Junior lefthander Bryan Radziewski picked up a loss in his season debut.

“We have to swing the bat better,” head coach Jim Morris said. “We can’t expect Radziewski or any of those guys shut them out and we only score one run. We have to score some runs.”

The night started well for Radziewski (0-1), who punched out the first five Maine batters on the night before allowing an infield single to Steven Adam in the top half of the second.

The southpaw fanned seven of the first 10 batters he faced, recording his sixth career double-digit strikeout game despite lasting through just 86 pitches and five innings of work.

Radziewski credited a good mix of fastballs and sliders, as well as a heavily left-handed Maine lineup, to his efficient outing.

Despite the strong start from Miami’s ace lefthander, it was the visitors who struck first. Maine took a 2-0 lead in a sloppy third inning for the Hurricanes, when two errors charged to Radziewski and another charged to sophomore third baseman David Thompson resulted in two unearned runs.

Maine catcher Jonathan Salcedo was hit by a pitch from Radziewski to open the frame.

“I pretty much look at third inning,” Radziewski said. “You get a guy down 0-2, and you hit him, nothing good can come from that. They ended up scoring two runs, and that’s what hurt us.”

Radziewski, who registered four double digit-strikeout games in 2013, did well to avoid further damage by striking out rightfielder Brian Doran to end the frame.

The Hurricanes responded with a run of their own in the bottom half of the inning, as a successful double steal plated freshman Laz Rivera from third. The Miami, Fla., native, who reached after getting plunked by Heath with two outs, took third on a perfectly executed hit-and-run in tandem with outfielder Dale Carey.

When Carey took off for second with senior Tyler Palmer at bat, Maine catcher Jonathan Salcedo tried to get the speedy senior advancing. Rivera took off for home and got there easily, as Miami cut the deficit in half.

But Heath buckled down to retire the next nine batters in a row over three-plus innings. A pinch-hit double from senior Brad Fieger in the bottom of the seventh showed a late sign of life, but Heath was helped by a nice play from his rightfielder on a flyout from senior Alex Hernandez.

“That would have given us a lot of momentum,” Carey said of the impressive catch. “The rightfielder made a good play on the ball. It was tough.”

Maine reliever Jacob Gosselin-Deschesnes kept Miami off the scoreboard for the final two frames, locking down the 3-1 victory with a six-out save.

Heath went seven innings for the Black Bears, striking out eight batters and walking just one.

“He worked low,” Carey said. “He did a god job of pitching today. We have to come out better and have better at bats. He did his job. Tomorrow is a new day, and we’re going to come out ready to play.”

The Hurricanes will battle the Black Bears at noon Sunday. Junior southpaw Andrew Suarez will get the start for Miami, while sophomore righthander Jake Marks will take the mound for the Black Bears.