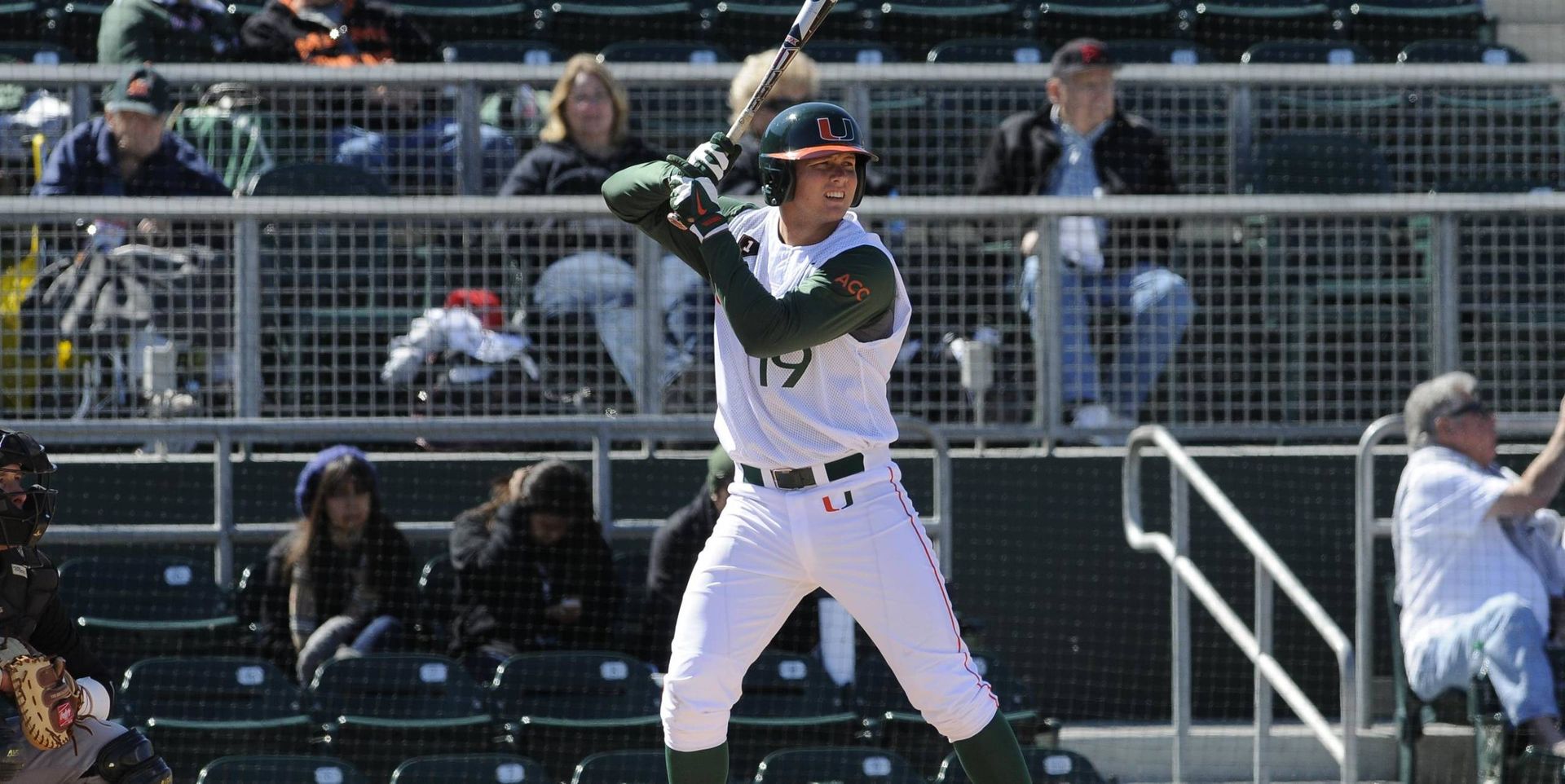 @CanesBaseball Blows Past GTech With 11-7 Win

CORAL GABLES, Fla. — Boosted by another impressive early surge from the team’s offense, the Miami Hurricanes clinched their series with visiting Georgia Tech Friday night, capturing game two of the weekend set by a final score of 11-7.

The recipe for the Hurricanes (35-20, 14-15 ACC) was much of the same as game one: hit early and hit often. A night after connecting for seven runs off ace Buck Farmer, the Hurricanes tagged Yellow Jackets’ starter Dusty Isaacs for eight runs in just 1.1 innings of work. Freshman David Thompson, who reached base for the 21st consecutive game, chased the junior righthander out of the game with a three-run homerun in the second inning.

“It was great to see the guys come out, erupt and get a lot of runs,” head coach Jim Morris said. “We haven’t had that big of a lead early in the game.”

Sporting a seven-run lead by the third, the Hurricanes never looked back, and, aided by another strong pitching performance from sophomore lefthander Chris Diaz, cruised to their eighth straight home victory.

Miami opened the game with four runs in the bottom of the first. Keyed by RBI singles from Thompson and freshman Roger Gonzalez in the frame, the Hurricanes added runs on a sacrifice fly from sophomore Garrett Kennedy and a two-base wild pitch charged to Isaacs that plated Thompson from second base.

The Hurricanes tacked on four more in the second inning, as the freshman’s three-run blast belted over the wall in left beckoned Tech skipper Danny Hall from the dugout to end Isaacs’ night after just four outs. The homerun was the team-leading sixth of the season for Thompson, who registered a career-high five RBI by night’s end.

Junior Alex Hernandez extend his personal hitting streak to eight consecutive games earlier in the frame, driving in junior Tyler Palmer with an RBI single off Isaacs to make it 5-0 in favor of the Hurricanes.

The hosts looked poised to strike for more off the new Jackets’ pitcher Joe Wiseman, as a single from junior Brad Fieger and a double from sophomore gave the Hurricanes runners on second and third with just one out. The righthander did well to limit the damage, however, inducing a groundout from Gonzalez and a strikeout of freshman Brandon Lopez to end the threat.

Facing one of the most potent lineups in the Atlantic Coast Conference, Diaz did well to work his way around jams throughout the contest. The Florida City, Fla., native delivered his 12th quality start of the season in the victory, yielding just three earned runs on eight hits. Diaz allowed three extra-base hits on the night, including his first homerun allowed all season, but was able to strand Tech runners along the way to keep the Hurricanes on top.

Though Tech (32-23, 14-15 ACC) clawed its way back into the game with help from a solo homer from Daniel Palka and a sacrifice fly from Sam Dove, the Hurricanes blew the game open with three runs in the bottom of the sixth. Hernandez, who scored three runs in the contest, was plunked by a pitch from Tech reliever Sam Clay, and advanced to third on a single from senior Chantz Mack. With runners on the corners, Thompson drove a weak grounder to third base mishandled by Dove, plating Hernandez to make it 9-3 in favor of Miami.

An RBI groundout from Gonzalez, who registered his first career multi-RBI game, and a wild pitch from Clay helped the Hurricanes take an 11-3 advantage.

Though the visitors struck for four runs in the top of the ninth, senior closer Eric Nedeljkovic shut down the rally to preserve the victory. Entering with the bases loaded, the Folsom, Calif., native recorded his conference-leading 13th save of the season to help Miami clinch the series.

The Hurricanes will return to Alex Rodriguez Park Saturday for their series finale with the Yellow Jackets. First pitch for the match-up, set to be televised on CSS with ESPN3 simulcast, is slated for 1 p.m.