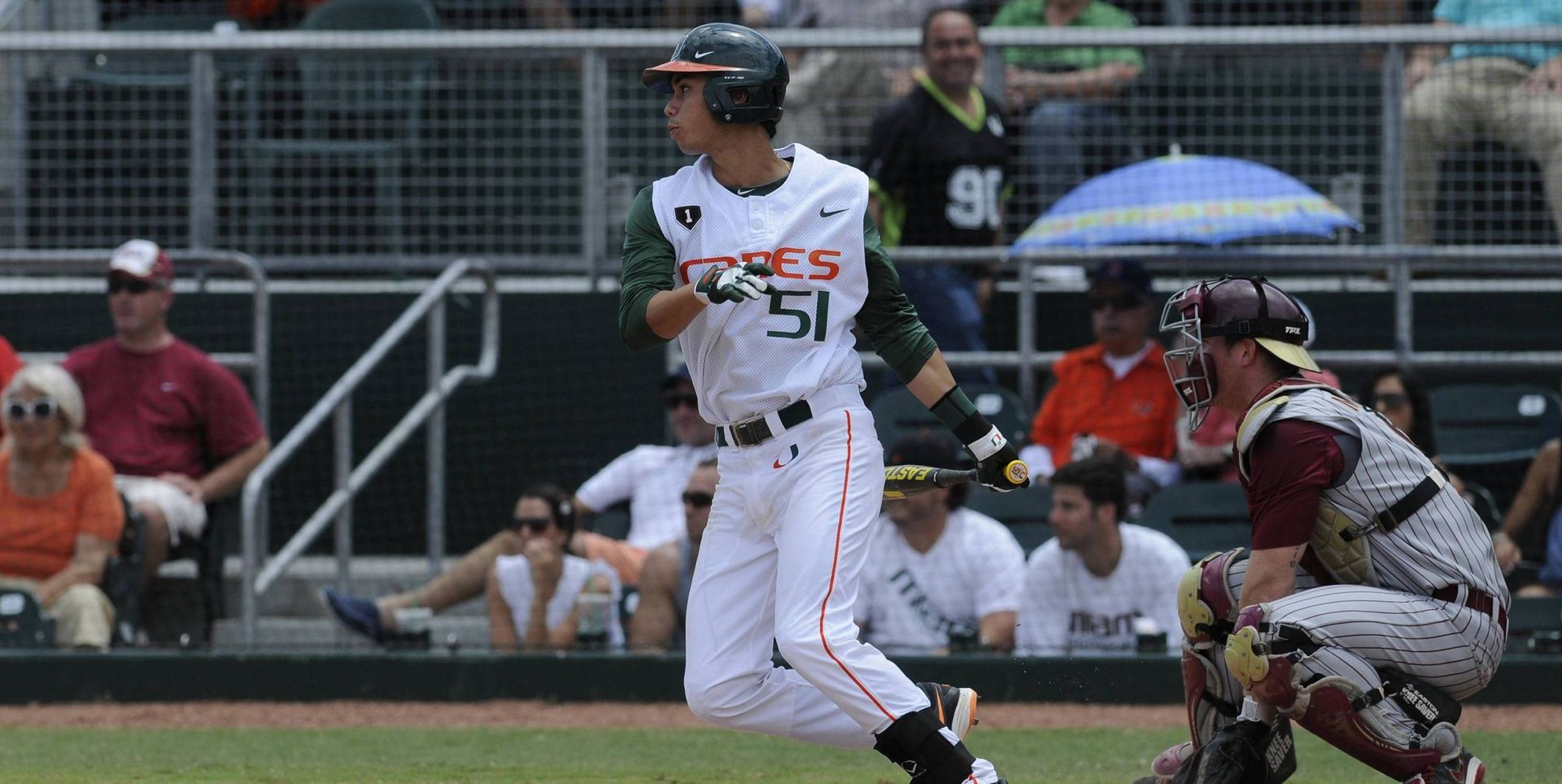 WINSTON-SALEM, N.C. — The Miami Hurricanes used an eighth-inning rally to overcome an early three-run deficit, but Wake Forest walked off on an RBI single from Matt Conway in the bottom of the ninth to capture game two by a final score of 5-4.

Despite a career day from freshman shortstop Brandon Lopez, who drove in all four of Miami’s runs in the game, the Hurricanes fell on the late rally from the Demon Deacons. The Miramar, Fla., native, who set a new career high with four RBI’s and tied a career high with three hits, gave the Hurricanes their first lead of the game with two outs on a two-RBI single in the eighth.

Though the Hurricanes (33-19, 12-14 ACC) jumped out to a commanding lead in game one, it was Wake Forest (27-24, 8-18 ACC) who struck early Saturday, tagging Hurricanes’ southpaw Bryan Radziewski for three runs in the bottom of the first. RBI singles from Jack Carey and Grant Shambley keyed the successful frame for the Demon Deacons, who tacked on their third run on a botched pick-off by the Miami infield.

The Hurricanes responded well, however, getting one back on an RBI groundout from Lopez in the top of the second. Back-to-back hits from Alex San Juan (single) and Garrett Kennedy (double) set up Miami’s scoring chance with runners on second and third base. Lopez, who recorded his first career homerun as a Hurricane Friday night, connected on a groundball to short deep enough to plate San Juan from third.

Another timely hit from Lopez in the fourth helped Miami cut deeper into the deficit. The first two baserunners of the frame reached, as freshman David Thompson was hit by an Austin Stadler offering and San Juan belted his second single of the game into the right-center gap. After rightfielder Joey Rodriguez’ throw airmailed its way into the infield, Mark Rhine’s throw to second was there in time to get an aggressive San Juan on the basepaths.

But after a four-pitch walk from Stadler to Kennedy gave Miami runners on the corners, Lopez connected on an opposite-field single that easily plated Thompson from his perch at third. The successful conversion from Lopez marked his fourth multi-RBI game this season.

With Radziewski cruising through the middle innings, Wake Forest pitching stymied rallies from Miami in the sixth and seventh.

The Hurricanes had a chance to plate the tying run after a one-out double from Thompson in the top of the sixth, but Stadler got a swinging strikeout of Kennedy to end the threat. Wake Forest reliever Jack Fischer managed to work his way out of another potential rally in the seventh. Lopez was once again the catalyst, reaching on a lead-off opposite field single. Carey successfully bunted Lopez over to second, but Fischer then entered in relief and induced a groundout from Palmer and a strikeout from Alex Hernandez to end the threat.

After a rocky first inning, Radziewski would settle down to record his third double-digit strikeout game of the season. The Miami, Fla., native fanned 10 Demon Deacons batters on the day, yielding six hits and four walks but working his way out of multiple jams throughout the contest.

Miami finally broke through in the top of the eighth, as walks from Fischer to senior Chantz Mack and Thompson, alongside a single from San Juan, loaded the bases with just one out. After Kennedy struck out swinging, Lopez delivered a liner to center that Evan Stephens looked to have in control. The outfielder’s diving grab came up empty, however, unable to handle the hard-hit line drive from Lopez. Two runs scored on the play, and Miami gained its first lead of the game at 4-3.

After a clean eighth inning from junior Javi Salas, senior closer Eric Nedeljkovic (2-2) came on after a 26-minute rain delay. The Folsom, Calif., native allowed the tying run on an RBI double from pinch-hitter Charlie Morgan, while a bases-loaded, two-out single from Conway won the game in walk-off fashion.

The Hurricanes will return to Gene Hooks Field at Wake Forest Baseball Park Sunday for their series finale with the Demon Deacons. First pitch for the match-up is slated for 1 p.m.