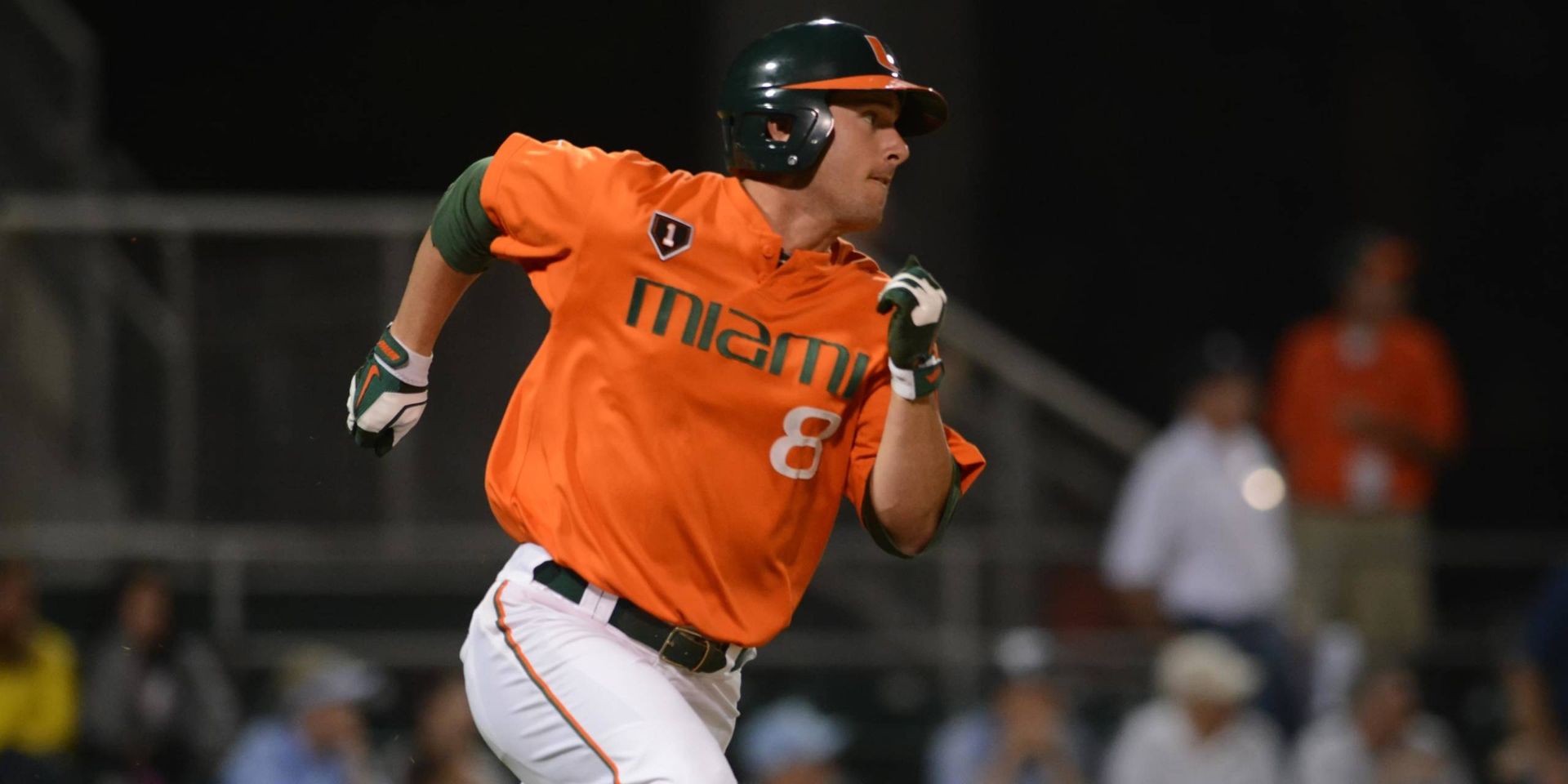 CORAL GABLES, Fla. – The Miami Hurricanes renewed their rivalry with No. 5 Florida State Friday night at Alex Rodriguez Park at Mark Light Field, dropping the series opener by a final score of 4-2

In a game delayed 45 minutes due to lightning, the hosts received a strong performance from sophomore lefthander Chris Diaz and some timely two-out hitting, but fell after surrendering four runs over the game’s final two innings.

The Seminoles struck for a decisive run in the top of the ninth, as senior Eric Nedeljkovic (2-1) allowed his first run of the season on an RBI double from Giovanny Alfonzo down the rightfield line. The hit, which plated a pinch-hitter Casey Smit from second, gave the visitors their first lead of the night at 3-2.  FSU would tack on another run on an RBI single from John Sansone.

The Hurricanes (20-13, 5-8 ACC) broke a 0-0 deadlock with four straight two-out hits off Florida State (26-4, 9-4 ACC) starter Luke Weaver in the bottom of the fifth inning. After junior Alex Hernandez and senior Chantz Mack each connected for opposite-field singles, senior Alex San Juan opened the game’s scoring with an RBI single of his own to rightfield.

After a brief mound meeting, Weaver stayed in the game. Senior Michael Broad then roped a 1-1 offering into the leftfield to plate Mack, but San Juan was thrown out at third base to end the inning.

Diaz, who has anchored Miami’s rotation as the Friday night starter, delivered another quality outing against a talented Seminole offense. The Florida City, Fla., native went 7.1 innings, allowing two unearned runs while striking out a career-best seven batters. His impressive outing was just two-thirds of an inning shy of matching his career long, set earlier this year in a win over No. 22 Virginia Tech.

The southpaw, who delivered his sixth quality start in eight opportunities this season, retired a string of eight straight batters before getting into a jam to open the eighth inning.

John Sansone led off the frame with a single and took second on a throwing error from junior third baseman Brad Fieger that made its way past first baseman Christopher Barr. Seth Miller then delivered an RBI single to cut the deficit to one, while a single from Brett Knief and a two-base error charged to Chantz Mack on a ball that slipped under his glove tied the game at 2-2.

With Knief at third, Diaz struck out DJ Stewart before he was relieved in favor of Nedeljkovic. The duo did an impressive job of stranding Knief, as Nedeljkovic struck out Noles’ slugger Stephen McGee and induced a pop-up from Marcus Davis to keep the game tied up at 2-2.

The Seminoles would strike for two more in the decisive ninth, as Miami fell to its in-state rival for the fourth straight matchup.

The Hurricanes will return to Alex Rodriguez Park at Mark Light Field Saturday for game two of their three-game series with FSU. First pitch for the game, set to be televised on CSS and ESPN3, is set for 7 p.m.