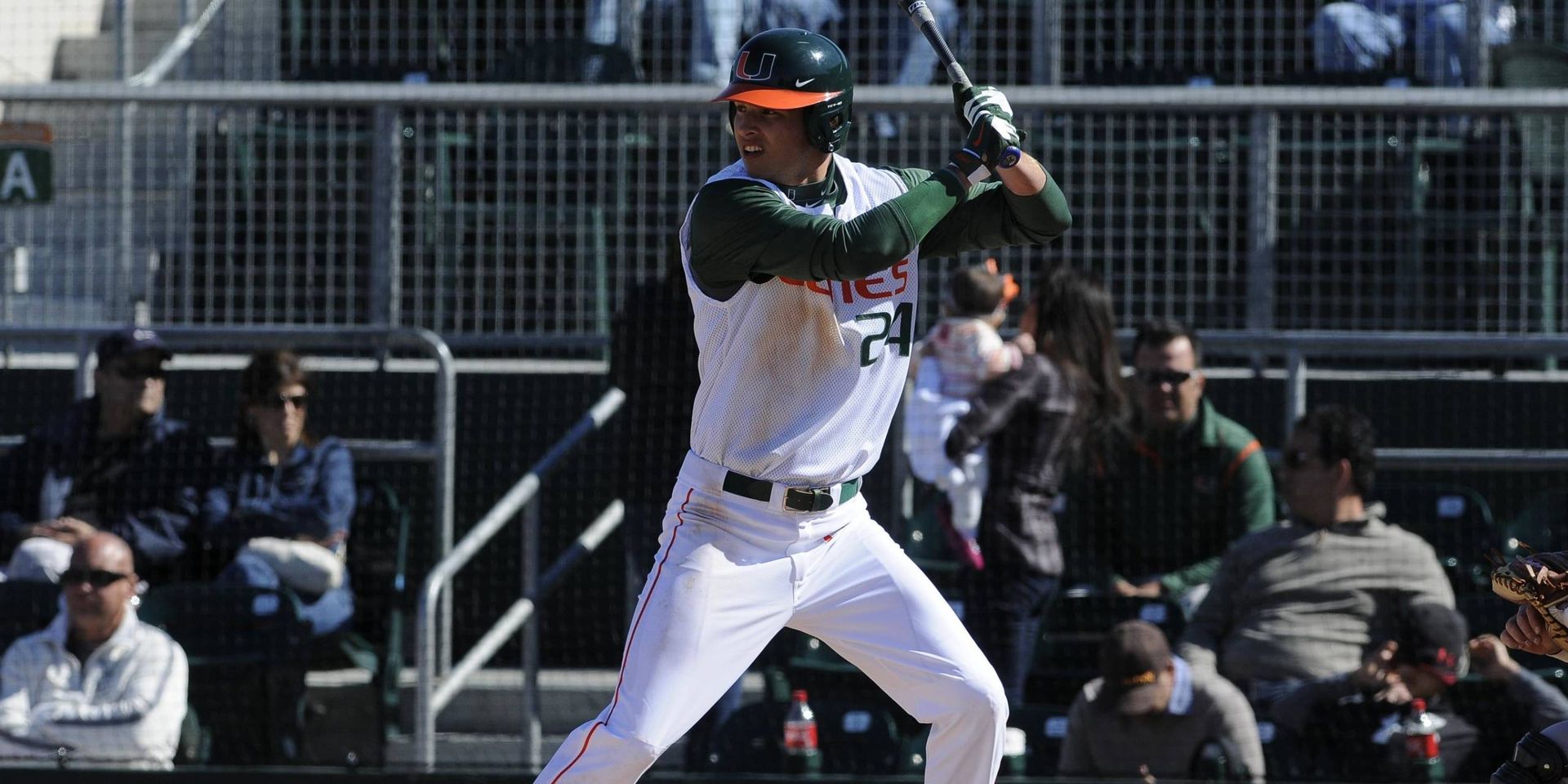 CHARLOTTESVILLE, Va. — Miami took an early lead and didn’t look back, capturing the Sunday finale with No. 9 Virginia by a final score of 4-3 at Davenport Field.

The Hurricanes exploded for four runs in the first, as four different players registered RBI’s in the frame. After Christopher Barr and Ricky Eusebio reached via back-to-back singles to open the inning, senior Chantz Mack was issued a walk by Virginia starter Nick Howard to load the bases.

An RBI single from Brad Fieger fell just in front of diving centerfielder Brandon Downes to plate the game’s opening run. Senior Michael Broad looked like he might have a single of his own, but an impressive diving play from shortstop Brandon Cogswell forced an out at second and scored Eusebio for the fielder’s choice RBI.

On the first pitch he saw from Howard, freshman Grant Heyman connected on his first career double, Miami’s fourth basehit of the inning, to make it 3-0. The Pittsford, N.Y., native went opposite field past the third baseman for the hit, which plated Mack and advanced Broad to third. Junior infielder Alex Hernandez would cap the scoring with a sacrifice fly to right, as the visitors jumped out to a 4-0 lead.

Sophomore lefthander Andrew Suarez battled his way to four effective innings. The Miami, Fla., native scattered five hits and two earned runs during his outing, striking out two and walking two. After allowing a two-RBI double to Reed Gragnani in the second, Suarez worked his way out of two big jams in the early innings that forced a high pitch count.

With two outs in the third, Suarez allowed back-to-back singles and then hit Kenny Towns with a pitch to load the bases. Facing Mike Papi, who entered the finale with five hits through the first two games of the series, Suarez induced a shallow flyout to leftfield to end the threat. The southpaw faced a similar situation in the fourth, as Virginia outfielder Joe McCarthy entered the batter’s box with the bases loaded and two outs. Suarez was up to the task once again, however, getting another fly out to left to work himself out of the jam.

Freshman lefthander Thomas Woodrey (4-0) delivered a strong performance in relief of Suarez. The Lighthouse Point, Fla., native surrendered just one run in his 3.1 innings of work, allowing just three hits and walking one. Senior Eric Nedeljkovic, entering with one out in the eighth inning, recorded his sixth save of the season in the victory.

The Hurricanes will return home for a midweek matchup with Bethune-Cookman before a home series with rival No. 4 Florida State. First pitch for Wednesday’s matchup with the Wildcats is set for 6 p.m.