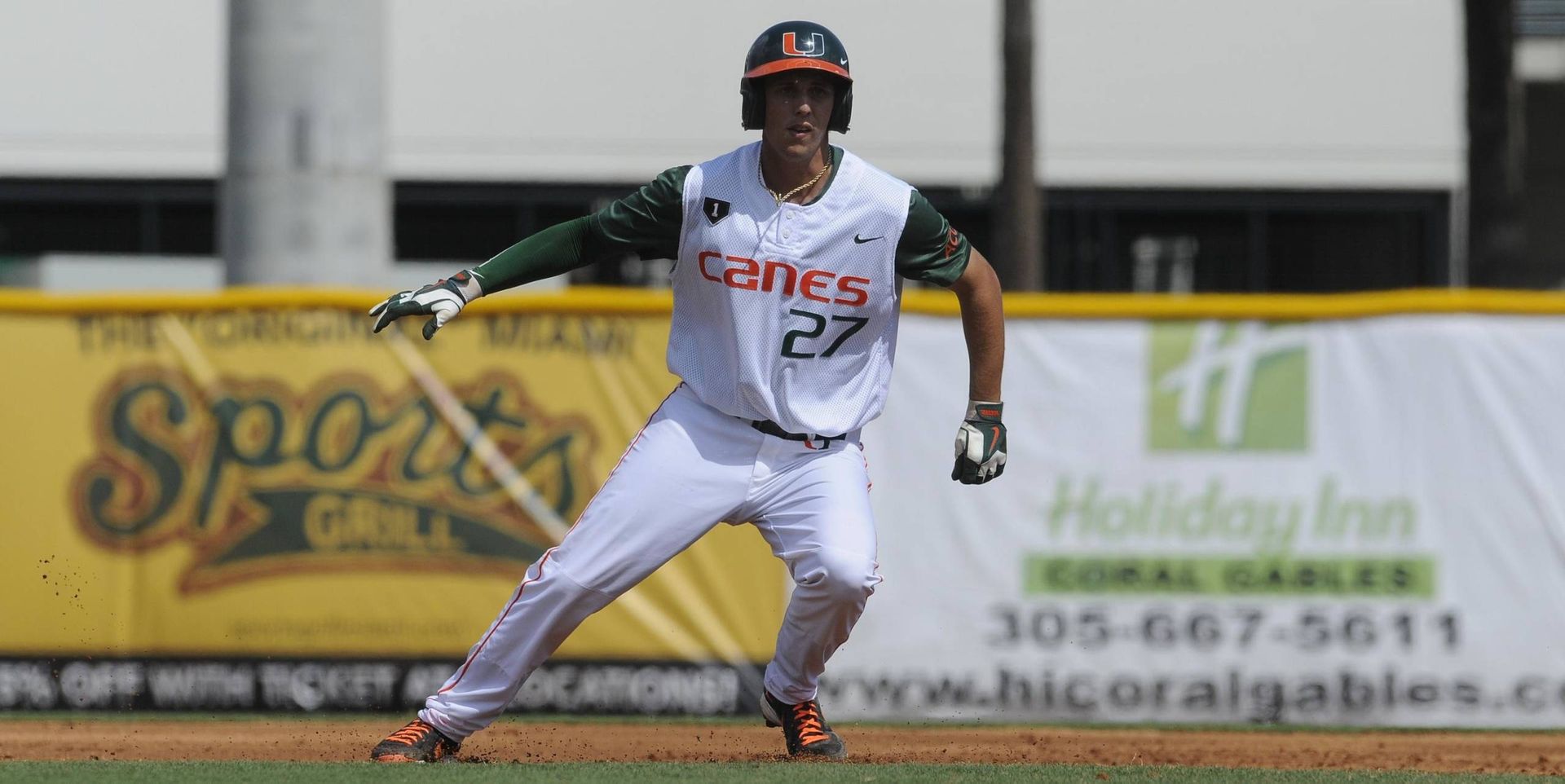 CORAL GABLES, Fla. – Behind an impressive offensive performance from junior third baseman Brad Fieger, No. 29 Miami captured game two of its midweek set with visiting Illinois State by a final score of 9-2.

“It was a good game for us, I thought we played well,” head coach Jim Morris said. “Our defense was good, we pitched well, and when that happens, you’re normally in pretty good shape.”

Fieger, who connected for his sixth multi-hit game of the season in the victory, crushed a late bases-loaded double to help the hosts open up a five-run lead. The Naples, Fla., native belted three doubles, reached base four times, and set a new career high with five RBI’s in the win.

“I saw the ball well today. I was able to put good swings on it,” Fieger said. “I hit a lot of balls hard.”

After falling behind early against the Redbirds in game one, it was the Hurricanes who struck for three runs off Illinois State starter J.D. Learnard (0-1) in the first inning Wednesday night at Alex Rodriguez Park.

Freshman Christopher Barr, making his third consecutive start in the field, opened the action with a single, marking the third consecutive game Barr has reached base to lead off the game. The Royal Palm Beach, Fla., native, who was inserted into the starting lineup prior to Sunday’s finale against Duke, has reached base a team-best 10 times since the 5-3 win over Duke.

After Alex Hernandez struck out, senior Chantz Mack walked and Fieger was plunked by a Learnard offering to load the bases. An RBI single from senior Alex San Juan, who extended his hitting streak to seven straight games, and a wild pitch from Learnard made it 2-0.

The junior righthander’s troubles wouldn’t end there. A bases-loaded walk issued to Garrett Kennedy, Learnard’s third free pass of the inning, gave Miami (14-5, 1-2 ACC) a 3-0 lead. The Hurricanes might have struck for more, but Learnard induced an inning-ending double play from Brandon Lopez to prevent any further damage.

“We could have very easily scored more runs,” Coach Morris said. “In the first three innings, we left eight guys on base. We stranded a lot of guys.”

After delivering a brilliant performance in Miami’s midweek win over UCF on March 6, lefthander Bryan Radziewski posted another solid outing in his third start of the season. With a comfortable lead from the outset, the Miami, Fla., native allowed just one run in his five innings of work, scattering four hits while striking out five batters. The lone run scored off Radziewski (2-0), which came on an RBI groundout from Eric Aguilera in the third inning, was the first earned run allowed by the southpaw this season.

Wednesday’s matchup was very unlike its predecessor Tuesday night, when Miami pitching struggled in a blowout loss to the Redbirds.

“We had practice today, we have to get our minds right,” Radziewski said. “Much different energy, much different attitude than yesterday.”

After Illinois State responded with a run in the top of the sixth, the Hurricanes would blow the game open on Fieger’s second double of the game. The hit, ripped off Redbirds’ reliever Matt Schmitt down the leftfield line, plated three Miami runs, as the hosts took a commanding 7-2 lead. The junior would tack on another double in the eighth inning to make it 8-2, while an RBI single from freshman Ricky Eusebio plated Fieger for the final run of the game.

Next up for Miami is a trip to Chapel Hill, N.C., for a weekend series with No. 1 North Carolina beginning Fri., March 15.

“Our goal is to win two out of three on the road,” Coach Morris said. “We’re going to have to pitch, get solid defense, and get some timely hitting…that’s the way we’ve been winning games, just like tonight.”

First pitch for the series opener, set for broadcast on ESPN3, is slated for 7 p.m. from Boshamer Stadium.