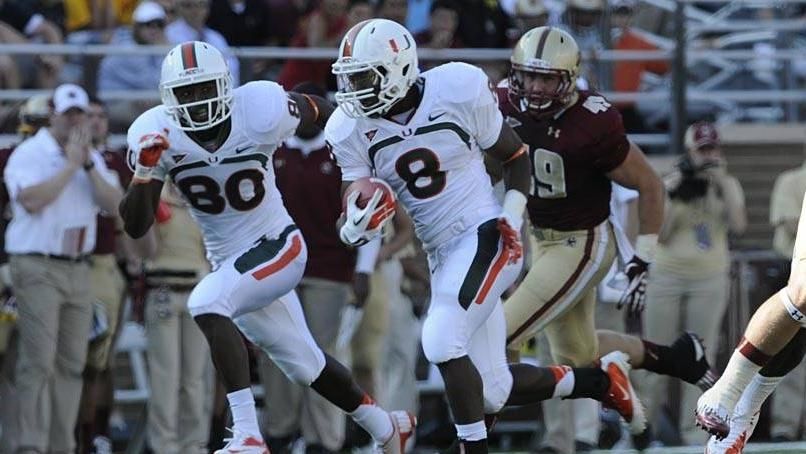 BOSTON (AP) – On the firsttouchdown run of his college career, Duke Johnson broke a handful of tackles ona 54-yard romp to the end zone.

The second one went even longerand the Miami freshman was untouched all the way, helping the Hurricanes to a41-23 win over Boston College on Saturday.

“Duke’s play obviouslyboosted the momentum,” receiver Phillip Dorsett said after watchingJohnson run for 135 yards and two long touchdowns to help the Hurricanes comeback to beat BC. “Without him, we don’t know what’s going to happen.”

Johnson scored from 54 and 56yards out after the Eagles opened a 14-0 lead, and Stephen Morris threw for 207yards and a touchdown in the season opener for both teams. The Atlantic CoastConference schools also played each other in the 2011 finale, when BC beat theHurricanes in Miami for the first time since Doug Flutie’s famous desperationheave in 1984.

Chase Rettig completed 32 of 51passes for two touchdowns and a career-high 441 yards – the most since for a BCquarterback since Flutie. He led the Eagles to scores on their first twodrives, but Miami tied it on Denzel Perryman‘s 41-yard interception return toend the first quarter.

Johnson’s second score made it31-23. The Eagles fumbled the ball away on consecutive drives to start thefourth quarter to set up a field goal and touchdown that gave Miami a 41-23lead.

“We played sloppy, madesome mistakes that hurt us on offense,” BC coach Frank Spaziani said.”But, defensively, we’ve got to play better. Nobody made plays.”

Johnson carried the ball justseven times in his debut. He also caught three passes for 10 yards and returnedthree kickoffs for 69 more – a total of 214 all-purpose yards.

“I had freshmanjitters,” said Johnson, who compared his running style to formerHurricanes back Clinton Portis. “I was excited, nervous. I was just readyto play football. When older guys tell you, ‘This is what you worked for.You’ve played,’ that’s what relaxed me.”

BC cut the deficit to 41-30 onRettig’s 17-yard touchdown pass to Tahj Kimble, then got inside the 1 yard-lineon a third-down pass to Spiffy Evans with less than 3 minutes left. With theclock running, Rettig lined up and tried to sneak it in but was stopped for nogain; the play was reviewed and upheld.

Miami took an intentional safetywith 4 seconds left rather than punt from deep in its own end zone.

“I couldn’t be prouder of agroup, down 14-0 in the ACC in a terrible environment, rattled a little bit,dropping balls and things like that,” Hurricanes coach Al Golden said.”Just to hang in there – whew. That was a good job just to hang inthere.”

The 32 points was the most forBC against a Football Bowl Subdivision team since it beat Weber State in 2010,and the 542 total yards were its most since playing North Carolina State in’08. Alex Amidon had 10 catches for 149 yards, and Kimble had eight for 130 anda touchdown to go with 10 rushes for 50 yards.

“We left some plays out onthe field. But we came out of it with some positives. The offense can reallymove the ball,” Amidon said. “There were definitely a lot more pointsthat could have been scored. But 32 points from this offense – I can’t rememberthe last time we scored 32.”

The Hurricanes improved to 24-5all-time against BC, which had won two straight in the series, including the24-17 victory last season that left Golden with the end to a tumultuous firstseason and a 6-6 record. The school did not go to a bowl because of aself-imposed ban in response to an improper benefits scandal.

Boston College went 4-8 lastseason, missing a bowl for the first time since 1998, and Spaziani’s job islikely on the line unless the Eagles improve.

It looked good at the start.

Rettig led BC on two quicktouchdown drives to open the game, scoring on Andre Williams’ 4-yard run on thefirst drive of the game and then a 15-yard pass to Jake Sinkovec. But Miamitied it before the quarter was over, scoring on Eduardo Clements‘ 1-yard runand then, on the final play of the first, Denzel Perryman‘s 41-yardinterception return.

After Nate Freese kicked a26-yard field goal to give BC the lead again, Johnson broke loose from 54 yardsout and scored to make it 21-17. BC took the lead with two more field goals,but Miami’s Jake Wieclaw answered with one and then Johnson broke another longone.