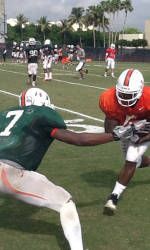 CORAL GABLES, Fla.–The Canes wrapped up their first of two practices this week leading up to Friday’s scrimmage at Bishop Verot High School in Fort Myers. The team was joined by students who came to watch the practice as a part of Student Appreciation Day.

Weather Report: 77 degrees with winds out of the east at 11 mph and 62% humidity.

After beginning the day with their usual drill circuit, stretching and position drills, things really started to heat up. Coach George McDonald could be heard telling the quarterbacks “Practice is just getting ready to start!” before the offense and defense matched up in full team action.

Coach Micheal Barrow also was seen rallying the defense chanting “No toughness no title!” as he made wrestling title belt gestures.

Philip Dorsett started the full team action with a bang as he returned a punt back for a touchdown during a special teams drill. He would later follow up that effort with a stunning one-handed over-the-shoulder grab on a deep ball from Ryan Williams.

Also on offense, Eduardo Clements had a series of quality runs for double-digit yardage, shaking and running through defenders in the process. Mike James provided some bruising runs as he never shied away from contact. Kendal Thompkins and Rashawn Scott represented the receiving corp well along with Dorsett, as Thompkins broke two tackles after a catch over the middle to score, and Scott pulled in a  couple of tough catches in traffic on each sideline.

As the practice progressed, the defense started to assert their dominance, kick-started by Brandon McGee breaking up two passes in the endzone. The defense went wild after Jimmy Gaines jumped a flat route to take an interception in for a touchdown and after Kelvin Cain forced a fumble in the backfield, truly taking advantage of his newly-acquired black jersey. Thomas Finnie and Denzel Perryman prevented any momentum from the offense by batting down two near-touchdown passes with diving efforts.

Canes Spotting: Jonathan Vilma and Jimmy Graham stopped by practice once again before working out, as well as recent former players JoJo Nicolas and Joel Figueroa.

The Hurricanes will return to Greentree Practice Fields on Thursday for their last practice before their second Scrimmage on Friday.