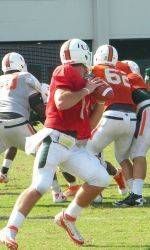 CORAL GABLES, Fla.–Thursday’s practice was the final tune up before this Saturday’s scrimmage, so coaches turned the intensity up a notch to get the players in game simulation.

The Weather Report: 80 degrees with winds out of the north at 4mph and 72% humidity.

The practice started off with the usual stretching period followed by an intense series of circuit drills. The highlight of the early workout was when Darius “Plug” Smith got through the line and blocked a kick; his defensive teammates went wild.

More special teams drills took place as the kickoff teams worked to get their timing down. Head Coach Al Golden oversaw the defensive back drills focusing on drop backs in coverage.

In full-team drills, both the offense and defense showed flashes of brilliance and there were several big plays. Gionni Paul had a nice diving pass deflection and Brandon McGee broke up two passes as well.

BIG HITS
• Eduardo Clements took a short pass from Ryan Williams for a gain of about 25 yards, but safety A.J. Highsmith finished the play with a big hit.
• Eddie Johnson, Ray-Ray Armstrong, Shayon Green and Curtis Porter wrought havoc in the backfield, laying down big hits on the offense.

NICE CATCHES
• A big catch in traffic over the middle by Asante Cleveland.
• A beautiful touchdown pass to Kendal Thompkins from Ryan Williams on the run.
• A great juke after a short pass by Rashawn Scott to create a big gain.

Overall, intensity and fast pace were the names of the game today. Players and coaches were hyped up in anticipation of the first scrimmage.
Scrimmage #1 | Saturday, March 24 | Ted Hendricks Stadium

Golden Nugget
“Think of it as a baton in a 4 x 400 relay. As soon as that kicker comes, you’ve got the baton. If you’re early, you’re offsides.”  -Coach Golden during kickoff drills