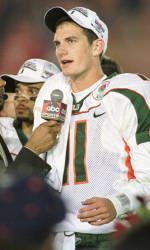 CORAL GABLES, Fla. — Here’s one of the best ways Miami offensive line coach Art Kehoe can illustrate how good the 2001 Hurricanes were. There was one game where he remembers being unable to find anything to do at halftime. No adjustments to make, no meetings, no second-half strategizing, nothing.

And that was the national championship game.

“I know this,” Kehoe said. “I will put that 2001 team up against anybody. No one can argue how good, how dominant, that team was.”

In short, much of Miami’s athletic history will be on full display.

Get Your Tickets To The Game: Virginia vs. UM, Thursday at 8 p.m.
More Information: UM Details on Event

“Clearly, a lot of those guys have set the standard here,” Miami coach Al Golden said. “And that’s what we’re trying to get back to, to be honest with you. Again, we’re not going to get there overnight. But, man, they set the standard with the way they play and their work ethic and commitment to each other.”

It’ll be the second time in less than a week that Sun Life Stadium has hosted a celebration for a national college football champion. The Miami Dolphins paid homage to the 2008 Florida Gators on Sunday, coinciding with Tim Tebow’s return to the stadium, that time as a member of the Denver Broncos. With Sun Life also being where the Hurricanes now play, the “Gator Day,” as many called it, wasn’t overwhelmingly well received.

This week, no one seems to be complaining.

“I’m just glad we got it right and honor the right team on Thursday night,” Golden said.

The ceremonies are all being held in concert with Miami’s Atlantic Coast Conference game against Virginia.

Most of the 2001 Hurricanes will not be there Thursday night, many of them with a very good reason – they’re still in the NFL. More than 30 players from that championship team went on to the NFL, and quite a few are remain there, a list that includes Jon Vilma, Ed Reed, Jeremy Shockey, Frank Gore, Andre Johnson, Kellen Winslow, Willis McGahee, Antrel Rolle, Vince Wilfork and D.J. Williams, among others.

The Miami players of today have heard countless stories about the 2001 club, and some shake their head in disbelief when they realize that it was difficult for players like Johnson and even Sean Taylor just to get on the field for that Hurricanes team at times.

“Goes to show how much talent they had,” Miami linebacker Sean Spence said. “It’s just a blessing just to be walking in the same doors they walked in.”

Larry Coker coached that team, and in his eyes, the fact that so many players have persevered in the NFL for so long and therefore will be unable to attend Thursday is a tribute in itself to the greatness of the 2001 club.

“So many really just terrific guys,” said Coker, now the coach at Texas-San Antonio. “It thrills me when I get a chance to watch a little bit of football or see some clips to see a Roscoe Parrish doing some things or an Antrel Rolle making plays or Ed Reed, on and on and on, it’s a thrill for me and I’m really happy for all those guys. They’re not just great players, they’re great people.”

Coker took over a juggernaut program at the start of that 2001 season. The Hurricanes started the season ranked No. 2 in the AP Top 25 and never went any lower, getting to No. 1 and staying there for the final 10 polls of the season. On the last three of those, they were unanimously selected for the top spot.

The Hurricanes were idle for 19 days after the Sept. 11 terrorist attacks, and Coker said one of the most memorable games for him remains the Sept. 27 trip to Pittsburgh, a 43-21 Miami victory. But the game that proved to him the Hurricanes were title contenders that season came Oct. 13, when Miami visited Florida State, forced six turnovers and posted an easy 49-27 win.

“I knew then we were going to be really hard to beat. They hadn’t lost a game in 10 years at that stadium,” Coker said.

Miami was truly tested only once the rest of the way, a 26-24 road win at Virginia Tech to end the regular season. After that, only the Rose Bowl against Nebraska remained, and the Hurricanes rolled out to a 34-0 lead at the half on the way to a 37-14 title-clinching victory.

The debate has raged since about whether the 2001 Hurricanes are the best college team ever, and it will continue for years to come. For his part, even Kehoe – who has rings from all five of Miami’s title clubs – isn’t sure, saying he thinks the 1986 and 2000 teams that fell short of winning national championships may merit being in the conversation.

This much, however, is without dispute: The 2001 Canes were perfect.

“We could throw it. We protected the passer well. We ran the ball pretty good. On defense, we could play pass and run. On special teams, we were really, really good. We had lots of depth and lots of competition and the coaching staff, I thought, was solid as hell,” Kehoe said. “I’ll say it again: I will put that team up against anybody. I don’t know how we could go play the games, but I’ll take them against anybody.”