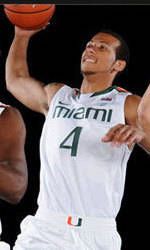 CORAL GABLES, Fla. – With the first University of Miami men’s basketball practice just four days away, HurricaneSports.com counts down 10 things to look forward to in the first season under Head Coach Jim Larranaga.

Kadji is a 6-10, 248-pound forward/center played in 42 games at the University of Florida before transferring to UM last fall. Coming out of high school he was the fifth-ranked center in the class of 2008 by both Rivals.com and Scout.com.

McKinney Jones, a 6-5, 205-pound transfer from UMKC, played in 61 games for the Roos, averaging 10.9 points and shooting a team-best 47.6 percent in his sophomore season. He also dished out 60 assists, the second-most on the team, in his second year.

Six-foot-two-inch guard Bishop Daniels is a sharpshooter with tremendous jumping ability who came to Miami from Raleigh’s Word of God Christian Academy. Daniels was rated the No. 4 dunker in the 2011 class by Rivals.

Shane Larkin, a 5-11, 160-pound point guard from Orlando, rounds out the Hurricane newcomers. Larkin led Dr. Phillips High to a 27-6 record his senior season by averaging 18.8 points, 6.3 assists and 3.5 steals per game.

Michael Huger (left) begins his fifth season as a coach assisting in all aspects of the program. He brings six seasons of collegiate coaching experience and nearly a dozen years of professional basketball experience to UM.

Eric Konkol (middle) enters his eighth season as a member of head coach Jim Larranaga’s staff. He assists in all aspects of the program including recruiting, practices, individual player workouts and game preparation.

Chris Caputo (right) is in his 10th season on Coach L’s staff and seventh as an assistant coach. His primary responsibilities include recruiting and scouting the opposition.

5. The Atlantic Coast Conference
“The ACC provides the nation’s most exciting brand of basketball,” said Larranaga. “This is why I came to Miami and I am looking forward to the challenge that it provides our program. I can’t wait to start the season.

With a motto of “A tradition of Excellence … Then, Now and Always” people must agree that the Hurricanes play in the best basketball conference in the country. The Atlantic Coast Conference and its member institutions represent the best in academic and athletic excellence.

The ACC has had at least one team ranked in the top 10 of the final AP Poll in 50 consecutive seasons.

The ACC is the only conference to have each of its teams make at least one NCAA Tournament appearance over the past five years.

6. Sebastian and Spirit Squads
With five National Championships in football, and countless Bowl and NCAA Basketball Tournament appearances, the spirit program has been a vital part of the athletic program at UM. Sebastian the Ibis is a staple at all men’s basketball games, dazzling the crowd with his fan interactions and creating energy throughout the BankUnited Center.

The University’s dance team, known as the Sunsations, was founded in 1985 as entertainment for basketball games and since its inception, the group has developed into one of the best dance teams in the nation.

The cheerleading program at Miami consists of two teams, the coed team with 15 members and the all-girl team which is made up of 15 females.

7. The Canes On the Air
An all-time high 189 national television appearances highlight the 2011-12 Atlantic Coast Conference basketball schedule. In addition, each of the league’s 96 conference games will be broadcast live. Fans can catch the Hurricanes on the ESPN family of networks (ESPN2, ESPN3 and ESPNU) at least 20 times this season.

The ACC is in the first year of a new 12-year agreement with ESPN, in which all of the league’s conference games schedule will be carried by either ESPN, ESPN2, ESPNU, ESPN3.com, the ACC Network or the ACC Regional Sports Networks (RSN). All conference games carried by the ACC Network, or the Regional Sports Network (RSN), will also be broadcast live nationally on ESPN3.com, as will selected games by ESPN.

Catch all Hurricane games on WQAM 560 with Joe Zagacki and Josh Darrow making the call. Miami home basketball games will also be aired on the student station, WVUM 90.5, the Voice of the University of Miami. Many of the games will also be broadcast through WRAZ- CIMA 106.3 FM the Spanish language flagship station of the Miami Hurricanes.

HurricaneSports.com offers the most up-to-date website in college sports, with information on every UM sports team available at your fingertips. On the official site of Hurricane Athletics, fans can catch up on the latest news, read in-depth player bios and watch videos on their favorite Miami teams. Also check out the UM Sports Calendar to schedule your week of watching Canes sporting events and keep track of everything happening with UM athletics.

You’ve already found your way to HurricaneSports.com, the Official Website of Miami basketball, now venture into our explosive videos. Canes All-Access offers on-demand video including highlights, features, post-practice interviews, one-on-ones and exclusives from behind the scenes of UM basketball.

8. The Hurricanes on Social Media
Follow Coach Jim Larranaga @CanesCoachL on Twitter as he provides news from inside the program walls, insights on his life away from the court and updates about his appearances with Dwayne Wade, Erik Spoelstra and many others.

You can also follow @CanesHoops for more insight on the Hurricanes basketball team. Through the Twitter feed, fans will gain a great way to see the personality of the program and follow the team.

For photo galleries, news and a place to interact with other UM friends, the MiamiHurricanes Facebook page is the place to go.

For more in-depth coverage focusing on just the men’s basketball team, check out MiamiBasketball on Facebook.

Opened in 2003, the BankUnited Center , which seats 7,200 fans for basketball games, is located on the University of Miami’s beautiful Coral Gables campus. The venue also hosts concerts, trade shows, lecture series and sporting events, in addition to serving as the home to the Hurricanes’ men’s and women’s basketball teams.

With its grand opening in January of 2003 — a 64-61 overtime win over North Carolina, the BankUnited Center became the University’s first on-campus venue with seating to accommodate large events offering an ideal capacity for concerts, conferences, lecture series, banquets and more. It significantly increases the University of Miami’s collegiate experience for its students by allowing on-campus events such as commencements, sports, convocations and pep rallies. The community also benefits from the venue’s utilization as a showcase for a host of family shows and other special activities.

The BankUnited Center has 25 suites. Each suite is equipped with 12 box seats with three additional bar stools, a lounge area, television and phones, along with a kitchen area with a bar and refrigerator.

The BankUnited Center is managed by Global Spectrum. The Philadelphia-based company is part of one of the world’s largest sports and entertainment companies, Comcast-Spectacor, which also owns the Philadelphia 76ers (NBA) and the Philadelphia Flyers (NHL). To get your seat at UM basketball games, call 1-800-GoCanes or click here for Ticketmaster.

Three statistical leaders return for the Hurricanes, led by Malcolm Grant and Durand Scott. Reggie Johnson will return to the court for ACC play after injuring his knee in the offseason.

Among Miami’s 11 returners is leading scorer and All-ACC Third Team pick Malcolm Grant (14.8 ppg, 3.2 apg, 1.8 rpg). Of the 15 All-ACC picks in 2011, just five will return to the collegiate ranks in 2012 — with Grant the only one not suiting up for the Tar Heels. He recorded an ACC-high 2.6 three-pointers per game at a league-high 42.3 percent (19th in the nation), while converting an ACC-best 85.3 percent from the charity stripe.

Miami also returns second-leading scorer Durand Scott, who had a breakout rookie season in 2010. As a sophomore, he averaged 13.6 points (12th in the ACC), 4.2 rebounds and 3.1 assists per game, shooting 44.5 percent from the field, 39.1 percent from beyond the arc and 83.7 percent (third in the ACC) from the charity stripe. Over three NIT games, his scoring leapt to a team-high 19.3 points per game — converting 50 percent from the field and 89 percent from the line — to go with 3.3 assists and 3.3 rebounds an outing. Scott scored in double figures 29 times last season, with six 20-point performances.

Big man Reggie Johnson, who earned 2011 All-ACC Honorable Mention accolades, tested the NBA waters after averaging 11.9 points (20th in ACC), a team-high 9.6 rebounds (fourth in ACC) and a team-best 1.3 blocks per game as a sophomore. He shot 59.1 percent from the field – the third-highest single-season percentage in UM history. His 347 rebounds were the most by a Cane since Rick Barry notched a school-record 475 in 1964-65. Johnson posted 13 double-doubles last season. He is expected to be back on the court in December/January after tearing the meniscus in his right knee during a pickup game in June.

Junior Garrius Adams (7.3 ppg, 3.7 rpg), senior DeQuan Jones (4.5 ppg, 2.5 rpg) and sophomore Rion Brown (4.4 ppg, 2.0 rpg) will add experienced depth to the guard position for the Canes. Senior forward Julian Gamble (4.0 ppg, 3.4 rpg) will sit out the entire season with a knee injury so sophomore forward Raphael Akpejiori (6-10, 230lbs) adds a big body in the paint in the absence of the other two returning big men.