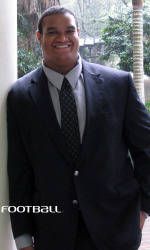 Behind the Facemask: Joel Figueroa

The offensive line is the best that we’ve had.  I’ve been here for a while, as we all know, and we have so much versatility. We have guys who can play guard and tackle and guards who play center and vice versa, which is great. I think we have athleticism, strength and guys are smart and everyone is in their playbook enough to know that whoever is out there and whatever position it doesn’t matter.

Art Kehoe is a character. He’s a great coach and has won championships here so he knows how to get it done. I love his methods of teaching. He doesn’t let you choke too much when he’s trying to force a point. So much history, the man knows what he’s doing so guys tend to gravitate. He’s a winner, everybody likes a winner.

Protecting the quarterback is job number one. I wake up in the morning and I pray first and then I’m focused on protecting my quarterback. Whoever is out there, that doesn’t matter. They are all great quarterbacks; they all bring their little niche to the table. I do whatever it takes to protect them. As offensive lineman it’s our number one priority to always protect the quarterback.

When I look in the mirror, I see in myself a hard-worker. Someone who doesn’t let pain bother him. A person who loves his family and will do anything for his family, as well as his friends. A man who has changed his life a lot. A man that’s given himself up to God. A person that’s hungry and ready to get back on the field and find my place.

Transition I played tackle in high school and then I came here and played guard most of my career. With injuries and guys graduating, I had to move to tackle and transition back. Which wasn’t difficult for me, but at the same time I was dealing with an injury that I kept secret at the time. I didn’t want any distractions. I wanted to focus on the game. It was a pretty bad injury and I couldn’t really perform as well as I wanted to. Now I’m fixed. I got the surgery I needed. I’m just ready to go if I have to make the transition back to guard or stay at tackle or move to center, I’m ready.

Who inspires–my family inspires. The two strongest women in the world that I know are my mom and my sister. I know physically men are stronger, but I definitely think women are stronger overall, especially emotionally. There have been a lot of things going on in my family and we recently lost someone in our family and even though my sister was the most heartbroken by the loss, she was the strongest and kept everyone together. The women in my family are so strong. I admire and respect them.

Best advice is waste no more time–that’s what a former player told me. A lot of people dwell on the past and a lot of people look too far into the future. I feel that you need to focus on the right now and at the end you won’t dwell on the time that you spent, because you’re focusing on the now and whatever is supposed to happen will happen.

I want to bring the U back. I want a national championship. I want it all. I want to win. I want my teammates to win.

I don’t have much, but I’m happy with what I have. I don’t have everything, I’m not rich, but I have everything that I need, which is important. There’s not much that I want in this world, because I have what I need and I’m thankful for that. I thank the Lord. I just want to win.

Every year the team has gotten closer since I’ve been here. This year with new coaches and everything is different; it feels like we’ve never been this close. I feel that plays a huge role when we’re on the field. Because when you wouldn’t tell that one guy “you have to keep pushing, keep striving, you have to win you have to make it.” That goes a long way in the game, I feel like what we’re doing right now as far as friendships and partnerships with our teammates and making sure that we’re all focused will translate and help us out on the field.

My Favorite book is the Bible. I learned a lot reading the Bible. I consider myself spiritual and it has helped me a lot through hard times. Even when I’m happy and nothing’s going on, it is still a blessing that I have that in my life. That’s what I live by. That’s why I get up in the morning and what I believe in. That’s why I do the things I do. That’s why I’m here.

At the U, I’ve learned so much from the younger guys, believe it or not. It helps me help even more people out. I look at the young guys and see myself in them. I used to do some of the same things. Some things the coach tries to get through to them, they don’t understand maybe because they feel that coach hasn’t been through what they been through. So I put myself in their position because I feel like I was there. And from those guys, I learn more. I learn to understand what we need to do to get the young guys to understand what he’s doing wrong. The younger guys really do help me out a lot, even though I don’t tell them that. In turn, I can help the coaches. Like telling coaches, the reason I don’t think he’s doing this or that is this and that–helps the team.

Running through the smoke feels like it’s your birthday and Christmas at the same time and a new video game just came out. You want it so bad and you just can’t believe it. For a split second, time freezes and you just play in your mind how you got there. I single out one fan and can see that person’s joy and I’m thinking, `I’m doing this for you all.’ I just love the feeling. I can’t wait to go back out there. I’m blessed that I still have another year to play the game and get back out there.