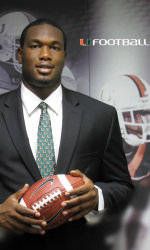 Behind the Facemask: Jermaine Barton

CORAL GABLES, Fla.– No dream comes true without sacrifice and these young men have worked to make their dream of playing at the U come true. Here are the men behind the sacrifice…

I’m a Hurricane because I want to be the best.

One thing that everyone should know about Miami football is it’s more of a family than anything.

Other than football, I’m talented at basketball. I usually play power forward or small forward, but I can kind of play all five positions. I like to think I can handle the ball. I got offers for basketball, but got bigger offers for football. I’ve been playing basketball since I was in eighth grade. I started playing football in 10th grade. I’ve always played offensive line.

The song no one would believe I have on my iPod is “Party in the USA” by Miley Cyrus. Another one is “Bohemian Rhapsody” by Queen.

No one can believe I like to play chess. I’ve been playing since I was eight or nine years old. My cousin got me started. I still play now when I can, but no one ever really wants to play. I taught Darion Hall how to play.

People might be surprised to know that I still play basketball. I play every weekend whenever I can at the Wellness Center. I really like it, I sort of wish I still played.

If I could spend a day with anyone, it would be my mother. I spend days with her all the time, but would still say her. She was never really into sports, but my older brother was. She just let him and I do what we wanted. Once we started getting recruited, she got into it. She likes the Heat and I like the Lakers, so we talk smack all the time. She watches SportsCenter all the time now.

I’m the youngest of eight kids. I have one older brother and I have six sisters too.

The most influential person in my life, other than my mom, is George Smith, my head football coach in high school. I was a really bad kid coming into high school, and he kept giving me chances and always tried to get me right. He got me involved in football. I went to St. Thomas Aquinas for football, but I didn’t ever want to play, I just wanted to play basketball. He signed me up for football but I never went to practice, I would only go to the games and sit on the sidelines. Sophomore year, he got me to play. I played JV that year, and he took me under his wing from there.

When I was six years old, my sister and I used to watch the “The Land Before Time”, the dinosaur movies. I remember we watched one where they’re trying to find the last leaf to eat, so I went outside and I ate a leaf. I thought it tasted horrible. I realized you can’t believe everything you see on television (laughs).

Football has given me standards to live by and values in life. Being on time, dressing appropriately, and being properly prepared.

I never thought I’d be at the University of Miami playing football. I thought I’d be playing basketball somewhere. Growing up, I always wanted to be a Gator. But I took a visit there and really didn’t like it. My brother went to Florida State, and I lived with him when he was in college for about a year or so. I didn’t really like it either.

I was raised in Coral Springs, 30 minutes north of Fort Lauderdale. I was raised by my mom to be respectful to adults, to be nice to girls, and to respect other people, and to always give my best work. I was also raised on Jamaican food.

My favorite song right now is “I Cook” by Lil B. I don’t think he’s a good rapper at all. I just really like the beat. This guy might be the worst rapper I’ve ever heard (laughs).

If I was a superhero, my power would definitely be to transport or teleport places.