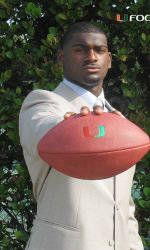 Behind the Facemask: James Gaines V

I’m so grateful to be here. I just make sure to thank God every day that I’m here.

I wasn’t really heavily recruited. I was recruited to the University of Buffalo, University of Akron, and I committed to Buffalo. I de-committed because the coach left. Once he left, I opened up my recruiting again, and the University of Miami came in. I was like “oh man!” I didn’t even need to take a recruiting trip, but I took one anyway (laughs). I don’t tell many people that, but this is my dream school. I always wanted to come here. I would never tell Willis McGahee this, but he’s my favorite player. He’s always in the weight room and we always jaw at each other. It was amazing, when I heard that Miami was interested.

When I was six years old, it was my first year playing football. I played for the Buffalo Vets, and I quit. I quit football. It wasn’t fun, I didn’t like it.  They were hitting me too hard (laughs). When I quit, I went home and my dad wasn’t too happy. The next year, I tried again and played for another team, the North Buffalo Rams. That’s when I fell in love with the game.

Playing football has given me many opportunities to get out of my hometown of Buffalo, New York. Not many people leave Buffalo, people tend to stay. So it’s given me an opportunity to see something new.

Getzville is a suburb of Buffalo. I moved there when I was probably 10 years old or so, because the school was better and neighborhoods were better. My mom and dad wanted me to grow up and get a better education. I ended up going to school back in Buffalo though, so it was kind of funny (laughs). I got an academic scholarship to go to Canisius High School in Buffalo, and that was probably the best decision of my life. Just to go there opened up so many doors. The coaches there really helped me out. I didn’t think I would play college football. That’s just what you do in Buffalo, really, you just go from sport to sport.

Buffalo is full of tough people, it’s hard-working, and it’s a blue-collar town. That’s what helps me out on the football field, hard work.

In high school, I was playing safety. A teammate of mine got hurt, and they didn’t have anyone else, so they moved me to linebacker. I couldn’t stand it. Back then, I liked to hit, it was fun, but I liked doing it on my own time. At safety, you don’t have to hit all the time. Linebacker, you have to strap it up every time (laughs). I’ve learned to embrace it.

Coach Barrow is tough as a coach. Sometimes, he’ll get to me. The man knows what he’s doing. He’s been through it, played in the NFL for 13 years. It’s perfect to come in under him, so I just try to soak in everything that he tells me. I just take it all in and do whatever he says.

I secretly wish that I played basketball. Basketball is fun. I really like it. I’ve been playing it longer than I’ve been playing football. I can’t go out there and play all the time, because I can’t afford to lose weight (laughs). Kobe Bryant is my favorite player, and I let everyone know that in the locker room. I’m from Buffalo, New York, but I’m a Laker fan through and through.

I was raised with a religious background. My dad’s a deacon and my mom’s a deaconess. Music has always been a big part of my life since I was in the womb. My mother sings, my father sings, my sister sings, my grandparents, uncles, aunts, everyone sings in my family. I like to stand back and just listen. I grew up on gospel music.

The U is something I’ve been hearing about since I was a little guy, like I said, this was my favorite school. I would throw up the U with my hands without knowing what it meant, because I saw Willis McGahee do it. I didn’t know much about the school background or anything, but when I thought about it, when I was here, I was in it. I’m here now, I’m in the U, and I love it.

You never know when your last play is going to be. I don’t think about it when I’m playing, I can’t play in fear. I’m really deep in my faith, and I believe that God knows what’s going to happen. Why not play every play hard? Everything that happens is in God’s will. So I just play as hard as I possibly can.