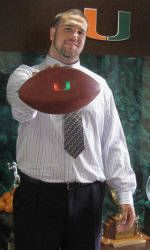 Behind the Facemask: Brandon Linder

Protecting the quarterback is a big thing. It’s what you work out for; it’s what you do everything for. Going over the plays, practicing, it’s what it’s all about. It’s something you should enjoy doing, because that’s your guy back there.

I hold myself to such a high level, that even when I make a good play, if I don’t think it’s a good enough play for me, I get upset at myself. I critique the littlest things, so I’m disappointed with myself even after some good plays.

Competition is what fuels you. If you have no competition, you might start slacking. Competition keeps you on your game. It makes you do the extra stuff you need to do.

When I was six years old I played baseball, but when I moved down here it was just football. I was about seven years old when I started playing football.

St. Thomas Aquinas is a great school. I played little league when I first moved down here, and one of my dad’s friend’s older brothers went to St. Thomas, so my first year down here, me and my dad went with him and his dad to a game. I remember watching Sam Young and a bunch of other guys play, thinking how big they were, and then I went to school there and became one of them. I go back there in the spring just to say hello to everyone. It’s a great place with a lot of opportunity.

I remember when Coach Golden was hired. We were sitting at the awards banquet when Kirby Hocutt came in and told us it was Al Golden. We didn’t really know who he was.  I remember the first meeting with him; the guy said what we needed to do and what was going to happen. Everything’s changed, from the workouts, to the eating, to the grades and study hall. There’s a lot more accountability in all the little things, and I think that’s going to take us far.

I didn’t think it was a difficult transition at all. Everything was starting over, so we were all on the same playing field and level. You just have to start listening to what’s new and what you have to do and forget about all the old stuff.

We are all a team, especially here on the offensive line Me, Shane (McDermott) and Mongo (Jonathan Feliciano) got a house now and everyone’s over there all the time. The line is definitely coming together. We have cookouts, we got an inflatable pool, and it’s a lot of fun.

You go through camp with these guys, you go through everything with these guys, and you become brothers. Especially classmates, you pull toward each other because you’re going through the same thing together starting off new. I, Shane, Jonathan, Jermaine Barton, Seantrel Henderson, and Malcolm Bunche, we all went through the same thing at the same time, and you do it all together. We’d do anything for each other.

My hobbies are fishing and hunting. That’s my life, I grew up doing it. I grew up in the woods and in the water. My dad introduced me to it when I was really young. If the world ends, I can still survive (laughs). For me, it’s a way to clear my head. I’ve been going to the Keys every weekend, fishing, diving and all that. I catch everything from dolphin, tuna, Wahoo to spear shooting snapper and grouper. It’s not lobster season right now, but in August it will be. I have my own underwater camera, so I make my own movies while fishing. Over spring break, I went to Shane’s house and we went fishing on his boat, with his dad. About three weeks ago, we went out to Isla Morada Humps down in the Keys. It’s about 300 feet of water, and we caught an 85-pound amberjack that took 45 minutes to fight.

I’ll never forget my coaches at St. Thomas. Two of the big ones are Coach Smith and Coach Connolly, the line coach. The things they’ve done for me, the opportunities they’ve given me. That’s why I am where I am right now.

Art Kehoe is a great guy. When Coach Stoutland left, we didn’t know who was going to come in. Coach Kehoe came in, and he’s such a fiery guy, a great teacher. He’s such a great guy, he’s always on top of us with our schoolwork and study hall, and he’s a lot of fun.

This season is going to be a big one for me and the team. With the new coaching change, we’re going in there trying to prove everyone wrong with everything they’ve said. I’m excited to see the hard work we’ve been doing and how it’s going to pay off. I’m excited.

My family means the world to me. I always knew I was coming here, but one of the reasons I picked Miami was being close to my family. I go home every weekend, and once or twice during the week too. Especially during football season and during camp, you’re grinding the whole week and you need to recharge your batteries and kind of get away. What better place than with family? I’ve got a bunch of friends at different places, and a lot of them are miserable that they can’t come home all the time, so I don’t take it for granted.

I was raised right. My mom and dad instilled great habits in me, good morals. I think it goes back to the hunting and fishing too, when you do all that kind of stuff, it helps to make you humble. Through the whole recruiting process, I didn’t talk to anyone, never answered my phone for the media. I was doing my own thing. I was raised humble, and to never showboat or anything like that.

I always want to be a good person, and a hard-worker, being out there before and after everyone else. Someone you can count on. A great family man. That’s the legacy I want.

Tradition is the reason I came here to the U. I grew up watching them and going to games, with guys like Michael Irvin coming to talk to you, with Willis McGahee running ladders with you at practice, Reggie Wayne working out with us, who else has that? It’s a blue-collar, hard-working factory, and that’s what I love about it. That’s me.

Playing football has given me a great opportunity. I started playing when I moved from Orlando in 1999, and I played every year since. I always had to play with older kids because I was heavier. After my freshman spring in high school, I started getting looks from colleges and thought I could do something. It just blew up after that, and I was able to come to Miami.