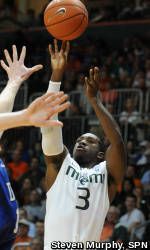 TALLAHASSEE, FLA… The University of Miami men’s basketball team takes on Florida State on Sat., Feb. 26, at 2 p.m. in the back end of a two-game road swing and in the third contest for the Hurricanes this week. The ACC Network is carrying the game on affiliates across the region, including on WBFS-My 33 in South Florida.

Miami has won three-straight road games — including back-to-back ACC road games (Feb. 9 at Wake Forest and Feb. 23 at Boston College) for the first time since the 2007-08 season, when UM picked up consecutive road wins over Virginia Tech (2/9/08) and Georgia Tech (2/17/08).

Winners of five of their last seven games, the Hurricanes are playing their third game over seven days on Saturday after splitting the first two. Miami fell at home to Clemson on Sunday, 63-59, and then bounced back with the 73-64 win at Boston College on Wed., Feb. 23. Miami will return home for Senior Day versus Maryland on Wed., March 2.

Long time opponents, Florida State leads the all-time series over Miami, 37-28, including edging the Hurricanes, 55-53, in their first meeting of the season in the BankUnited Center on Jan. 19, which kick started a four-game skid for the `Canes by a combined 11 points.

In that defensive battle between the in-state foes, Florida State missed its first 10 shots but rallied from a 10-point second-half deficit, scoring 11 consecutive points down the stretch to beat Miami. UM shot 1 for 8 over the final 6 1/2 minutes and lost for the first time in nine home games this season. Malcolm Grant scored a game-high 20 points and was just one of two players on either team to finish in double figures. The game was nearly 10 minutes old before the Seminoles sank a basket, but then trailed only 11-7. Deividas Dulkys’ four-point play with 6:38 to go started the 11-0 run and cut the margin to 48-47. Derwin Kitchen’s driving layup gave the Seminoles their first lead, 49-48, and they led the rest of the way. Florida State missed its final five free throws over the last 1:53 but survived a frantic finish. Grant sank a 3-pointer to cut the lead to 55-52 with 42 seconds left, and when Chris Singleton missed the front end of a one-and-one, the Hurricanes got the ball back. Durand Scott missed an off-balance layup with 10 seconds left, but Bernard James missed two free throws for Florida State. Scott grabbed the rebound and drove the length of the floor, then missed a reverse layup. Miami’s Julian Gamble grabbed the rebound and passed to Grant, but the buzzer sounded before he could launch a shot.

Florida State — who snapped a three-game win streak with a 78-62 road loss at Maryland on Wednesday — has split a pair of road games since leading scorer and rebounder Chris Singleton (13.8 ppg, 7.1 rpg) fractured his right ankle in a win against Virginia on Feb. 12. The Seminoles are 11-2 at home this season, including handing then-No. 1 Duke its first loss of the season, and have not lost at home since a 58-44 decision to Ohio State on Nov. 30. Florida State has three active players averaging eight-plus points per game, led by Derwin Kitchen with 9.8 points, 5.5 rebounds and 3.7 assists an outing. Michael Snaer adds 8.4 points and 80.4 percent free throw shooting, while Bernard James contributes 8.0 points, 5.6 boards and a team-high 2.2 blocks per game, converting 66.9 percent from the field.

In just his second season as a Hurricane, junior Malcolm Grant leads the ACC in thee different categories — three-point field goal percentage (.443), three-pointers per game (2.6) and free throw percentage (.872). With just one more trey, he will move into a tie for 10th place with assistant coach Jake Morton in UM’s career list. Entering Saturday’s game at Florida State, the Brooklyn native has drained 135 threes in 61 career games for an ACC-best (among active players) 2.2 three-pointers per game over his career.

Former Hurricane and current Miami Heat forward James Jones won the NBA three-point contest last Saturday. As a Hurricane, Jones knocked down 124 three-pointers between 1999-2003, 12th most in program history. He converted 47.1 percent (41-87) as a sophomore for the second-best single-season percentage in UM history, while shooting 38.3 percent over his career — seventh best in the UM recordbooks.

Averaging 3.3 assists apiece, Miami’s duo of Malcolm Grant (93) and Durand Scott (91) is on track to dish out more than 100 assists each for the second-straight season. They would become the first UM teammates to accomplish this in back-to-back seasons since Thomas Hocker and Kevin Presto achieved the feat in both 1987-88 and 1988-89. In 2009, Grant and Scott became the first UM duo since 1992-93 to collect 100 assists in the same season and the fourth pair of teammates to do so in UM history.

The ACC Network and theACC.com will be streaming many of the ACC Network telecasts live and for free. By contract, we can only make these live streams available to viewers inside of the “ACC Territory” (NC, SC, GA, FL, VA, MD (DC), MA, RI, ME, VT and NH). For viewers located outside of our local market coverage, you can access our ACC Network Basketball Games via the ESPN Full Court Pay-Per-View service and/or online at ESPN3.com.

Hurricane Gameday with Frank Haith airs on CSS (Comcast Sports South) on Wednesdays at 5:30 p.m. Hosted by Joe Zagacki, the voice of the Hurricanes, and Josh Darrow, each show will break down the latest with the team and give fans insight into the players both on and off the court.

Get your tickets for Miami’s final home game of the regular season versus Maryland on Wed., March 2. For additional information, please contact the Hurricane Ticket Office online at www.hurricanesports.com or by phone at 1-800-GO-CANES.