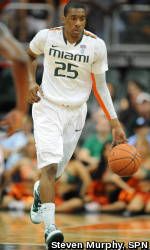 WINSTON-SALEM, N.C… The University of Miami men’s basketball team returns to the road to take on Wake Forest in ACC play on Wed., Feb. 9, at 7 p.m. at Lawrence Joel Veterans Memorial Coliseum. Various regional networks will carry the game around the country, including Fox Sports Florida (FS Florida) in South Florida and FS Carolinas.

The Demon Deacons lead the all-time series, 8-4, although the Hurricanes have won three of the last four meetings between the programs, including two of three meetings last season. Miami defeated Wake Forest, 83-62, in the last game between the teams in first-round play of the ACC Tournament in Greensboro on March 11, 2010. In that game, Winston-Salem native Reggie Johnson scored a career-high 22 points and set a new ACC Tourney freshman mark by hitting 100 percent from the field, converting 8-of-8 field goals and 6-of-6 free throws. James Dews had 15 points and DeQuan Jones had 14 points for Miami, who shot 51.7 percent from the floor, 47.1 percent (8-17) from long range and 83.3 percent (15-18) from the line, while edging Wake Forest on the glass, 39-34. Ishmael Smith had a team-high 14 points for the Demon Deacons who could not get closer than 16 points in the second half. Wake hit 35.1 percent from the field, 23.5 percent (4-17) from three and 64.3 percent (18-28) from the charity stripe.

Wake Forest, who has dropped 11 of its last 13 games, has five players averaging double-figure scoring. Travis McKie, one of just two Demon Deacons to have started all 23 games this season, averages a team-leading 12.5 points and 7.5 rebounds per game, while J.T. Terrell adds 11.8 points and Gary Clark contributes 11.2 points — including 1.9 three-pointers per game at an impressive 61.8 percent accuracy rate. Clark also puts up the team’s top shooting percentages from the floor (.533) and line (.816).

Several other returning Hurricanes have also show improved offensive output, as Garrius Adams’ hard work has resulted in a 3.5 points per game improvement, improving from 3.8 points per game as a true freshman to 7.3 points per game this season — including double-figure scoring efforts in three of his last four outings. Durand Scott has increased his shooting percentages across the board for a 3.2 points per game increase in scoring (10.3 ppg to 13.5 ppg), while Adrian Thomas has seen his scoring average increase by 1.5 points per game, to go with 1.3 additional boards per outing.

Miami has two of the ACC’s top-three most prolific three-point shooters in Malcolm Grant (2.7 pg, 1st) and Adrian Thomas (2.4 pg, 3rd)… Sixth-year player Adrian Thomas notched his first career double-double in the overtime win over Virignia, with career highs of 20 points — including six three-pointers — and 10 rebounds… Went 6-of-12 from long range versus the Cavaliers for his 11th game of the season with at least three threes… Sophomore guard Garrius Adams grabbed a career-high nine rebounds versus Virginia and has scored in double figures in three of the last four games, averaging 10.5 points per game over the that span while hitting 51.6 percent from the field and 40.0 percent from long range… Freshman Rion Brown’s confidence continues to grow — as does his time on the court — as the Hurricanes head deeper into ACC play… The Georgia native — considered one of the team’s strongest perimeter defenders — hit a deep three and sank all three free throws with just six seconds to go to send the game versus Virginia into overtime… Big man Reggie Johnson has pulled down double-figure rebounds in four of the last five games and has collected eight-or-more boards in 11 straight… Played a career-high 34 minutes versus the Cavaliers.

Dubbed the “Cardiac Kings” by Hurricanes play-by-play announcer Joe Zagacki, the Hurricanes have played seven-straight games that have essentially been decided in the final possession. Miami opened this nerve-wracking stretch with a one-point win over Boston College on Jan. 15, and then suffered four-straight losses by a combined 11 points– marking the first time in program history that UM lost as many consecutive games by less than five points. Miami followed up a two-point loss to Florida State (1/19), a two-point loss at NC State (1/23) and a three-point loss to North Carolina (1/26) with a four-point decision at Virginia Tech (1/30), before bouncing back with two-straight wins with a two-point victory over Georgia Tech (2/3) and a two-point overtime victory over Virginia (2/5).

Wednesday’s game at Wake Forest marks a homecoming of sorts for four Hurricanes — Reggie Johnson of Winston-Salem (Winston-Salem Prep), Garrius Adams of Apex (Middle Creek), Julian Gamble of Durham (Southern Durham) and head coach Frank Haith, who grew up in nearby Burlington (Western Alamance/Elon) and and served as a graduate assistant coach for the Demon Deacons in 1989-90 and as an assistant coach from 1997-2001, helping Wake Forest to four-straight postseason appearances — including a 2001 NCAA berth and 2000 NIT title.

Miami and Boston College are the only schools to have three players ranked among the league’s top-20 scoring leaders, as the Hurricanes have Malcolm Grant (15.4 ppg, 7th), Durand Scott (13.5 ppg, 12th) and Reggie Johnson (12.0 ppg, 20th) among the league’s best.

Individual game tickets for Miami’s ACC games are now on sale to the general public. The Hurricanes will host a regular slate of eight ACC games, including 2010 national champion Duke on Sun., Feb. 13. Prices for most ACC games begin as low as $15. For additional information or to order season tickets, please contact the Hurricane Ticket Office online at www.hurricanesports.com or by phone at 1-800-GO-CANES.