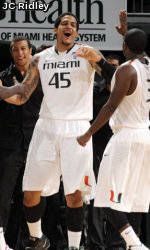 CORAL GABLES, FLA… The University of Miami men’s basketball team plays host to Virginia on Sat., Feb. 5, in its second ACC contest at home in the BankUnited Center in three days. The game, which will be available online on a pay-per-view status on HurricaneSports.com, will tip at 2 p.m.

The Hurricanes lead the all-time series, 7-4, over the Cavaliers, and have won all four meetings at home — including a 3-0 mark over Virginia at the BankUnited Center. Miami defeated Virginia, 74-62, in the last contest between the programs on Feb. 23, 2010, in Coral Gables. In that game, Dwayne Collins scored a team-high 18 points, while Julian Gamble posted a double-double of 13 points and 12 rebounds as the `Canes used an 18-5 run to turn a tie at 40 into a 58-45 lead with just over six minutes left. James Dews and Durand Scott also finished in double figures for Miami, with 13 and 11 points, respectively. Sylven Landesberg led the Cavs in one of his final appearances for them, using a 6-for-8 touch from long range to finish with 27 points.

Miami has three players averaging double-figure scoring, led by the backcourt of Malcolm Grant and Durand Scott. Scoring in double figures in 16 of his last 18 games, Grant is contributing a team-high 15.6 points and 3.6 assists per game, while converting 89.2 percent from the line (2nd in the ACC, 18th in the nation), 42.6 percent from the field and 44.4 percent from long range (tops in the ACC along with his 2.7 three-pointers per game). Despite a poor showing versus Georgia Tech after contending with the flu, Scott adds 13.8 points, 4.3 rebounds and 3.3 assists per game, shooting 44.6 percent from the field, 40 percent from three and 86.3 percent from the line (4th in the ACC). Big man Reggie Johnson has notched 10 double-doubles this season and has grabbed 10-plus boards in four straight to average 11.8 points, 10.0 rebounds and 1.3 blocks per game for UM. He and Maryland’s Jordan Williams are the only ACC players averaging a double-double.

Virginia is led by senior guard Mustapha Farrakhan with 13.1 points, 2.8 rebounds and 2.0 assists per game, while freshmen Joe Harris (1.9 three-pointers per game at 40.2 percent) and KT Harrell add 9.9 points apiece. The Cavs’ 7-foot center Assane Sene adds a team-high 5.4 rebounds an outing, while senior forward Mike Scott (15.9 ppgs, 10.2 rpg) is out for the season with a left ankle inury.

Saturday’s game versus Virginia will not be televised, but it will be streamed live online on `Canes All-Access. The service is $9.95 a month or $79.95 per year. Visit hurricanesports.com/allaccess/ to sign up.

Sophomore guard Garrius Adams has scored in double figures in three-straight games and in five of his last seven, averaging 11.3 points per game over the last three while hitting 58.3 percent from the field and 42.9 percent from long range… Freshman Rion Brown’s confidence continues to grow — as does his time on the court — as the Hurricanes head deeper into ACC play… The Georgia native — considered one of the team’s strongest perimeter defenders — grabbed a career-high eight boards in Thursday’s win over Georgia Tech… Adrian Thomas went 3-of-5 from long range versus the Yellow Jackets for his 10th game of the season with at least three threes.

Junior Malcolm Grant is among just three ACC players to lead the league in two or more statistical categories, hitting an ACC-high 2.7 three-pointers per game at a league-best 44.4 percent. Sophomore big man Reggie Johnson is the ACC’s leader in offensive boards (4.0 per game) — making Miami one of just two programs to have multiple statistical leaders (VT has leaders in assist/turnover ratio and minutes). Grant stayed in Coral Gables over the summer, working on his game and dropping some weight. The hard work is showing as the 6-1 Brooklyn native is also among just seven ACC players ranked among the league’s top five in at least four statistical categories — three-point field goals made (2.7, 1st), three-point field goal percentage (.444, 1st), free throw percentage (.892, 2nd) and minutes (32.7, 5th). In addition, he is among the ACC’s leaders in scoring (15.6, 7th) and assists (3.6, 8th), and among the nation’s leaders in both three-point field goal percentage (15th) and free throw percentage (18th).

Grant leads all active ACC players in career 3-point field goals made per game (2.18) and has hit a three in nine straight, tying for the fourth-longest active streak in the league.

All former University of Miami student-athletes are invited to Saturday’s men’s basketball game versus Virginia. The Hurricane Club is offering two complementary tickets for the 2 p.m. game. In addition, there will be a special pre-game party in the Hurricane 100 Room at 1 p.m. with hot dogs, hamburgers, chips and soft drinks for just $15. Advanced reservations and payment for the party are required. Please contact Crystal Demps in the Hurricane Club (305-284-6699/cdemps@miami.edu) to make your reservation.

Individual game tickets for Miami’s ACC games are now on sale to the general public. The Hurricanes will host a regular slate of eight ACC games, including 2010 national champion Duke on Sun., Feb. 13. Prices for most ACC games begin as low as $15. For additional information or to order season tickets, please contact the Hurricane Ticket Office online at www.hurricanesports.com or by phone at 1-800-GO-CANES.