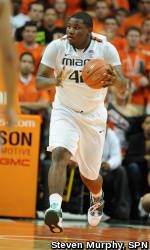 Hurricanes Back on the Court at Virginia Tech

ACC National Game of the Week

CORAL GABLES, FLA… The University of Miami men’s basketball team returns to the road to take on long-time conference opponent Virginia Tech on Sun., Jan. 30, at Cassell Coliseum. The 5:30 p.m. game will kick of an ACC Sunday Night Hoops doubleheader and be carried nationally on Fox Sports, including on FS-Florida in South Florida.

The `Canes edge the Hokies, 10-9, in the all-time series and have won two straight over Virginia Tech — including the 70-65 win during the ACC Tournament quarterfinals in Greensboro, N.C., on March 12, 2010. In that meeting, Durand Scott scored 11 of his 17 points in the final six minutes and DeQuan Jones added 14 points, while Virginia Tech’s leader Malcolm Delaney was held to seven points and 0-of-8 three-point shooting. The win sent the Hurricanes into their first-ever ACC Tournament semifinals, while the Hokies went on to the NIT.

The Hokies also have three active players averaging double-figure scoring, led by preseason All-ACC pick Malcolm Delaney. The league’s third-leading scorer and ACC leader in minutes played (37.9 per game) averages 18.3 points, 4.5 assists and 3.2 rebounds an outing, with 6.1 free throw attempts per game — tying for second most among ACC players. Jeff Allen adds 12.2 points and a team-high 9.4 rebounds per game, while sophomore Erick Green has emerged for Virginia Tech with 10.5 points, 2.2 rebounds and 2.2 steals an outing. The Hokies return to the hardwood following a 72-57 loss at Georgia Tech on Tuesday, but have won three of their last four games. The hard luck’ Canes ride a three-game skid into Blacksburg, falling by a combined seven points over that span.

Both teams will play three ACC games over the next seven days.

RECCURING NIGHTMAREThe Hurricanes have dropped three straight ACC games by a combined seven points — two points to Florida State (Jan. 19), two points at NC State (Jan. 23) and three points to North Carolina (Jan. 26). In each game, the opponent managed to hit a difficult basket within the final seven seconds of the first half, and then were able to stop Miami from scoring on its final possession of the game.

At least five `Canes have scored in double figures during the same game four times this season — as recently as Wednesday versus North Carolina, while Miami had six players in double figures in the win over McNeese State (Nov. 24).

SUITS & SNEAKERSHead coach Frank Haith and his staff is participating in this weekend’s Coaches vs. Cancer Suits and Sneakers event. It is a national event designed to raise awareness about Coaches vs. Cancer and the importance of cancer prevention and the early detection. By wearing sneakers with their suits while coaching Sunday’s game versus Virginia Tech, the Hurricanes staff is reminding college basketball audiences about the many ways people can reduce their risk of cancer, like eating right, exercising, making healthy lifestyle choices and following the American Cancer Society’s recommended cancer screening deadlines.

QUICK HITSFollowing Sunday’s game at Virginia Tech, the Hurricanes will host three of its next four at the BankUnited Center.

Durand Scott has netted double figures in 10 of the last 11 games and in 24 of his last 29 games to rank second on the team and 10th in the ACC with 13.9 points per game.

In just his second season as a `Cane, Malcolm Grant’s 115 career three-pointers is ninth among active ACC players, while his 42.4 percent career three-point field goal percentage ranks second in UM’s record book. He has hit a trey in seven-straight games, tying for the fifth-longest active streak in the ACC.

Averaging 2.3 three-pointers per game — fifth in the ACC, Adrian Thomas is on pace to climb into UM’s top five in career threes by the end of the regular season. With 157 entering Sunday’s game at Virginia Tech, he is ninth in the record books, but is on track to hit 182, which would put him in fifth place. He is just seven treys out of eighth place.

A 6-6 forward, Brown (1986-89) scored 2,270 points in a four-year career trailing only former All-America and all-NBA star Rick Barry. Brown opted to assist former UM head coach Bill Foster in restarting the Miami basketball program in 1985, helping the Hurricanes post a 65-56 record including a 19-12 mark in his final season.

During his career at Miami, he scored 30 points on nine occasions and topped the 20-point mark no fewer than 54 times. He still is the career leader at UM in field goal percentage, having made .535 of his shots from the floor and still ranks second in career free throws made. His 24.7 scoring average as a senior in 1989 is still the fifth-highest by a Hurricane player.