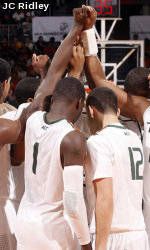 CORAL GABLES, Fla. – There are few moments in sports fandom that can compare to the energy and buzz created by a packed house. That was exactly the setting Wednesday night at the BankUnited Center when rivals Miami and Florida State met in a big-time Atlantic Coast Conference battle.

The fans showed up in full force and it had an impact. Sure, the game is won between the white lines and unfortunately for the `Canes, they came out on the losing end Wednesday night. But you’d be foolish to think that a nearly-full arena – and arguably the largest student turnout ever – didn’t play even the smallest of roles in hard-fought loss over a disliked, yet talented FSU squad.

The ACC has proven over the years to be the toughest conference in the country to win on the road. The Dukes, North Carolinas and Marylands of the world fill arenas and win games – the two go hand in hand. It goes without saying that there is a distinct advantage to those types of programs always having an energetic arena behind them every time they take to the court.

The BankUnited Center has seen its fair share of big crowds over the years, but there hasn’t been enough. There haven’t been enough nights where the student section is packed, backs are against the top walls of the arena and suites are all full.

The Hurricanes have six more home games at the BankUnited Center this season, including games against UNC (Jan. 26) and Duke (Feb. 13). There’s little doubt the fans will be back again for those games as two of the nation’s most storied programs visit Coral Gables.

But every arena in the country would be packed to see those teams. Let’s see what happens in UM’s other remaining home games against Georgia Tech (Feb. 3), Virginia (Feb. 5), Clemson (Feb. 20) and Maryland (March 2). Is it possible to repeat Wednesday night six more times? Why not? The tickets are affordable (and even free for students) and the product is highly entertaining (as anyone in the arena Wednesday night can attest).

The `Canes (12-6, 1-3 ACC) aren’t off to the kind of start in the ACC they would have hoped for, but a quick look at the conference standings show there is isn’t a whole lot of separation yet from top to bottom.

Time is on Miami’s side. There’s opportunity ahead for the fans to be too.