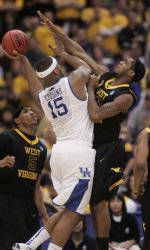 Saturday’s game is scheduled for 4 p.m. and will be televised by Sun Sports locally and on the Big East Network on FSN Pittsburgh. The game will also be available by radio on 560 WQAM (WQAM.com) and on 90.5 FM (WVUM.org).

It marks the first true road game of the season for the 5-1 Mountaineers, although they have gone 3-1 on neutral courts. West Virginia has won two straight — including Wednesday’s 71-50 win over American, with its only loss to Minnesota, 74-70, in the Puerto Rico Tip-Off finals.

The Hurricanes have three players averaging double-figure scoring led by Durand Scott’s 14.6 points and 4.6 assists per game. Reggie Johnson contributes a double-double of 12.4 points and 10.4 rebounds an outing, while Malcolm Grant adds 12.4 points– including a team-best 2.4 threes per game.

Miami has won 17 consecutive non-conference regular season games at home and is 4-0 at the BankUnited Center this season. Over the last four seasons, the Hurricanes have compiled a 42-10 (.808) record at home and are 72-27 (.727) at home in their seventh season under head coach Frank Haith — including nine wins over ranked opponents. The Hurricanes have notched double-digit home wins at the BankUnited for three-straight seasons and six times in seven full seasons calling the arena home.

DID U KNOW? Following Tuesday’s win over Ole Miss, the Hurricanes are ranked No. 39 in RealTime RPI rankings — the second-highest ranked squad in the ACC, behind Duke at No. 9. Miami has already played three road games — including at nationally-ranked Memphis, one SEC squad and faces its second Big East opponent in West Virginia on Saturday.

KEYS TO VICTORY Miami is undefeated this season when: leading at halftime, scoring 70-or-more points, shooting 40 percent or better from the field and committing fewer turnovers than its opponent.

SCOUTING THE MOUNTAINEERS West Virginia is led by three players in double figures — including the Big East’s second-leading scorer in Casey Mitchell, who puts up 22.3 points per game, converting 55.8 percent from the floor, 41.5 percent from long range (17-41) and 91.2 percent from the line (31-34). Kevin Jones adds 13.0 points and 6.0 rebounds for the Mountaineers, while Darryl Bryant contributes 10.8 points, 3.2 rebounds and 3.6 assists an outing.

West Virginia’s Darryl Bryant and Miami’s Durand Scott, both New York natives, played AAU basketball together with the acclaimed New York Gauchos and were both selected for the Jordan Brand Classic all-star game — Bryant in 2008 and Scott in 2009. Another Gauchos teammate? The nation’s leading scorer in UConn’s Kemba Walker.

The Mountaineers edge the Hurricanes, 7-6, in the all-time series and have won the last two meetings between the programs — including a 58-53 West Virginia victory in the last game on March 6, 2004, in Coral Gables — Miami’s last game as a Big East member. This will be the first meeting between the teams since Miami joined the ACC following the 2003-04 season.

Under Haith, the Hurricanes are 4-4 versus Big East teams — including a 1-0 mark at the BankUnited Center — and have won two of their last three versus Big East opponents.

LAST TIME OUT The Hurricanes defeated visiting Ole Miss Tuesday night, converting 10 of their final 11 free throws to hold off a second-half rally for the 86-73 win at the BankUnited Center.

However, the Rebels used a 29-8 run over 10 minutes in the second half to cut the Hurricanes’ lead to nine points, trailing 79-70 with 4:12 remaining in the game. But strong Miami free throw shooting down the stretch secured the 17th straight non-conference home win for the Hurricanes.

Durand Scott scored a season-high 27 points to go along with six rebounds and six assists and Reggie Johnson turned in his fifth double-double in Miami’s last six games with 17 points and 10 rebounds to lead Miami to its first statement win of the 2010-11 season. Scott finished the night 12-of-13 from the line, hitting some key shots down the stretch as Ole Miss made a late rally. Adrian Thomas hit on 4-of-5 three-point attempts in the opening period, eventually scoring a career-high 17 points to lead the Hurricanes’ perimeter game.

NEXT UP FOR THE `CANES Following Saturday’s contest versus West Virginia, Miami remains at home for another game — playing host to Stetson on Sun., Dec. 12, at 4 p.m. Steston, the alma mater of associate head coach Jorge Fernandez, has already knocked off an ACC opponent on the road this season, defeating Wake Forest, 89-79, on Nov.12.

TICKET INFORMATIONFriday is the last day to take advantage of the ACC Weekend 4-Pack, allowing fans to secure tickets to see the Hurricanes take on top-ranked Duke on Feb. 12. Individual game tickets for ACC men’s basketball games are now on sale to University of Miami season tickets holders and Hurricane Club donors. For additional information or to order season tickets, please contact the Hurricane Ticket Office online at www.hurricanesports.com or by phone at 1-800-GO-CANES.