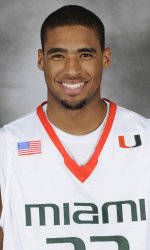 Miami jumped out to a quick 28-8 lead eight minutes into the game and the rest was history. Ten different `Canes scored by halftime as UM led 52-18 at the break. It was much of the same in the second half, with UM’s lead expanding to as much as 70 in the late in the game.

In his first game as a `Cane, Brown scored 16 – including 11 in the first half – on 5-of-7 from the field, 4-of-6 from behind the arc and 2-of-2 from the line. Jones also poured in 16, but his impact on the boards with seven rebounds helped the `Canes to huge advantage on the glass.

“Coming into the game, I met with Coach [Frank] Haith and we talked about what I needed to do to make the team successful,” Jones said. “We talked a lot about rebounding and he explained that if I put all of my energy into rebounding, that everything else would take care of itself.”

He was joined on the glass by Donnavan Kirk, who had a successful night in his return to the court with a double-double performance of 11 points (4-of-4 FG, 2-of-2 FT) and 10 rebounds. Reggie Johnson (13 points, 6 rebounds) and Malcolm Grant (15 points, 3 assists) also reached double-figure scoring.

As a team, Miami shot 55.4 percent from the field, including 50 percent (15-of-30) from behind the line. The `Canes out-rebounded Barry, 52-20, including a strong showing on the offensive glass that led to 24 second-chance points.

“I thought our defensive intensity, our stance on the ball, rebounding, blocking out and loose balls for this basketball team went really well,” Haith said. “We wanted Donnavan Kirk to get a lot of minutes and he played really well. Along with Rion Brown and these two guys [DeQuan Jones and Malcolm Grant], we really didn’t miss a lot of shots. If we shoot like that, we’ll win a lot of games.”

The Hurricanes will wrap up their exhibition schedule against Florida Southern on Monday, Nov. 8 at 7:30 p.m. at the BankUnited Center. The regular season opener is another home game slated for Friday, Nov. 12 against Jacksonville.

Garrius at the Point
A new look to the team this year will feature Garrius Adams (6 points, 3 assists) running some point. With Durand Scott and Malcolm Grant often playing together in the backcourt, head coach Frank Haith said he plans to use the 6’6″ Adams as this third ball handler. Haith praised his ball skills and likes his big frame on the defensive end.

Changes Inside the BUC
Fans will notice some slight changes inside the BankUnited Center this year during men’s games. The band has moved over into the student section, which has also been expanded to encompass all of the lower section at their end of the arena. Another noticeable change is the teams have switched benches this season, putting the visiting team down in the noisier end of the arena with the band and students.

Tickets
To order tickets for the Hurricanes’ 2010-11 season, visit HurricaneSports.com or call the Hurricane ticket office at 1-800-GO-CANES. Season tickets start as low as $99.