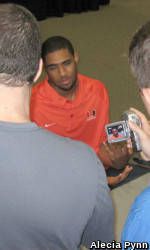 CORAL GABLES, Fla. – There was an aura around the University of Miami’s basketball media day on Wednesday that was both refreshing and eye-opening. On a day that is usually full of structure and clichés, the men’s basketball team spent a few uninhibited hours at the team’s practice facility enjoying themselves while meeting with local media before an afternoon practice.

The Hurricanes, who will open their exhibition season at home on Nov. 3 against Barry, have plenty of reason to be optimistic heading into the 2010-11 season. The same young group that made an impressive run in last year’s ACC Tournament is a year older and clearly much-improved with a new crop of talent joining the mix.

The attitude of the team might be the biggest difference, however. You can see it in the way the players carry themselves and their consistent message they are delivering to anyone willing to listen.

“I think we are going to be really good,” junior guard Malcolm Grant said. “I just feel the vibe is different this year…everybody’s on the same page. I think the guys that have returned have done a good job showing these younger guys what it’s going to take to win in this league. And I think they’re doing a good job of buying in. I think we have a chance of finishing at the top of the league this year.”

Grant, a mature and experienced guard, was praised by head coach Frank Haith Friday for being the guy he wants his players to emulate, both on and off the court.

“It’s a great learning experience for all of our guys to see him play this way, because he is the one guy that was here this summer every day, working with our strength coach,” Haith said. “He hasn’t gone anywhere. He has lived in Miami working religiously on his game. He’s had a great fall, a great start of practice. I’m really excited about him as well as a lot of guys, but I want to talk about Malcolm a little bit because it’s been a joy watching his development from last year to this year.’

Along those same lines, his backcourt mate Durand Scott has taken on an increased role entering his second season in Coral Gables.

“I have seen a drastic change in Durand,” junior forward DeQuan Jones said. “I mean he’s one of those kids who was naturally born to lead. He has an ambiance about him that makes you want to follow him. Now he’s really tapping into who he is and how he is going to lead the team vocally and by example.

“In practice every day he gets guys going, he’s always saying `screen left, screen right.’ He gives you confidence on the court….you know he’s there. The guys are ready to rally behind him and win some games.”

Those guys were coincidentally led into the media day rounds by Grant and Scott, along with junior forward Julian Gamble. And as the rest of the players filtered in throughout the afternoon, you could see one by one that these players are enjoying their time together and embracing the opportunity to be a part of this team as the season draws near.

“We have so many expectations and so many things to look forward to,” sophomore guard Garrius Adams said. “We are going to be one of the really good teams in the ACC because of how hard we have worked so far and how hard we are going to work. We have the talent and the drive to keep pushing to get better.”

Those expectations were a big topic of discussion amongst Haith, the players and media. But it was the individual stories told Wednesday that provided the most insight into this team’s identity.

The players first met with print media at tables set up side-by-side. Grant talked about his weight loss, with stories about avoiding McDonalds and eating healthy with big man Reggie Johnson, who has lost 56 pounds according to Haith. Scott discussed his recent experience at Chris Paul’s basketball camp. Johnson talked at length about his summer in China playing with Athletes in Action and the influence it had on his development. Down the line, everyone had something interesting to say.

The players weren’t done there though, as one by one they moved on to TV and phone interviews, likely telling similar versions of the same stories.

Eventually though, the players all gathered around the final two stations of the day – one with WQAM’s Josh Darrow and the other with UM’s Director of Marketing Max Lorber.

It was the end of the line for the group and an opportunity to let loose a little. Guys were playfully distracting each other as they attempted to read scripts. Others were gathered around as one player interviewed another as another worked the camera.

They were moments behind the scenes that provided unique access to a group full of characters….the same group that spent the two hours prior discussing improvement, camaraderie and the upcoming season.

“I’ve got great expectations for this team,” Scott said. “I just feel that we’re going to do really well this year. Adding those freshmen that are coming in, we have a chance to really do something special and transform this team.”

That process appears to be well on its way.