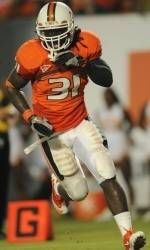 CORAL GABLES, Fla.– University of Miami football student-athletes Sean Spence and Andrew Smith have been recognized as national players of the week by the College Football Performance Awards. Both players earned honorable mention honors – Spence at linebacker and Smith on the defensive line.

Spence led the `Canes with nine tackles and Smith had two sacks and three tackles for a loss last week in Miami’s 31-3 win at Pittsburgh. Spence had six solo and three assisted tackles to go along with 1.5 sacks and 2.5 tackles for a loss. Smith – who had four total tackles against the Panthers – had a breakout game, consistently getting into the backfield and putting pressure on the quarterback.

Earlier this year, Travis Benjamin, Lamar Miller and Matt Bosher were recognized by the College Football Performance Awards after their performances at No. 2 Ohio State.

The Hurricanes will play at Clemson at noon on Saturday, Oct. 2. The game will be televised live on ESPN2 and ESPN 3D.