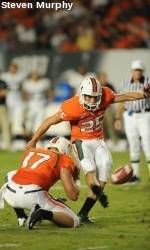 CORAL GABLES, Fla. – Senior placekicker and punter Matt Bosher has been named to the 2010 preseason watch list for the Lou Groza Award, given annually to the nation’s top kicker by the Palm Beach County Sports Commission.

Bosher has a career success percentage of 88.9 percent in field goals. He enters the 2010 season as the most accurate returning kicker in the nation having made 32-of-36 field goals attempts.

Kickers on the Lou Groza Award Watch List were chosen based on statistics from the 2009 season and 2010 pre-season expectations.

The Pac 10 leads all conferences with six players on the list. The ACC and SEC have landed 5 kickers each. The Groza Committee will be watching all FBS kickers during the season, and releasing a weekly “Stars of the Week” feature on www.lougrozaaward.com.

Accomplishments are tabulated throughout the season and the Lou Groza Collegiate Place-Kicker Award announces its 20 semi-finalists on Friday, October 29, 2010. From this list, a panel of over 300 experts selects the top three (3) finalists for the award by Monday, November 22, 2010. That same group then selects the national winner which will be announced Thursday, December 9, 2010, during the Home Depot ESPNU College Football Award Show, broadcast live from Orlando, Fla.

The 19th Annual Lou Groza Collegiate Place-Kicker Award, presented by the Orange Bowl Committee, recognizes the three (3) finalists during an early week celebration in Palm Beach County, culminating with a gala awards banquet on Dec. 7, prior to joining ESPN in Orlando.

The award, is named for National Football League (NFL) Hall of Fame kicker Lou “The Toe” Groza, who played 21 seasons with the Cleveland Browns. Groza won four NFL championships with Cleveland and was named NFL Player of the Year in 1954. Although an “All Pro” offensive lineman, Groza ushered in the notion that there should be a place on an NFL roster for a kicker.

For more information regarding the Lou Groza Collegiate Place-Kicker Award and to follow the season progress, please go to www.lougrozaaward.com.