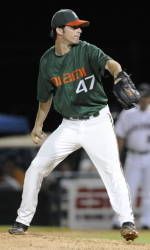 GAINESVILLE, Fla. – The 10th-ranked University of Miami baseball team lost the opening game of the 2010 Gainesville Super Regional, falling 7-2 to No. 3 national seed Florida Friday night at McKethan Stadium. The Gators scored three runs in the third inning and three more in the fourth and never looked back, easing to the five-run victory and putting the `Canes in a must-win situation on Saturday.

The Hurricanes dropped to 43-19 with the loss while Florida improved to 46-14. UF starter Alex Panteliodis (11-2) kept the UM offense at bay all night, tossing a complete game while holding the `Canes to two runs on three hits. He walked just one and struck out a career-high 12.

Yasmani Grandal supplied all of Miami’s offense, hitting a two-run homer in the top of the fourth to pull UM to within one, but Florida responded with three in the bottom of the frame to put the `Canes away.

Jonathan Pigott (2-for-4, two runs) and Brian Johnson (2-for-4, one RBI) each had two hits for UF, while Austin Maddox and Mike Zunino each had two RBI. Tyler Thompson homered and scored a pair of runs.

Both teams were held off the board until the bottom of the third inning, when a UM error led to three unearned runs for the Gators.

Grandal cut UF’s lead to just one with his opposite field blast down the line in right, scoring Lawson who had singled to lead off the inning.

Two of the three Gators’ runs in the fourth came off UM’s second error, while a solo homer to right-center by Thompson in the fifth closed the scoring for the night.

Game two of the best-of-three Super Regional will be shown live on ESPN2 Saturday night at 7 p.m.