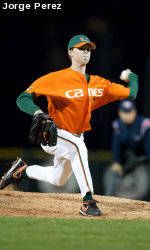 CORAL GABLES, Fla. – Despite another solid night from its pitching staff, No. 9 Miami dropped game two of its series with top-ranked Virginia, falling 3-1 Friday night at Alex Rodriguez Park.

Miami (39-14, 20-9 ACC) was held hitless through the first five innings and suffered from an early error that led to two unearned runs for Virginia (44-10, 22-7 ACC) in the third inning. The `Canes finished with just four hits as a team, their lowest total since recording four against Florida on March 7 earlier this season.

With the win, the Cavaliers clinched the regular season ACC crown, while the loss moved the `Canes into third in the Coastal Division and fourth in the seeding for next week’s ACC Championship in Greensboro.

The teams will decide the series and wrap up their 2010 regular season slate Saturday at noon.

Chris Hernandez (8-3) suffered the loss for the `Canes despite just one of his three runs allowed being earned. Hernandez struck out nine but allowed five hits and a career-high five walks. Sam Robinson tossed a scoreless 2/3 innings before E.J. Encinosa struck out five and did not allow a hit over the final 2 2/3 innings.

UVa starter Robert Morey (9-2) earned his team-leading ninth win, allowing just the one run on three hits while walking four and striking out five. Morey did not allow a hit until the sixth inning when Frankie Ratcliff singled to left with one-out. Following Morey, Cody Winiarski and Kevin Arico each tossed a scoreless inning. Arico earned his ACC-leading 14th save.

Chris Taylor had two of UVa’s six hits, going 2-for-4 with an RBI and run scored.

Virginia’s unearned runs in the third came on a Dan Grovatt RBI single and a Steven Proscia RBI groundout.

The Cavaliers added another run an inning later when Taylor singled to center with runners on the corners.

The `Canes finally got to Morey in the sixth, scoring a run to bring the score to 3-1. Ratcliff’s single started the rally, before a line drive single off the wall in right by Grandal put runners on the corners. Martinez then drove the first pitch he saw into center, scoring Ratcliff for what would prove to be the Hurricanes’ only run.

Miami’s best chance to mount a rally later came in the bottom of the eighth, when a hard hit, bases loaded grounder with one out off the bat of Martinez was turned for a 1-2-3 double play.

Right-hander David Gutierrez (5-0, 4.00 ERA) will start for Miami on Saturday while the Cavaliers will counter with ace Danny Hultzen (7-1, 1.98 ERA).