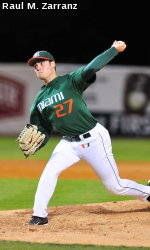 Hernandez Strikes Out 13 as No. 7 Miami Rolls Past Barry

Hernandez and three relievers combined for the four-hit shutout and the `Canes struck out a season-high 19 as a staff as Miami improved to 35-11 overall.

Hernandez (7-2) allowed just two hits, didn’t walk a batter, and struck out 13 of the 21 batters he faced en route to his team-leading seventh win of the season. E.J. Encinosa tossed two hitless innings while striking out four of the six batters he faced. Sam Robinson and Eric Whaley combined to pitch the final inning and each had a strikeout. In addition to striking out 19 batters, the four Miami pitchers did not walk a single batter all night.

Ratcliff finished the day 2-for-3 with a three-run homer and a RBI single while Melendres went 2-for-3 with a double, a single, two runs scored and two RBI.

Barry starter Brian Santana (3-1) suffered the loss, allowing six runs on six hits while walking one and striking out five in 4 1/3 innings. Corey Witkowski and Tyler King combined to toss the final 3 2/3 scoreless. The Buccaneers (32-18) top four hitters in the line-up each had a hit.

After going hit-less the first two innings, Miami broke out for four runs on three hits in the third to take a 4-0 lead. Michael Broad led off the frame with a single to left before a double to left-center by Melendres scored Broad for the game’s first run. A Zeke DeVoss walk put runners on first and second before Ratcliff smacked his three-run blast to right-center two batters later.

Melendres and Ratcliff were at it again in the fifth as Melendres hit a solo homer to center to lead off the inning before Ratcliff singled home Perez later in the inning to give UM a 6-0 advantage.

The Hurricanes and Buccaneers will wrap up the two-game series Saturday night at 7 p.m. Righty Jason Santana (4-2, 5.01 ERA) will start for the `Canes while Barry will counter with righty Scott Sexton (2-5, 6.04 ERA).