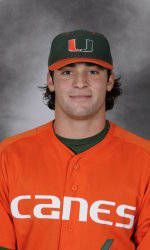 CORAL GABLES, Fla. – The 11th-ranked University of Miami baseball team used back-to-back five-run innings in the fourth and fifth to pull away for a 14-7 win over USF Wednesday night at Alex Rodriguez Park. The Hurricanes (31-11) hit three home runs on the night en route to their seventh straight mid-week win and 11th-straight home victory.

Chris Palaez went 4-for-5 with four runs batted in, driving in a single run in each of his first four at-bats. Michael Broad, starting at second base for the first time this season, went 3-for-4 with a homer, two RBI and two runs scored. Harold Martinez went 2-for-5 with his team-leading 14th homer of the season while Ryan Perry extended his home run streak at home to five straight games with a three-run blast in the fourth that broke the game open.

Miami starter David Gutierrez (5-0, 4.29) allowed four runs and struck out five in five innings, earning his fourth win in as many starts this season. E.J. Encinosa tossed two scoreless in relief of Gutierrez, while Jerad Grundy and Iden Nazario each tossed an inning and allowed an earned run a piece.

Andrew Salgueiro (1-1, 6.43) took the loss for the Bulls, going 3 2/3 innings and giving up seven earned runs on eight hits. Luis Llerena went 3-for-5 for USF, while Jonathan Koscso had two hits and two RBI.

Run-scoring singles by Pelaez in the first and third put the `Canes up 2-0 after three.

USF tied the game in the top of the fourth on a two-run home run by Sam Mende.

Miami re-gained the lead for good by plating five runs in the bottom half of the fourth. Chantz Mack scored first on a throwing error by Eric Sim. Perry’s three-run bomb then pushed the score to 6-2 before a Pelaez RBI double made it 7-2.

USF scored two in the top of the fifth but the `Canes added five more in the bottom of the fifth to make it 12-4.

Broad and Martinez hit late homers and USF added a run in the eighth and two more in the ninth to close the scoring at 14-7.

Prior to the game, former Hurricane and current Florida Marlin Gaby Sanchez threw out the ceremonial first pitch.

Next for the Hurricanes is a three-game series with Maryland this weekend at Alex Rodriguez Park. Game one will be Friday at 7 p.m.